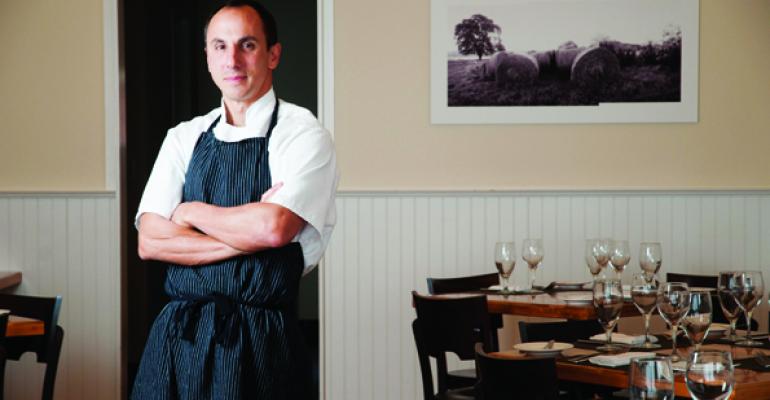 Despite 13 years in operation and glowing local and national reviews, Michael Leviton’s Lumière restaurant is still considered a hidden gem, underappreciated by many even in nearby Boston because of its location in suburban Newton, Mass.

That point was underscored just two months ago as part of a Boston Globe story on the city’s 10 most underrated restaurants.

“Since 1999 this little bistro has been serving beautiful food, from seared sea scallops with succotash salad to lamb with ratatouille and tapenade jus,” wrote Devra First, the Globe’s restaurant critic and food reporter. “The service is good, the atmosphere is upscale but not stuffy, and the prices are reasonable. And few chefs care more about what they are doing.”

Leviton can’t fathom how anyone could not have heard of Lumière given its national acclaim.

Leviton is known for his French-inspired, simple cooking using seasonal, local ingredients. In 2010 he was named chair of the Chefs Collaborative, a nonprofit network of culinary professionals dedicated to promoting sustainable food supplies. In 2011 Leviton opened Area Four, a casual coffeehouse by day that boasts a bar and wood-fired oven for the evening. The restaurant in Cambridge, Mass., also specializes in local, organic and sustainable products.

“Leviton was doing farm-to-table-style cookery before such a thing was a buzz term or way to garner attraction to a restaurant,” said Leah Mennies, food editor of Boston Magazine. When he first opened Lumière, she added, “he was able to push boundaries by exposing people to hyper-diligently-sourced cuisine.”

Now, given his leadership of Chefs Collaborative, “he has certainly influenced locavore practices on a national scale,” she said.

“My original vision was a nice suburban bistro,” Leviton said, recalling Lumière’s debut in 1999. “But that got away from us. I didn’t anticipate how much Newton was ready for the kind of [local, seasonal] food I wanted to do. The economic climate was beautiful, and Newton was under-restauranted. What we thought would be a nice first year, we almost doubled that.” 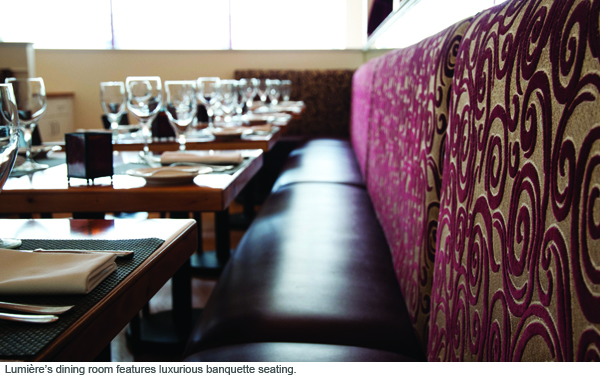 Leviton said he thought it would take four to five years to develop his clientele, at which time he’d be able to move into the higher-end fresh and local food he wanted to develop. Instead, “it took all of a few weeks,” he said.

Leviton credited his culinary skill to the training he received from Joyce Goldstein at Square One; Alain Rondelli at Ernie’s; Gilbert Le Coze, François Payard and Eric Ripert at Le Bernardin; Elka Gilmore at Liberté and Elka; and Daniel Boulud at Le Cirque.

His knowledge of flavor he credits to Goldstein, who he noted made everything from scratch each day and has an incredible palate. He also said Boulud taught him just how much he could put up with and how hard he could work, both necessary skills when opening a restaurant.

Lumière guests dine in a room that is simple but elegant, with copper mesh lampshades, warmly hued furniture and white muslin draping the ceiling. The restaurant epitomizes casual fine dining, requiring no jackets but offering upscale service and fare. Guests can order from the à la carte menu, the $45 fixed-price menu or the $70 chef’s tasting menu. Leviton said he initially resisted offering a chef’s tasting menu but later added it to accommodate customer requests.

The key to Lumière’s success isn’t “all that much about the food but how we take care of the people and put together the whole package,” Leviton said. “While we try to serve excellent food, what we’ve learned is that people want to be recognized, they want to be taken care of, and they want to be treated like a regular.”