A traditional Chicago hot dog is a complex preparation. Frankfurters in poppy-seed buns are topped with mustard, sweet relish, chopped onions, tomatoes, a pickle, sport peppers and celery salt. It’s a lot of work. Chicago-based company Big Fork has provided a solution to that with a sauce, developed during the pandemic, that delivers all of those ingredients in one bottle.

Preparing chiles, especially dried ones, for cooking requires that they be rehydrated, peeled, stemmed and seeded. Megamex, a division of Hormel, has a solution in the form of shelf-stable pre-made pastes suitable for, among other things, preparing birria, the super-trendy meat stew now being served in tacos across the country.

Chewy tapioca pearls called boba, popularized in Taiwan, have been plopped into sweetened iced tea in coastal cities for a while now. But the textured treat is finding its way into other foods, such as the ice cream containing little boba balls that was being handed out by Little Jasmine.

You might be thinking that this is plant-based protein, but mushrooms aren’t plants: They’re fungus. And this product from Fable Foods is less processed than most of the plant-based protein on display, and lower in waste as it uses the shiitake stems, which are often discarded, rather than the popular caps. Those are mixed with tapioca, coconut oil, salt and pepper for a meat substitute, presented at the show tossed with barbecue sauce.

Regal Harvest presented this product, from the Indian state of Punjab, made by smoking the already fragrant rice with willow wood. The exhibitor said the smoked rice is starting to gain traction at barbecue restaurants.

Mochi Movement presented a wide variety of items made with mochi, a chewy combination of glutinous rice flour and tapioca starch that the Japanese have long enjoyed as snack or a coating to ice cream. They offered it cooked into doughnuts, in pancakes and as pastry balls, among other options.

Hatch green chile is one of the trendiest hot peppers around — a seasonal specialty that is harvested in New Mexico in late summer and early fall. Young Guns displayed foodservice-sized bottles of it produced using all-natural techniques.

The company from north county San Diego is not new; it has been growing microgreens, edible flowers and tiny vegetables for some 30 years, but their exhibit showed just how spectacular plants can be when presented as plants. The Sunset Trumpet Mix of small bright red and yellow flowers burst with sweet and fruit flavors, the oyster leaf wrapped around an ice bud tasted remarkably like a fresh oyster, though still very clearly plants, and the green apple sorrel — well, it tasted like a green apple. 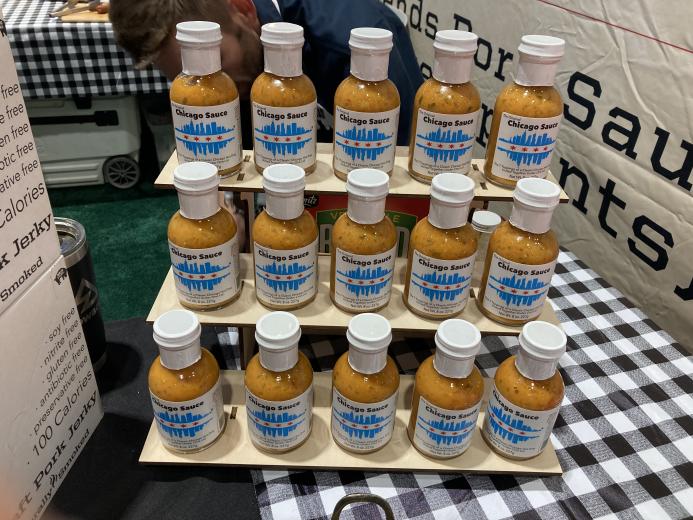