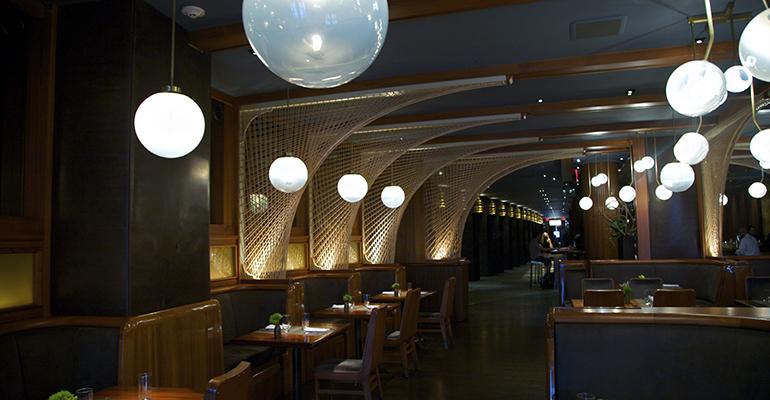 Barry Winiker / The Image Bank
Market research firm Datassential's founder Jack Li presented how to get customers back into restaurants during a Restaurants Rise powered by MUFSO presentation.
Menu

Making global flavors approachable is a key to success

Americans are cautiously venturing back out into the world as they emerge from the abject fear that gripped many of them as the coronavirus pandemic struck in March, but how to coax them back to restaurants depends on who they are and on what you’re serving them, menu trend expert Jack Li told attendees of Restaurants Rise Powered by MUFSO.

In a virtual seminar titled “All Together Now? Consumers’ Diverging Paths to Recover,” sponsored by Certified Angus Beef, Li, founder of menu research firm Datassential and its self-styled “Haiku Master,” said that operators have to assure customers that their restaurants are safe, and then they have to offer them the food that they’re looking for.

Li said that, as the pandemic enters its eighth month, consumers’ mindset has moved from an irrational one of “fear” to one of “caution” in which they and the businesses they patronize have some level of control over their safety.

He said that, of the consumers surveyed by Datassential, 83% said restaurateurs should require guests to follow safety guidelines such as wearing masks and practicing social distancing. But what they perceive as safe tends to vary based on their age. 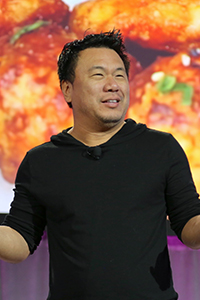 He said consumers tend to feel safer getting food in their cars, with 78% feeling safe and comfortable going through a drive-thru and 72% getting curbside pickup, compared to 50% who are comfortable dining outdoors and 38% dining indoors.

“The car has become sort of an extension of us as people,” Li said. “It sort of gives us a portable cocoon that we could take with us wherever we go, and you want to make sure that you respect that — that you don’t violate that vehicle’s space, that you’re not poking your head into the driver’s window as you’re handing their food at the drive-thru, for instance.”

Once you’ve assured them that your restaurant is safe, you have to give them a reason to leave their homes.

While early on in the pandemic consumers were craving comforting items such as grilled cheese sandwiches and mac & cheese, they want something different now, Li said.

“Seven months of eating comfort food, eating stuff inside the house, not having a hug from anyone outside of our immediate family — through all of that food boredom has really started to settle in,” he said, noting that 65% of survey respondents said they’re tired of cooking at home, and 79% said they’re craving something new.

He said that, in particular, they wanted food that they could not easily make at home, or that they didn’t make at home, and that was of restaurant quality. The foods most craved by the people surveyed were Chinese food and Sushi, although other Asian cuisines, pizza and Mexican dishes also ranked high.

“This is actually how we excite people: We show them foods and flavors that they couldn’t make from home, and we borrow from … around the world,” he said. 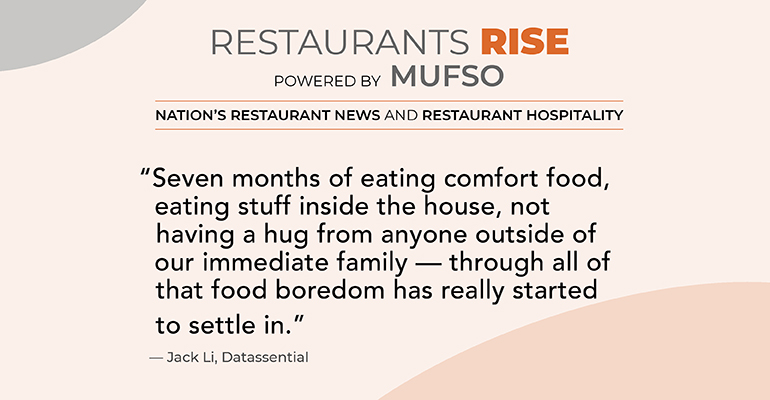 But what particular flavors or ingredients do you offer? The good news and bad news is that depends.

Li said that if you asked him 20 years ago what the big trend of the year was, he or one of his colleagues could have told you, but those days are over.

In fact, he said that Datassential had identified 363 trending ingredients.

He compared that fragmentation to what has happened with media: In the 1980s, you could guess with a pretty high level of certainty what your colleagues had watched on TV on any given night.

“Try doing that now, given all the stuff that you could watch on Netflix, all the content on YouTube, the way that content has been totally fragmented in our lives. I’d have not a chance in hell in guessing what you watched yesterday.”

He said an approach to drawing customers in with trendy ingredients while not scaring them away with weirdness is what he calls “fuesbiquity” — taking ubiquitous items like pizza, burgers and salads and adding a globally influenced flavor.

In general, ingredients enjoyed more by Baby Boomers than other age groups — such as meat loaf sandwiches, split pea soup and pineapple upside down cake — are trending down on menus, whereas items preferred by people in Gen Z, such as smoothie bowls, ramen, boba and s’mores, are trending upward. So are those ingredients favored by Millennials, born between 1980 and 1995, such as sushi, cold brew coffee and barbecue chicken pizza.

More broadly, he said, members of Generation X, born between 1965 and 1980, tend to prefer premium products, Millennials like “authenticity,” and members of Gen Z want things that are fun, unique and personally distinctive, Li said.

That’s why as Gen X’s disposable income rose, so did interest in items like Angus and Kobe beef, wood-fired items and other foods and techniques that called out “premiumness.” 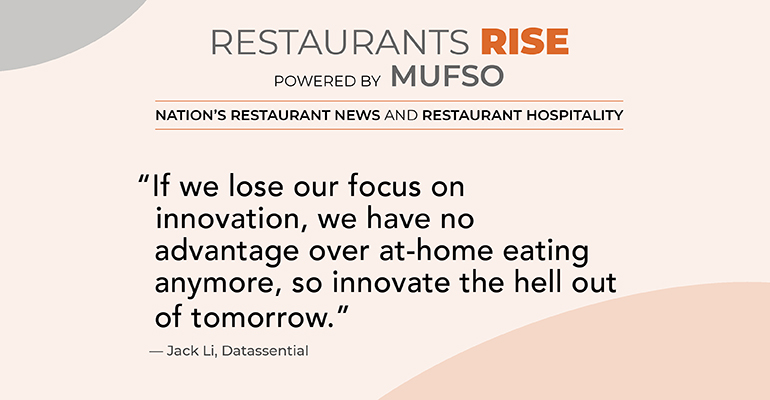 Once Millennials came along there was an interest in artisanal and chef-driven foods with global flavors, Li said.

Finally, he said, consumers have shifted their interest beyond the usual four factors used to decide what food to buy:: Taste, convenience, affordability and familiarity. Now, they’re also looking to buy food and support brands that amplify their personal values, whether that’s the environment, social justice, veterans’ causes or other issues.

“This was not so much the case historically, but it really seems like it’s becoming the case now,” he said, adding that the overriding cause motivating younger diners is climate change.

He said that cause, and others that are priorities for your customers, should be considered as you develop your menu and the messaging around it, but that above all else you must continue to excite your guests through innovation.

“If we lose our focus on innovation, we have no advantage over at-home eating anymore, so innovate the hell out of tomorrow.”