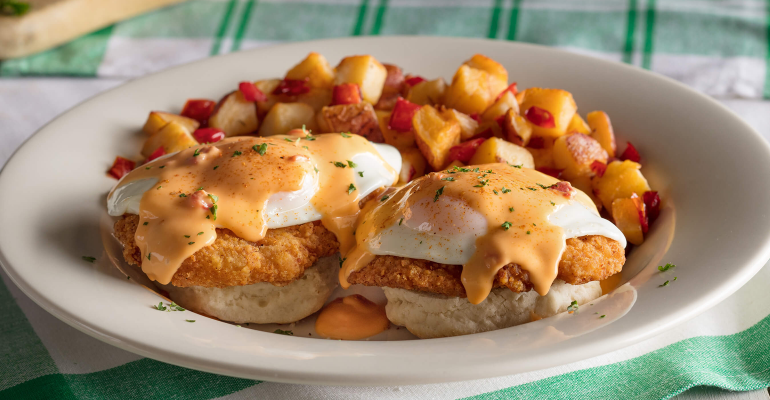 Cracker Barrel Old Country Store Inc. will launch bowl meals on Monday and has set an April 9 date for the systemwide rollout of its new specialty coffee platform, the company said this week. Cammie Spillyards-Schaefer, vice president of culinary and menu strategy for the Lebanon, Tenn.-based company, said the bowls are Cracker Barrel’s inaugural step into the composed-dish item.

“This is our first ever foray into bowls,” she said in an interview Wednesday. “It’s a trend that has been popular with Millennials, but in all of our testing it is resonating with our core guests as well.”

Cracker Barrel, which has been testing specialty coffees in some units since fall, will roll that beverage program out to the full system in April, Spillyards-Schaefer said.

“We are launching a whole new line of crafted coffees,” she explained. “Up until now at Cracker Barrel you were able to have this really great traditional cup of coffee, but no specialty coffees. Now, we’re doing these awesome espresso drinks that are finished with steamed milk and crafted with flavors and seasonal flavors.”

Sandra Cochran, Cracker Barrel president and CEO, in a September earnings call said the iced and flavored lattes would amplify other menu offerings.

“We believe the platform will strengthen our breakfast-all-day offerings,” Cochran said, as well as increasing average check and heightening guest perceptions of menu variety.

“We’re used to cooking to order,” she said.

The three Southern Bowls, priced at $8.99 each and offering through May 6, feature “traditional Southern favorites and put a new spin on them.

“It’s a composed meal,” Spillyards-Schaefer said in an interview Wednesday. “You get layers of flavor, layers of texture. They are visually appealing, and every bite has the full flavor and texture of the dish.”

The three limited-time offerings are: “Everything we do at Cracker Barrel is rooted in our traditional country favorites,” Spillyards-Schaeffer said. “They do have a new Southern twist to them. The pimento cheese is in a sauce that’s based on a rich, creamy hollandaise. Green tomato gravy is a classic Southern sauce that’s delicious and tangy,”