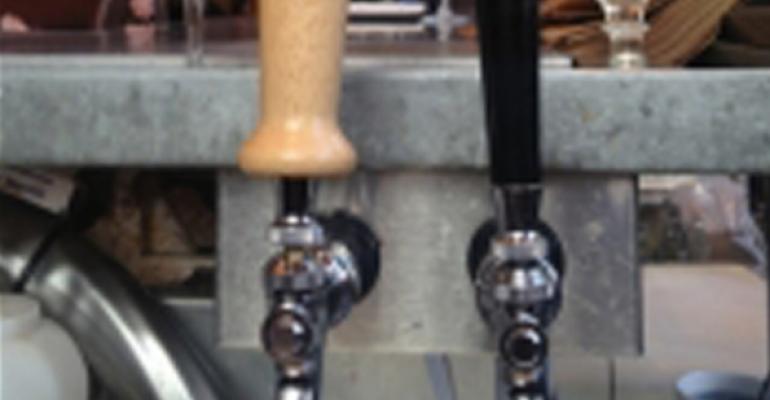 When a bar tosses around esoteric ingredients like habanero tincture, house-made lime cordial, Lillet foam and tomato water, it’s handy to have a libation or two on tap that can be served with just a flick of the wrist.

“These are craft cocktails, so there is a little bit of time put into them,” said Almy. “Last night there was a ticket rung with literally every single cocktail on our menu. You are talking about one minute per cocktail. That may not sound like a lot, but when you have 15 cocktails, it’s 15 minutes.”

However two of her unique offerings can be handed to customers considerably quicker. One is the Grand Old Fashioned, made with Cognac, Green Chartreuse, Angostura bitters and lemon oil, served over ice and priced at $9. The other is shots of Green Chartreuse, a French herbal liqueur, priced at $5.

A guest can have a Grand Old Fashioned in front of them in about 15 seconds and shot of the liqueur even quicker than that, because both are available on tap.

“I think when people see something on tap, they sometimes assume it is not necessarily a quality product, maybe light beer,” said Almy. “But these are really great additions. You are getting well-crafted drinks with quality ingredients, but at a much larger turnover.”

Yet another advantage is consistency. Since the Grand Old Fashioned is made in keg-sized batches, each serving tastes exactly the same, Almy said. “I think it is extremely important in any bar program that cocktails are consistent,” she added.

Liqueurs on tap, along with craft cocktails on tap, have become trendy in some forward-thinking watering holes in major cities. At Grand Cafe, off-duty employees from other restaurants in particular find a quick shot of Green Chartreuse a good way to get the evening rolling. The café is one of only two places in the country that serve it on tap, according to Almy.

“We wanted to do a straight spirit, and since we are a French concept, that was the automatic light bulb above the head,” Almy said of Chartreuse.

Also popular with the industry set is the house combo — a shot of the liqueur and a Kronenbourg beer, priced at $8.

“Most people are not familiar with it, so it’s a great, amazing talking point,” Almy said. “People are like, ‘Cocktail on tap? What’s that?’ I say, ‘Here’s a tap handle. I pull it.’”