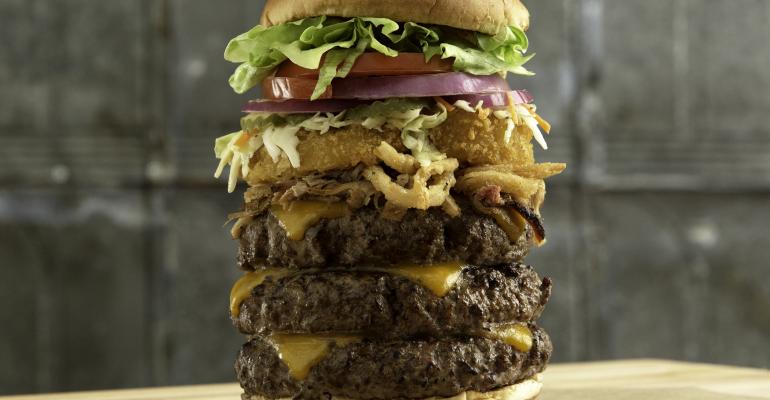 The Anti-Goldilocks syndrome: Tiny bites and extra-large meals are dominating menus instead of ‘normal’ portions

The concept of the disappearing middle is most often employed by economists to describe the state of the American middle class, but lately restaurateurs seem to have taken the notion to heart as they develop menu items at both extremes of the size spectrum.

It’s a small world after all. Officially, sliders are the small, square hamburgers created in 1921 by White Castle founder Billy Ingram, but unofficially the term is freely applied to almost any petite sandwich. The recent past has seen an uptick in new-age versions trading on consumer awareness of and fondness for the iconic small bites.

Last fall, Subway launched a line of Subway Sliders that included Little Cheesesteak and Italian Spice versions, earning bonus points for their use of the specialty Mexican telera roll. Hard Rock Cafe’s new Whisky Bacon Jam Sliders use American cheese and a crispy onion ring in addition to the titular ingredients, and they are served on a toasted brioche bun.

Arby’s sliders, meanwhile, occupy their own section of the menu with more than half a dozen choices like the Pizza Slider, which puts salami, pepperoni, Swiss cheese and roasted-garlic marinara on a mini bun; or the Buffalo Chicken option, which is doubly sauced with Parmesan-peppercorn ranch and spicy Buffalo.

Related: Lemons and limes, both preserved and fresh, perk up menus as spring approaches

By contrast, Aventura, Fla.-based Smokey Bones Fire and Grill kicked off the New Year with sliders that reflect that chain’s barbecue expertise, including a Burnt Ends Slider, spiced meat cut from the point-end of the brisket, and a Smoked Bologna Slider with a South Carolina barbecue mustard glaze topped with cole slaw and a pickle. The latter neatly marries twin trends of regional barbecue and the bologna revival, which in this case is thick-sliced and house-smoked.

Of course, the OG of slider-dom hasn’t been sitting still. White Castle rolled out Panko Breaded Fish Sliders topped with American cheese as a Lenten special in February; and other creative choices include the Impossible Slider with smoked cheddar cheese and the Chicken and Waffles Slider with country gravy sandwiched between two tiny Belgian waffles.

But bigger is better too. For many diners, size equates to value, and super-sized food and big-gulping beverages have long been reliable traffic drivers. The most recent outsized options, notably McDonald’s Double Big Mac and Taco Bell’s Triplelupa, caused The Washington Post to suggest that recent Covid 19-induced woes has led to “fat and salt and calories as empty as the hand-sanitizers shelves in the supermarket.” That may be a rather stern view of patron comfort with familiar products.

As the name suggests, the Double Big Mac is topped with four all-beef patties along with the classic fixings, while the Triplelupa is a little more architecturally complex. It comprises three Chalupas with a perforation separating each, one end of which is made with nacho cheese, while the opposite end contains creamy chipotle sauce. The middle contains a bit of both. Taco Bell teamed up with Tik Tok for the product launch and generated multitudes of 15-second responses to the product, predictably ranging from pure snark to utter rapture.

Smokey Bones, however, covers all of the bases, from its modest sliders on the one hand to its gargantuan SmokeStack Burger on the other. The latter clearly appeals to plus-sized appetites with three half-pound patties; cheddar cheese; house-smoked, hand-pulled pork; onion rings; onion tanglers and coleslaw.

Will the middle hold? Cooler heads and older hands recognize the pure promotional value and fun factor of foods both very small and extremely large. A treat that fits certain moods and dining occasions, there’s no danger that they will replace patrons’ predilections for just-right sized menu items.