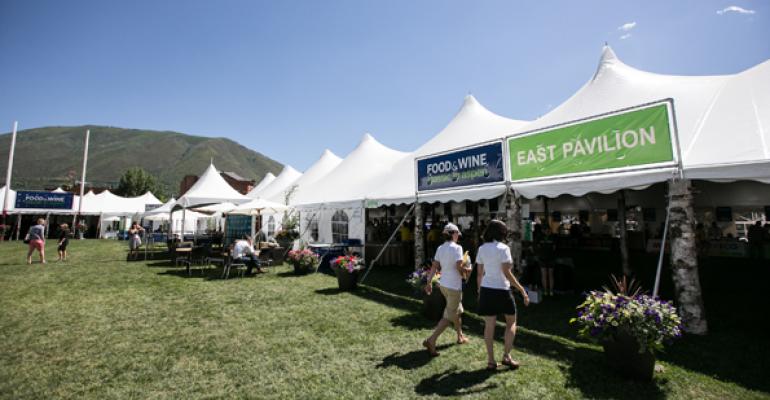 NRN&#39;s senior food editor Bret Thorn is on the scene at the 2014 Food &amp; Wine Classic in Aspen. Follow him on Twitter at @foodwriterdiary (hash tags: #FWClassic and #amextrade) and read his coverage on NRN.com.

American Express is giving more networking time to the more than 500 restaurant professionals attending its seminars during the upcoming Food & Wine Classic in Aspen as it stacks fewer sessions with a more concentrated group of talent.

“Each of the panels have such big names to them, we wanted to give people more time to enjoy the classic and have the business meetings they need top have,” American Express Company director of corporate affairs and communications William Tsang said, adding that the trade program, which celebrates its 25th anniversary this year, is all about sharing ideas.

“While folks can learn during the panels, we felt it was more important for attendees to have time to mingle and share best practices and network,” he said.

The trade panels begin at 9:15 Friday morning with a discussion to be moderated by television personality Andrew Zimmern. On that panel, titled “Meet the Masters: 25 Years of Excellence,” will be San Francisco Bay Area chef and restaurateur Michael Chiarello, Barbara Lynch of Barbara Lynch Gruppo in Boston, Danny Meyer of Union Square Hospitality Group based in New York, and chef and cookbook writer Jonathan Waxman of Barbuto in New York. Tsang noted that the panelists will be sharing information on the latest trends, as well as tips for long-term survival in the competitive restaurant industry.

“American Express has been a fantastic partner for our businesses over the course of many years, and I’m always delighted to have the opportunity to share and exchange learnings with leading colleauges from our industry,” Meyer told NRN.

That afternoon, from 1:30 p.m. to 2:45 p.m., Chicago food TV personality Steve Dolinsky will be moderating a discussion on beverage programs, an aspect of foodservice that is becoming increasingly crucial in making restaurants profitable.

On the panel will be Dave Arnold, a pioneer in molecular mixology, founder and president of the Museum of Food and Drink — which is currently holding pop-up events as work continues on its building in New York City — and owner of Booker & Dax, a cocktail bar attached to Momofuku Ssam Bar in New York. Other panelists include Charles Joly, beverage director of the Aviary in Chicago and founder of Crafthouse Cocktails; and Kimberly Patton-Bragg, head bartender of Tivoli & Lee in New Orleans. Cocktails will be served as part of the panel.

Dolinsky will return at 9:15 the following morning for a conversation on “The Evolution of Customer Loyalty,” which will feature a roundup of celebrity chefs: Sean Brock, who operates restaurants in Charleston, S.C., and Nashville; Top Chef head judge Tom Colicchio, who is based in New York; and Chicago-based Graham Elliot and Stephanie Izard.

Trade program festivities begin on Thursday, June 19, with a trade-only kickoff party at The Little Nell hotel from 2:30 p.m. to 4:30 p.m. The party will feature a premium hot dog cart serving items such as a Colorado Wagyu hot dog, a lobster hot dog and a classic corn dog, as well as a hot dog made with of duck, foie gras and Sauternes.

That upscale comfort food theme will also be highlighted with short rib Frito pie and cod brandade fish and chips with caper powder. Boozy ice pops in mojito-white chocolate and pomelo-margarita flavors will be on hand, along with blue cotton candy and a Kahlua-vanilla milkshake.