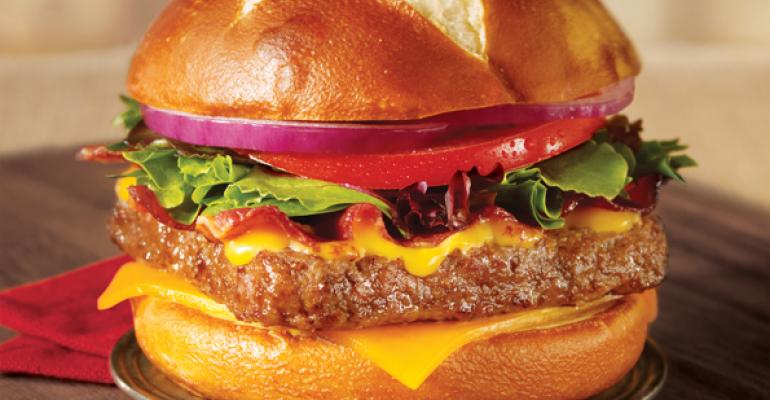 When to extend, end or reprise a popular LTO

Restaurant marketers and representatives from Wendy&rsquo;s and Checkers weigh in on how to handle successful limited-time offerings.

Restaurant marketer Charlie Hopper saw consumers recently express dismay when popular quick-service limited-time offers reached their end point and was reminded of the humorous country song, “How Can I Miss You When You Won’t Go Away?”

Resembling the character in the Dan Hicks song who refuses to let go of a relationship, noted Hopper, fans of Wendy’s discontinued Pretzel Bacon Cheeseburger or McDonald’s McRib, which has been scaled back to a regional LTO, took to Twitter and Facebook to lament the sandwiches’ passing.

But it is important that restaurants not end up like the country song’s protagonist, left with a product that has overstayed its welcome, so chains must develop strategies to maximize the popularity of a successful limited-time offer and to know when to end, extend, expand or reprise the item, he said.

“The temptation when you have something popular like the Pretzel Bacon Cheeseburger is to say, ‘People like it; let’s keep it,’ but how long will they keep liking it?” said Hopper, principal with Indianapolis-based agency Young & Laramore and author of the upcoming book, “Selling Eating: Restaurant Marketing Beyond the Word Delicious.”

The right balance between creating the devotion that results from the McRib’s famous scarcity and leveraging every last bit of sales and traffic momentum from a promotion’s run is hard to get, Hopper said, but can be worth it over the long term and the short term.

“Often there are LTOs worth extending, but they lose their specialness when you do that,” he said. “Only offering it for a limited time creates a demand later for the same thing or a similar version. Building the demand is the magic.”

Wendy’s Pretzel Bacon Cheeseburger arguably had the Dublin, Ohio-based chain’s best tenure for a limited-time sandwich in years, helping drive same-store sales of more than 3 percent in the third quarter for the company. Same-store sales for rivals McDonald’s and Burger King, and the quick-service segment as a whole, were largely flat during the same period.

A spokeswoman for Wendy’s public-relations firm noted in an email that the brand’s digital-marketing campaign for the sandwich, featuring Nick Lachey singing “Pretzel Love Songs” composed from fans’ tweets, resulted in more than 80 million social-media impressions during the burger’s July-to-November run.

The Pretzel Bacon Cheeseburger was originally a summer promotion, but it proved so popular that Wendy’s extended it through last month, ceding the airwaves to other limited-time offers like a repeat of Grilled Chicken Flatbread, the Pretzel Pub Chicken Sandwich and the latest offer, the Bacon Portabella Melt on Brioche. However, fans’ tweets turned distraught when advertising for the brioche sandwich signaled that Wendy’s was letting Pretzel Bacon Cheeseburger sunset, prompting Bloomberg Businessweek to run the headline, “Wendy’s Kills Its Popular Pretzel Bun — For Brioche?”

Brand spokesman Denny Lynch said the reaction to Wendy’s letting the clock run out on the Pretzel Bacon Cheeseburger overlooked the sandwich’s unprecedented run in terms of length and how much it overlapped with the promotional windows of other offerings.

He also noted that the sandwich and the chicken sandwich on a pretzel bun were more complicated than previously extended limited-time offers. “The Spicy Chicken Sandwich LTO did well [years before] and was extended, but that was on our regular bun with a different fillet, so it wasn’t that complicated,” Lynch said.

Oak Brook, Ill.-based McDonald’s decided to let its franchisees choose whether they want to offer the McRib this year instead of doing a national launch. The sandwich will share menu space with other recent introductions like the Southwest Premium McWrap, White Chocolate and Peppermint Mocha, and Pumpkin Spice Latte.

As in years past when the pork sandwich was a regional offer, McRib devotees can consult the fan-generated McRib locator to find the nearest market offering it.

Tim Nelson, president of Chicago-based agency Tris3ct, said rebuilding the McRib’s controlled scarcity would let McDonald’s use the sandwich as the bait to hook customers on the other items it has rolled out.

“Chains do LTOs in the first place to create urgency to drive traffic and recapture lapsed users,” he said. “You could get somebody in with a McRib who maybe hasn’t visited McDonald’s in three or four months. Would they see other items and break out of their patterns?”

Wendy’s spokesman Lynch would not comment on whether the brand was considering a replay of Pretzel Bacon Cheeseburger next year or whether the sandwich would return as a permanent item, which has happened at the chain before.

The Spicy Chicken Sandwich set that precedent for Wendy’s menu several years ago, gaining a spot on the permanent menu after selling so well as a temporary item. The Asiago Ranch Chicken Club followed the same path, Lynch said.

Deciding what to do, if anything, with the burger is “more art than science,” he added, as is taking consumer sentiment seen on social media into account. “The strategy of looking at higher-quality ingredients across the board remains a focus as we move forward,” Lynch said.

Young & Laramore’s Hopper advised brands to be cautious when considering a permanent spot on their menus for limited-time offers based on certain ingredients, such as a pretzel bun. What’s trendy today could look tired in only a few years, he said.

“It’s pretzels and sweet potato fries today, asiago yesterday, and who knows what tomorrow,” he said. “If brands come to depend on a fad and can’t give up the X percent of traffic it brings in, they can’t get rid of it even if it’s tired after a couple years. Then you have supply issues, because you’re throwing out brioche buns or whatever.”

But Nelson of Tris3ct countered that a promotional item graduating to the permanent menu can make sense if it consistently brings in a new customer base. “When Wendy’s moved the Spicy Chicken Sandwich to the permanent menu, it gave them the tool that spoke to a different audience, perhaps one that was more multicultural and definitely younger,” Nelson said.

Chains need to keep it all in balance, he stressed. Focus too much on limited-time offers, and it creates too much noise that limits the items’ effectiveness, Nelson added, but if there is not enough new-product news, wear-out with the core menu sets in.

The rise of the LTO platform

Perhaps the way to strike that equilibrium is to treat a popular limited-time offer as a platform for further innovation in later re-runs or expansions, the marketing experts said. They agreed that a new version of the Pub Burger Line at Culver’s and the Monsterella Sticks from the “Fry Love” menu at Checkers and Rally’s show that strategy.

Prairie du Sac, Wis.-based Culver’s reprised its Colby Jack Pub Burger this past April after the first run of the sandwich in late 2012 proved to be the chain’s most popular limited-time offer in its history, officials said in a statement. In late October, Culver’s came back with a new version, the Pepper Grinder Pub Burger.

Vice president of marketing David Stidham would not comment on the ongoing promotion of the Pepper Grinder Pub Burger but wrote in an email that the current offering “is becoming a very big deal.”

For Tampa, Fla.-based Checkers Drive-In, which operates and franchises the Checkers and Rally’s drive-thru brands, introducing new products to its “Fry Love” menu of side dishes has built not only average check through trade-ups from French fries, but also traffic through incremental visits at snack times.

Last year the brands had “enormous success” with a limited-time offering of potato skins made with Checkers’ “Famous Fry” batter, and this year they are following up with Monsterella Stix, which extend the flavored batter to mozzarella sticks, according to chief marketing officer Terri Snyder.

“We’re trying to be the first choice for folks who use fast food frequently, and that group is looking for change and newness,” Snyder said. “Other brands have so many LTOs that they’re not big, differentiated or unique. It’s not about number; it’s about power and crave-ability.”

“If you establish some authority in that product category, you can go in and out on that, and people will look there for what’s next,” Nelson said. Checkers likely would build loyalty with the core quick-service user that loves fried food, he added, and in Wendy’s case, perhaps the platform is upscale sandwich buns, which will get customers on the lookout for the next burger.

“The naming of these platforms becomes important, too,” Hopper said. “The repetition of ‘Pub Burger’ or ‘Fry Love’ ensures that, every time you bring the platform back, it’s a continuation for your operators and internal team. But when you go from potato skins to mozzarella sticks, to the consumer it just seems like the newest individual thing.”

Correction: Dec. 5, 2013  An earlier version of this article misspelled the agency that employs Charlie Hopper. It is Young & Laramore.