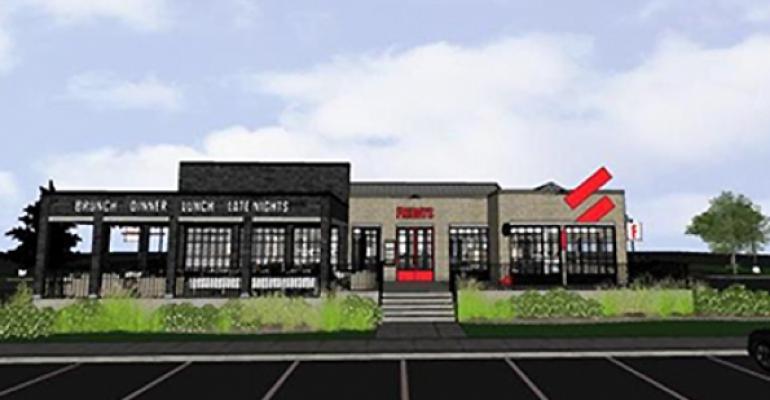 The reimaged restaurant, located in an area that skews high in Millennial customers, will offer mobile and reservations technology, multi-bar areas, expanded operating hours, grab-and-go offerings and a new area called Fridays Offsite to appeal to the coffee-shop crowd.

“It’s an ongoing innovation,” Robert Palleschi, who took the helm as TGI Fridays president and CEO in February, said in an interview Friday. “I like to say it’s a re-invention and, to a certain degree, a repositioning.”

The renovation of the 13-year-old, nearly 10,000-square-foot Corpus Christi location was aimed at creating “Fridays as a social place to be,” said Ricky Richardson, president of TGI Fridays USA, in an interview from the restaurant, which was originally converted from a China Coast restaurant.

“It’s going after occasions that are truly social at heart,” he said.

Some of the renovations and new daypart offerings include:

Fridays Offsite. “We’ve laid out this particular restaurant to amplify the bar space and create areas for mid-afternoon gatherings,” Richardson said. “We brought in great Wi-Fi, and we now have a deli case with grab-and-go sandwiches, salads, parfaits, cookies and brownies.” The areas are intended for customers who want to work or have offsite work meetings, with community tables that can be reserved and help the chain accommodate mid-afternoon occasions. “Customers can also just hang out if they want to do,” he said.

Multi-bar areas. TGI Fridays has added juice and coffee platforms to one of its bars, Richardson said. “We also have brought in a full coffee program for fresh-ground espressos, cappuccinos and lattes,” he said.

Extended hours. In a few weeks, the Corpus Christi restaurant will expand its hours to be open daily from 7 a.m. to 2 a.m., Richardson said. That’s about three to four hours of morning daypart and an additional hour of late-night daypart to accommodate guests, he said.

Hangover Brunch on Saturdays and Sundays. “We’re bringing new products out on the bar side, such as fresh-squeezed juices and non-alcoholic drinks,” Richardson said. New brunch-focused menu items include chicken and waffles, bourbon steak and eggs, and “Bears and Berries Waffles,” which feature malt waffles with bear-shaped graham crackers. “Weekend brunches are very social,” he said, adding that the program was tested in Farmingville, N.Y., and expanded to Corpus Christi. “We had phenomenal success,” he said.

The so-called “hang-out spaces” flank either side of the Corpus Christi restaurant’s main entry, Richardson explained, with an area for events on one side and a variety of community and other table heights on the other for the Fridays Offsite seating. The unit also includes garage doors that open to an expanded patio.

The Corpus Christi unit, which has 280 seats, was about 13 years old. “It was time for it to be refurbished and refreshed,” Richardson said. “We had that opportunity to really push the envelope not only from a design standpoint but some cool stuff with the bars and space layout.” The footprint is larger than a typical TGI Fridays unit, he said, and that ranges from 6,800 square feet to 7,400 square feet.

Richardson said over the past 13 years, the restaurant has maintained high guest counts, and it currently “over-indexes” with the Millennial segment, or those customers from 21 years old to their mid-30s.

The Fridays system overall draws about 45 percent of its customers from that age group, Richardson said, and “we’ve seen significant growth in that over the last 18 months.” At the Corpus Christi unit, Millennials make up “just north” of 50 percent of customers, he said.

Palleschi said the TGI Fridays brand historically “has always successfully innovated and created new ideas. But this is really more of a wholesale change — not only the look and feel of the exterior and interior, but it’s also a change with the review of the daypart and taking a fresh look at everything.”

Correction: March 7, 2016  This story has been updated to correct wording in a quote by Ricky Richardson about TGI Fridays’ brunch.