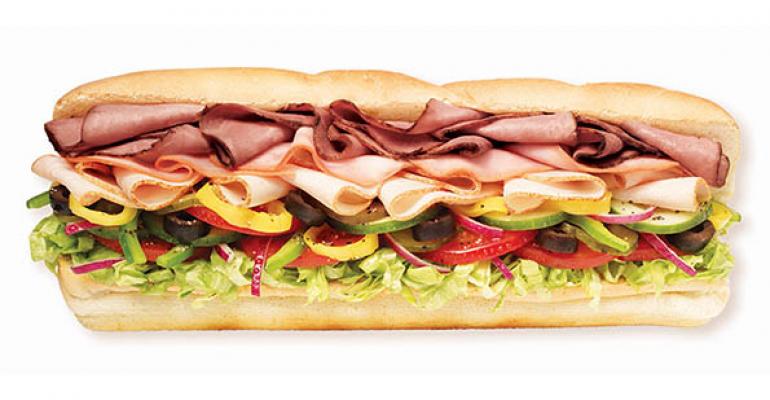 Subway to give away subs on National Sandwich Day

Subway will give away sandwiches next week as part of a major media campaign to mark National Sandwich Day.

The Milford, Conn.-based sandwich giant will offer a buy-one-get-one deal on Nov. 3. Customers who buy a six-inch or a Footlong sub, plus a 30-ounce drink, will receive a sandwich of equal or lesser value for free.

The company will introduce the promotion with an ad touting the campaign, "Buy One Give One," that will begin airing during primetime television Thursday evening. The ad encourages fans to give a sandwich to someone they love or to someone who needs it. The ad features a hidden camera with a woman outside a Subway giving away sandwiches.

The offer will also kick off what the chain calls a “Save Lunch Break” movement, with t-shirts, posters and other items, and a social media campaign using the hashtag #SaveLunchBreak — a campaign aimed at encouraging consumers to take more time at lunch.

“We discovered that people around the country are experiencing a ‘recess withdrawal’ and rarely taking lunch,” Lanette Kovachi, corporate dietician for Subway, said in a statement. “As a result, we saw the opportunity to champion a ‘fresh take’ on the lunch break and encourage our consumers to replenish their mind and body by taking a breather before the afternoon ahead.”

The campaign comes as the chain works to emerge from a summer in which former spokesman Jared Fogle agreed to plead guilty to charges involving child pornography and having sex with minors.

The issue has found itself in public again after a whistleblower appeared on the “Dr. Phil” program this week, with audio recordings in which Fogle discussed his interest in children in detail.

It also comes as the chain works to reignite sales after a sluggish two years. Subway’s unit volumes have fallen each of the past couple of years, and its once unstoppable U.S. growth has slowed. Starbucks Corp. leapfrogged Subway as the second-largest restaurant chain in the country last year, according to Nation’s Restaurant News Top 100 data.

Update: Oct. 30, 2015 This story was updated to include the name of the Subway campaign.