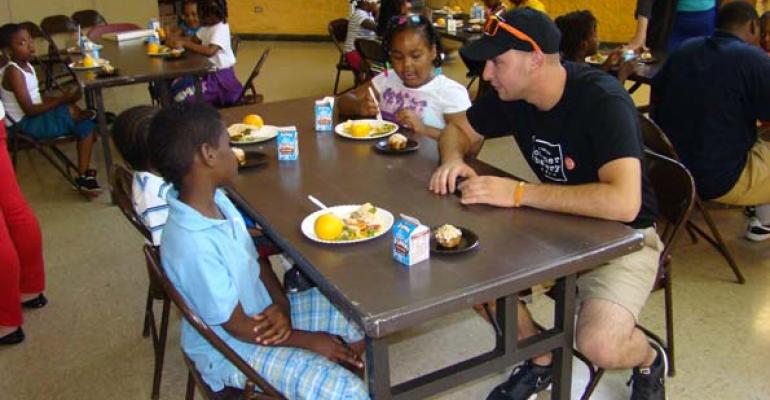 Restaurants spring into action for charity

The foodservice industry has burnished its reputation as a major philanthropic force over the decades, mobilizing its workers and its consumers to raise funds and awareness for dozens of societal challenges from hunger to chronic disease.

Several brands once again have lofty goals for fundraising this year and seek to build on record totals achieved in the past few years, leading to cumulative donations that number in the millions of dollars for charity.

While the full breadth of restaurants’ philanthropic activity would be too large to cover in full, several standout brands shared their cause marketing highlights from the past few months with Nation’s Restaurant News.

For more than a decade, Miami-based Sailormen Inc. has raised money for the Muscular Dystrophy Association. Its efforts this past spring surpassed last year’s record fundraising total, netting a donation of more than $703,000 for the MDA.

Sailormen is the largest domestic franchisee of Popeyes Louisiana Kitchen, operating 143 locations in seven Southeastern states. It raised $539,863, through the sale of $1 books of bounce-back coupons totaling $30 in discounts during its annual nine-week “Appetite for a Cure” drive. The total was an increase of more than 7 percent over Appetite for a Cure’s $503,000 donation in 2013.

Sailormen also hosted its 10th annual Popeyes Louisiana Kitchen Golf Classic event on May 8 in Miami Lakes, Fla. The golf outing, which was sponsored by more than 40 local companies, raised more than $163,000.

“I’m proud of Sailormen and Popeyes employees, customers and business partners who have offered their unyielding support for such a worthy cause,” Bob Berg, chief executive of Sailormen Inc. said, in a statement. “Because of their generosity and enthusiasm to give back through this year’s Appetite for a Cure program and the Golf Classic, MDA families throughout the Southeast will receive vital funds to help them fight back against muscle disease.”

Funds donated to the MDA support medical research and health care services provided to muscular-dystrophy patients at the MDA Clinic at the University of Miami School of Medicine, and part of Sailormen Inc.’s donation also pays for children to attend MDA Summer Camp in Lake Worth, Fla.

Since 2002, Sailormen has raised more than $4 million for the MDA.

Corner Bakery and Share Our Strength's No Kid Hungry

For Dallas-based Corner Bakery, involvement in Share Our Strength’s Dine Out for No Kid Hungry has been its core initiative for its cause marketing, and the fast-casual brand has donated more than $1.2 million to the childhood hunger charity to date.

Now through the end of the Dine Out campaign at participating restaurants in September, Corner Bakery will donate 10 cents to the charity from the sale of every frozen lemonade, Lemon Whoopee Pie and Blueberry Lemonade Baby Bundt dessert. But the 165-plus-unit bakery-café chain wanted to create even more awareness for this year’s No Kid Hungry partnership by adding local cause marketing events in the lead-up to Dine Out in September, chief marking officer Diana Hovey said.

The brand hosted teachers from Chicago Public Schools at its location on Michigan Avenue July 23 to take part in activities and fundraiser events like a pancake flipping contest, then transported those teachers on a “Crave Cruiser” bus wrapped in graphics for its BBLT sandwich to St. Agatha’s Academy, a site where school children can have meals provided to them in the summer.

“We asked ourselves what we could do to introduce [the fundraiser] in a big way, but also understand better how No Kid Hungry goes down to the grassroots level,” Hovey said, in an interview. “We invited school teachers from all over Chicago, because No Kid Hungry’s research shows that many teachers take money out of their own pockets to feed their kids at school, to help them become … great students. We thought having some fun with the teachers would be a great part of the introduction.”

Corner Bakery wanted to launch local-market events in the summer because, while many people know the benefits of providing breakfast in the classroom to food-insecure children, many are unaware of the problems facing those same children during the summer months when school is out, Hovey said.

“There’s a fraction of those programs during the summer, yet there is so much funding available, so this event is about letting local organizations know that No Kid Hungry can connect them to these resources,” she said.

Corner Bakery plans to hold a similar fundraising and service event with teachers in Washington, D.C., the last week in July.

Houston-based Joe’s Crab Shack also has partnered with Share Our Strength for No Kid Hungry since 2008, and its president, Jim Mazany, chaired the Dine Out for No Kid Hungry advisory board last year. Since its first Dine Out in 2008, Joe’s has raised more than $3.3 million for No Kid Hungry, including nearly $1.1 million last September.

The 135-plus unit brand, a division of Houston-based Ignite Restaurant Group, also raised an even bigger amount more recently with its #JoesGoesBlue campaign for autism research. Joe’s Crab Shack raised more than $1.3 million during the month of April for Autism Speaks, the world’s largest autism science and advocacy organization.

To recognize champions of the effort, Joe’s awarded the top 10 highest fundraising restaurants’ general managers with a trip to Chicago in May to participate in the 2014 Walk Now for Autism Speaks event.

“Our teams were passionate about finding ways to engage guests and raise money for a cause that is very near and dear to so many of us,” Mazany said, in a statement. “Thanks to their hard work, along with the support of our guests, we can donate more than a million dollars back to the people in our communities dedicated to solving the autism puzzle.”

Over the past three years, Joe’s Crab Shack has donated more than $5 million to support children’s causes and charities, the company said.

“We are grateful for the outstanding commitment Joe’s and its guests have shown the autism community, both locally and nationally,” Autism Speaks president Liz Feld said, in a statement. “The #JoesGoesBlue campaign brought awareness to new audiences. Joe’s fundraising efforts will further our investment in innovative research and our advocacy efforts for individuals and families affected by autism.”