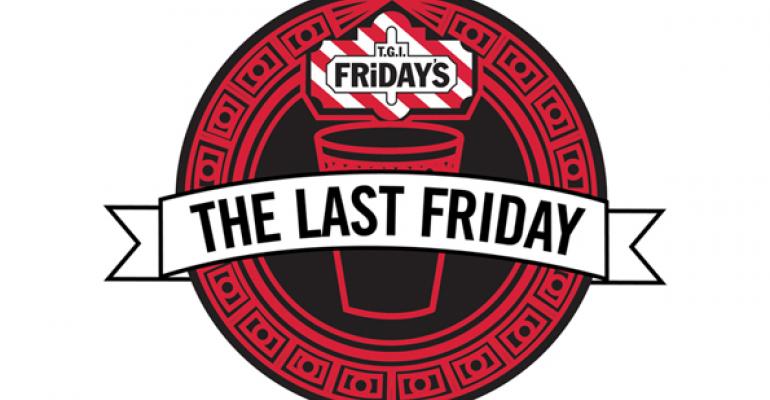 Facing the purported Dec. 21 Mayan Apocalypse head on, a number of dining and drinking establishments are enticing customers to eat and drink with them like there's no tomorrow.

Friday, Dec. 21, is the day that scientists regard as the end to the ancient Mayans’ 5,215-year Mesoamerican Long Count calendar cycle. While scholars have dismissed it as doomsday, restaurant chains such as T.G.I. Friday's and independents have found it a date to tap into, a way to ring in the end of the world.

"The idea that the world will end on Dec. 21, 2012, is a cultural phenomenon," explained Shannon Gewinner, vice president of brand marketing at Carrollton, Texas-based T.G.I. Friday's. "We've heard about it for years and now everyone wants to see if it will really happen."

Friday's is sponsoring Mayan-inspired "Last Friday" celebrations at restaurants in Chicago, Los Angeles, Miami and Washington, D.C., as well as units in the Florida cities of Orlando and Tampa. Local DJs will provide entertainment and bartenders will create Mayan Margaritas, the company said. Units elsewhere will offer music and happy hour specials.

Nick Shepherd, chief executive of T.G.I. Friday's parent Carlson Restaurants, said in a statement, "We don't know what is going to happen, so we might as well live it up and embrace that Friday feeling, even if it is just one last time."

Friday's has created a microwebsite, thelastfriday.com, with a countdown clock and information on the celebrations. The company also is offering an "End of the World Survival Kit" and other prizes at its Facebook page.

"For restaurants, this is a great opportunity to tap into a current event that so many people are captivated by," said Gewinner. "With Dec. 21 falling on a Friday, T.G.I. Friday's had to do something special." 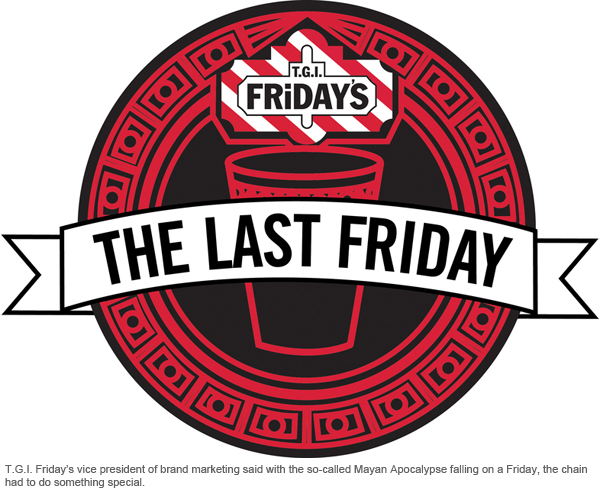 Ringo's Pub in Plano, Texas, is offering an "End of the World" party on Dec. 21 as well. "In the bar business, any excuse to throw a thunderous party is good," said Dave Rossetti, general manager of Ringo's, which he said "breaks the monotony for those that frequent the pub, and a chance to do something different and fun for them." 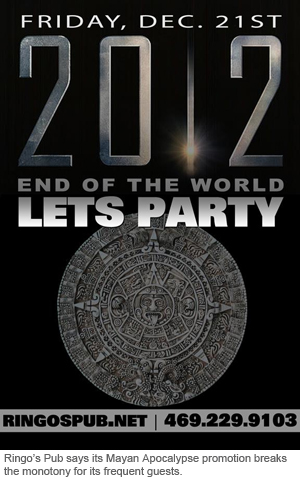 With the so-called Mayan Apocalypse falling on a Friday, a historically good night for pubs and restaurants, "End of World" promotions help a business stand out from all the other holiday celebrations, Rossetti added.

"One of our most popular beers is called La Fin du Monde, which means 'end of the world,'" Rossetti added. "They were the obvious choice to sponsor the party."

The 23-unit Margaritas Mexican Restaurant, based in Portsmouth, N.H., will be celebrating its “End of the World” a day early, on Thursday, Dec. 20. Events include an “Armageddon Jalapeno-Eating Contest” and a “Sitting Here in Limbo” limbo challenge. The chain is also offering a Facebook doomsday app.

Even more posh establishments are getting on the doomsday bandwagon. Poste Moderne Brasserie in Washington, D.C., will be offering "The Final Feast," a $180 multi-course dinner with wine pairings and menu ingredients like foie gras and caviar.

Some promotions are more highbrow than others. The Villa Restaurant in Wayland, Mass., emailed customers with a quote from Robert Frost's apocalyptic poem "Fire and Ice," a 15-percent-off coupon, and an offer of a pair of sunglasses to the first 500 customers. "Why?" the restaurant asked, and then answered: "Because according to Robert Frost, the world will end in fire, and we want you to be able to see that fireball clearly as it rolls over you. If it is ice, you will go out looking cool as ever in your new designer sunglasses."

And while some restaurants are looking at the Mayan Apocalypse as a day to aim pitches at customers, a Taco Bell in Fargo, N.D., has grabbed it as time to snag a few new employees.

The Fargo unit is advertising for new workers with a marquee sign that says: "Now hiring: December 21st survivors. All Mayans Welcome."