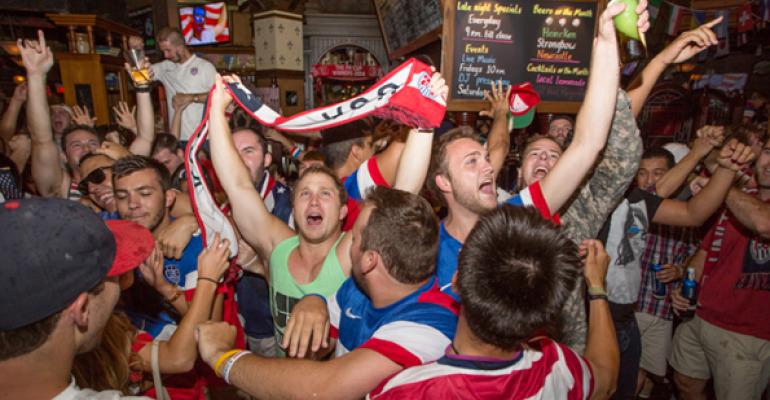 The World Cup may be a quadrennial curiosity for most casual sports fans in the United States, but the success of the U.S. National Soccer Team in this year’s tournament has assisted sports restaurants and soccer-friendly pubs with a significant spike in traffic, driven as much by patriotic pride as by beer and wings.

“I was in our Austin, Texas, location for the [United States versus] Portugal game, and when everybody in the pub sang the national anthem, you couldn’t have heard the person next to you, it was so loud,” said Eric Peterson, director of operations for Atlanta-based Fadó Irish Pubs. “It was intoxicating to say the least. That extra USA game is invaluable to us and means a ton of incremental business. We’re exceeding projections right now and want to see the U.S. go all the way to the final.”

The American squad exceeded most expectations for the 2014 World Cup by advancing from the group stage to the knockout round, which begins Tuesday with an afternoon game against Belgium. The team advanced with a win, a draw and a loss from the so-called “Group of Death,” which included the national soccer teams from Ghana, Portugal and Germany.

The United States’ 2-1 victory over Ghana on June 16 built excitement for matches against Portugal on June 22 and Germany on June 26, Peterson said, leading to sales and traffic above even Fadó’s high projections.

That scenario played out across the restaurant industry during the group stage of the World Cup. Pizza restaurants also reported a surge in orders placed during World Cup games.

Location is a major benefit to this year’s World Cup, as games are played throughout Brazil and are scheduled in time zones favorable to the U.S., as opposed to previous tournaments that took place in South Korea and other countries with an onerous time difference.

“In the past, it was tough to staff for World Cup games, so we’d have to look at matchups to see which teams might draw a crowd for an early-morning game,” Peterson said. “But the timing this year is perfect on Eastern Standard Time, and it’s accessible to a lot more people. The U.S. team has re-engaged a lot of casual soccer fans.”

Now at its 13 pubs in 12 cities, Fadó is expected to be at capacity before the game between the United States and Belgium Tuesday. Peterson said the restaurants will fill even sooner where they are the home of local chapters of the American Outlaws, the club of supports for the U.S. National Soccer Team.

Atlanta-based Hooters reported similar increases in sales and traffic during World Cup games, especially for the American team but also for teams from other countries like Brazil, Colombia and the Netherlands, said vice president of marketing Andrew Pudduck.

The boost from the World Cup played out across all of Hooters 345 units in 42 states, not just in soccer-crazy markets like Seattle or Washington, D.C., Pudduck said.

“You’d think there would be regional trends, but there were no true differences,” he said. “Everywhere was packed, and we’re excited about that because it means soccer is gaining traction everywhere. There are no more fans coming out of the woodwork; it’s like they’re everywhere now, and they love to have a terrific time.”

Even when the United States let a one-goal lead evaporate in the last minute against Portugal, settling for a disappointing tie, the energy stayed up in the dining rooms, he said. Surprisingly, alcohol sales did not accelerate, as most fans elected to head home rather than drown their sorrows.

“That was a huge bummer for so many people,” Pudduck said of the U.S. team’s last-second tie with Portugal. “Because that happened in a game on Sunday, we didn’t see an increase or decrease in beer sales; it just stayed steady. If that had happened on Friday or Saturday, we might’ve seen a bump in the number of people who kept drinking.”

Nonetheless, Hooters and other restaurant chains have stepped up their marketing in-store and on social media to capitalize on growing World Cup fever.

“We’ve been really impressed by USA Soccer’s social presence, and we’re trying to feed off it and accentuate it,” Pudduck said.

Peterson of Fadó concurred that the U.S. Soccer Federation’s social media presence, especially on Twitter, has been a robust platform to which the sports pub chain can attach itself. He added that ESPN has made this year’s tournament the most heavily publicized and promoted World Cup he could ever remember.

But the most important marketing program for Fadó is the chain’s “2014 Cup Brackets Challenge,” which offers prizes for people who fill out tournament brackets on Facebook, similar to promotions for the NCAA basketball tournament, and is offering a $1 million prize for a perfect bracket that correctly picks all 64 games.

“The bracket-style contest was more user-friendly, and we did a lot of data collection around it,” Peterson said. “We’re running the contest to own the soccer position in every market, and we’re putting our money where our mouth is.”