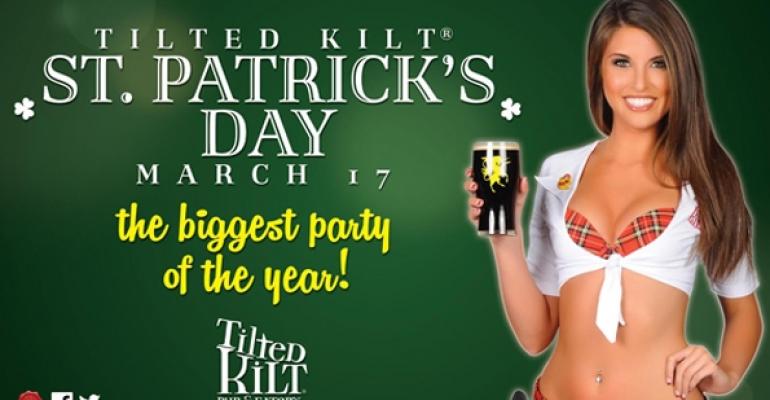 The phrase “March Madness” typically evokes the traffic-driving benefits of the NCAA basketball tournament for most restaurants, but this year the month is aligning several calendar shifts that have many brands — not just the usual players — anticipating a continuous benefit from college basketball and St. Patrick’s Day.

Unlike last year, when Easter fell during the second weekend of the NCAA tournament and stole traffic from “Sweet 16” and “Elite 8” round games, March Madness does not have any other major event overlapping with its game days. Namely, St. Patrick’s Day is beneficially situated on Monday, after the tournament’s field of 68 teams is seeded but before Tuesday’s first-round games are televised.

Even a concept like fast-casual pizza chain Your Pie, which is neither an Irish pub nor a sports bar, is looking forward to the collective momentum of St. Patrick’s Day and March Madness, both which follow its biggest promotion of the year this Friday, “Pie Day” — when the date 3/14 is a play on the mathematical constant pi, or 3.14.

Drew French, founder of Athens, Ga.-based Your Pie, is looking forward to going straight from the daylong giveaways of Pie Day into the NCAA tournament’s Selection Sunday event this weekend, and on to St. Patrick’s Day, all while the weather starts to warm up.

“It’s a perfect storm for us, and I’m sure other restaurants feel that too,” French said. “People are getting their tax returns back, they’re tired of being inside, and it’s all culminating with St. Patrick’s Day and March Madness. … We’re hopefully converting first-time customers into loyal customers, and that’s why we’re putting all our marketing pieces in place.”

For some brands, St. Patrick’s Day is the optimal marketing event of the year, regardless of when it falls.

Bennigan’s, which carries the slogan “Where every day is St. Paddy’s Day,” got started even earlier to capitalize on the holiday’s appeal, running its “Get Lucky with Bennigan’s” promotion since March 4. The Dallas-based casual-dining brand is offering a trip to Europe as the grand prize, as well as free food and drinks, to guests who dine in at Bennigan’s to receive a scratch-off card or who download the brand’s “Get Lucky” mobile app.

Another pub-themed chain, Tilted Kilt, anticipates a big St. Patrick’s Day owing to the holiday’s placement on Monday, where it will not steal any traffic associated with weekend business or college basketball.

“Weekdays for St. Patrick’s Day are ideal, because people want to cut out of work for lunch or stay late,” said Kristin Cronhardt, vice president of marketing for Tilted Kilt. “We’re going to have a good weekend, then St. Patrick’s Day leading right into March Madness. We’re starting a new ‘Hoppy Hour’ menu on Tuesday the 18th, throwing something right in the middle of the week to capitalize on the crazy busyness of St. Patrick’s Day weekend.”

Even when St. Patrick’s Day fell on a Sunday last year, traffic on that Sunday increased nearly 13 percent systemwide for Buffalo Wings & Rings, director of marketing Charlie Francus said. This year, the Cincinnati-based casual-dining brand is anticipating an even better sales day with the holiday’s placement on the calendar, he added.

Momentum for the Madness

However, since Buffalo Wings & Rings is not a pub-themed chain that often builds its marketing around St. Patrick’s Day, the brand is promoting against college basketball more intently and is pleased that a beneficial placement for the 17th would carry the chain’s momentum between basketball days.

“We’re expecting to do great throughout the tournament, and St. Patrick’s Day being there at the beginning is going to help a lot,” Francus said.

Last year, March Madness was a robust sales booster for Buffalo Wings & Rings, particularly during the first weekend when all 68 teams play and many of the games are televised at lunch time on Thursday and Friday, Francus said. He added that sales increased 12.1 percent the first week of the 2013 tournament, compared with the typical operating week that occurred at the start of March 2013. The lunch daypart led that increase with a 17.6-percent gain.

“The spike in traffic is strongest in the beginning, because some of those first games aren’t televised fully, and you need a special TV package like ours to see all of them,” Francus said. “The pop in lunch traffic for that first weekend is especially great, but then when teams get knocked out, interest wanes.”

Buffalo Wings & Rings will attempt to maintain that interest — and more importantly drive repeat traffic — with its March Madness Pick ’Em promotion, which invites guests to register at the brand’s microsite to pick winners of basketball games for prizes like free food and drinks, plus a 70-inch TV to the grand-prize winner. Fans are asked to participate each weekend, rather than just at the beginning of the tournament.

“Everybody does a bracket, but if you make all your picks only at the beginning, it’s shot if your teams lose,” Francus said. “Here, our customers pick round by round, digitally via email. … By providing that service to have fun with friends, we hope they keep coming back in.”

The Tilted Kilt and Hooters have similar multiweek bracket challenges. Hooters will change up its systemwide offers each weekend of March Madness to spur repeat traffic for its guests, escalating from free Buffalo chicken dip this weekend to free fried pickles next weekend, to a buy-10-get-10 wing offer during Sweet 16 weekend.

“The nature of the beast with the NCAA tournament is that even though your team is out or your bracket is busted, the interest is still high,” Andrew Pudduck, vice president of marketing for Atlanta-based Hooters said. “We’re dealing with a good product. That’s why we’re doing multiple offers, good for various weekends that progress through the tournament.”

The casual-dining chain’s March Madness programming is centralized on its “Hooters Hooky” microsite, where fans can register their information with their local Hooters location, download coupons for the offers and print out humorous “doctor’s notes” excusing them from work so they can play hooky and watch basketball at Hooters.

The brand also will sponsor ESPN’s Tournament Challenge, on both the desktop and mobile sites. Hooters has stepped up its annual March Madness promotion by offering a VIP trip to the Final Four in Dallas this year, for which guests can qualify by uploading photos of themselves with Hooters Girls in their local restaurant and supplying the hashtag #HootersHooky.

Like other brands, Hooters will fortify its staffing and marketing spending during the next few weeks to capitalize on March’s packed marketing calendar, he said.

“March is when we show people what we’ve been training for all season,” Pudduck said.