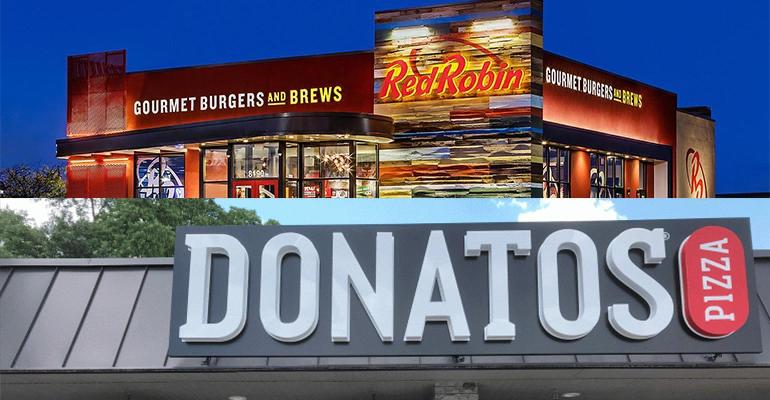 G.J. Hart said Donatos will roll out to Red Robin restaurants systemwide, but it won't likely happen this year.
Marketing

Red Robin CEO G.J. Hart said the Donatos partnership has been successful, but the company will focus on Red Robin’s comeback this year.

Red Robin added Donatos’ pizza to its menus at a few dozen restaurants in 2018, generating incremental sales while also ensuring the brand operated autonomously on third-party marketplaces. Donatos essentially functioned as a virtual restaurant out of Red Robin locations well before the pandemic put such concepts on the map.

The partnership was such a success, Red Robin added another 120 restaurants to the mix, bringing the total to more than 200 locations throughout the gourmet burger brand’s system in 2021. Six months ago, then-CEO Paul Murphy noted that the Donatos pizza product “continued to exceed expectations,” adding that the company was “particularly encouraged by the incremental sales” generated through the partnership. Murphy said Donatos pizza generated approximately $6.2 million in sales during the second quarter, with a mix of about 60% dine-in and 40% off-premises.

Related: How Red Robin is positioning itself for a comeback

“Restaurants serving Donatos outperformed restaurants without Donatos by 8.4 percentage points in terms of comparable restaurant revenues versus 2019 in the second quarter,” Murphy said during Red Robin’s Q2 call. “Additionally, guest checks that include Donatos pizza are on average $10 higher than those that do not.”

Shortly after that call, G.J. Hart was named president and CEO of Red Robin and, though he noted there is indeed plenty to like about the Donatos partnership, his priorities have shifted squarely to the implementation of an extensive turnaround plan for the flagship brand. Hart laid out that plan earlier this week during the ICR Conference in Orlando, including five focus areas like elevating the guest experience and transforming into an operations-focused company.

Because of that focus shift, a further Donatos rollout has been put on hold for now. On Murphy’s watch, the plan was to add Donatos to the remaining 150 Red Robin restaurants throughout 2023. Now, it’ll “probably be into 2024,” Hart said.

“We will move it into all of the system, but we are taking a little bit of a step back so we can invest back in our current assets. After all, the flagship is Red Robin, so we need to do a first thing’s first. We do plan to roll it out to the rest of the system, we just don’t have the exact timeframe,” he said.

Delay aside, Red Robin remains bullish on the partnership. Hart said Donatos is “an incredibly good product that we have had great success with,” adding that restaurants that serve Donatos are close to achieving a double-digit revenue gap versus those that do not.

“It gives us an additional offering. Candidly, from a positioning perspective, we think about Red Robin and its offerings and it’s true Americana,” he said, adding that it complements pizza, which is also an "iconic American" staple. “It’s been a seamless execution. We do think it has merit and we will roll it out to the rest of the system.”