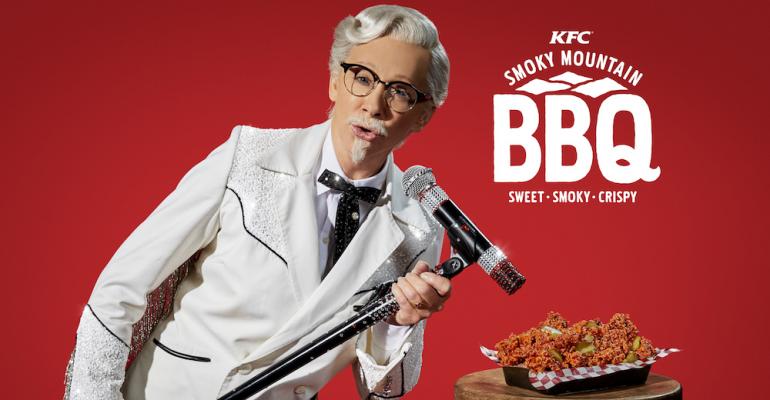 Reba McEntire to be KFC’s next Colonel

Ads featuring McEntire will premiere on Jan. 28, one day before the chicken flavor becomes available nationwide.

“We are absolutely thrilled — I’m personally thrilled, I have to say — that Reba McEntire will be our next colonel,” Andrea Zahumensky, chief marketing officer for KFC U.S., told NRN.

“Reba is a brand fan,” she added. “She grew up eating KFC and she demonstrated to us and said to us that she was really excited to play this role.”

Women have played an increasing role in pop culture recently. A 2016 reboot of the comedy classic Ghostbusters featured women in the title roles, and the comic book-based hit of last summer was Wonder Woman. Additionally, in this season of the British science fiction series Dr. Who, the Doctor is played by a woman.

But Zahumensky said the selection of McEntire was a natural extension of the role of the colonel, who since 2015 has been played by many actors, including Darrel Hammond, Norm Macdonald, George Hamilton, Vincent Kartheiser, Billy Zane, Rob Lowe, Ray Liotta and, most recently, the largely unknown actor Christopher Boyer (he was ostensibly picked to save money so KFC could pass the savings on to customers with its $5 Fill Up and discounted $3.99 pot pie).

“We’ve maintained for quite some time that really anyone who embodies the spirit of the Colonel qualifies to play this iconic role,” Zahumensky said. “This really is about finding the perfect fit for KFC and the Colonel and our Smoky Mountain BBQ.”

McEntire is a Grammy Award winning and popular entertainer, and Zahumensky said she expected the new flavor to be the chain’s “most broadly appealing flavor.”

The introduction of the latest flavor comes a year after the launch of Georgia Gold, coated in a tangy mustard sauce. That was preceded a year earlier by the spicy Nashville Hot chicken.

All three flavors are currently on the menu at KFCs across the country.

“Consumers seemed to really enjoy that flavor,” she said.

Based in Louisville, Ky., KFC is a subsidiary of Yum! Brands, Inc., and has more than 20,500 locations in 125 countries and territories, including more than 4,100 units in the United States.