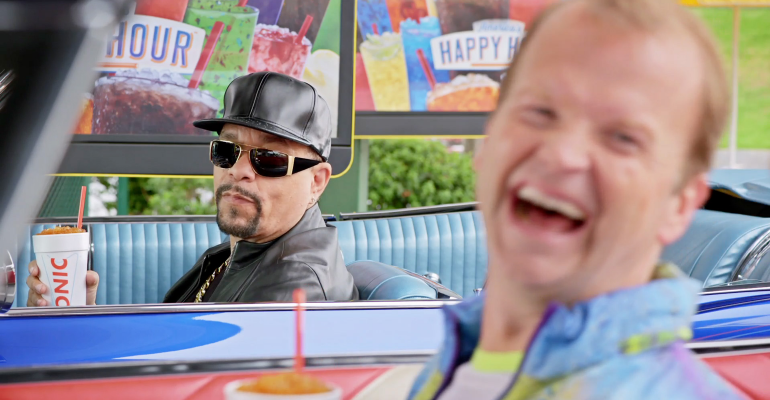 Sonic Inc. has tapped Ice-T to promote its frozen teas this summer, featuring the rapper and actor in television ad cameos and as a thawing centerpiece to a live Facebook contest on Tuesday.

To highlight the tea offerings on social media and amplify Ice-T’s TV spot cameo, the Oklahoma City-based drive-in chain will host a Facebook Live event, starting at 1 p.m. CDT on Tuesday, that features a thawing life-size ice sculpture of the celebrity.

When the melting Ice-T sculpture drops its microphone, the first 100 users to comment on the live stream in Sonic’s Facebook page will receive a limited-edition, cold-activated t-shirt.

“The addition of Ice-T to our ‘Two Guys Frozen Sweet Tea’ spot was the perfect combination to showcase an incredible drink with a winking sense of humor, especially during National Iced Tea Month,” said Burke Morley, Sonic’s senior director of brand content, in a statement.

The frozen ice teas can be customized, a Sonic representative said, and new flavors include Wildberry and black cherry. They can also be mixed with half lemonade for what Sonic has named a “Frozen Clubhouse.”

Margaret Johnson, chief creative officer at Goodby Silverstein & Partners, Sonic’s creative agency and the leader on the Facebook Live event, said the contest  “demonstrates a new way to think of a drink that’s been around for over 100 years, and we can’t imagine a better spokesperson for it than Ice-T.” With the frozen tea platform, Sonic said it has a drink menu that offers more than

1.3 million flavor combinations. The offerings are available at half price 2 p.m. to 4 p.m., as part of Sonic’s happy hour.

Sonic has more than 3,500 units nationwide.