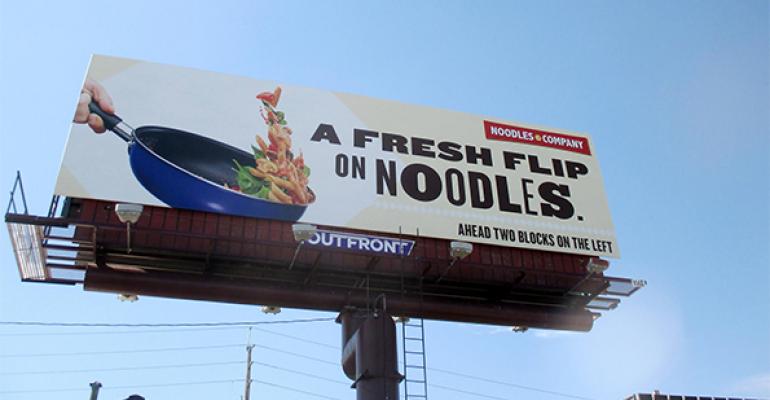 Noodles & Company has removed artificial ingredients from its core menu and introduced a new brand platform that highlights its focus on “real food,” the company said Monday.

The Broomfield, Colo.-based fast-casual chain has pledged that artificial colors, flavors, preservatives and sweeteners have been removed from its core menu, including noodles, sauces, soups, condiments, breads and dressings. The platform is supported by a marketing campaign centered around the phrase “Made. Different — Real Food, Real Cooking, Real Flavors.”

Additionally, the company said that by 2017, all meat and poultry served will come from animals that have never been given antibiotics or hormones.

That’s already true of Noodles & Company’s pork. This month, bacon will also be antibiotic free, with steak and meatballs to make that claim by mid to late 2016. Last will be antibiotic-free chicken, already in test in Colorado units, which will roll out by early 2017, said Mark Mears, Noodles & Company executive vice president and chief marketing officer.

By November, all restaurants will use a hormone-free Cheddar Jack cheese, and Noodles & Company will test a hormone-free cheese sauce for its macaroni and cheese in Colorado in the fourth quarter.

But there’s still work to be done in shifting to cleaner ingredients, Mears said.

The company is working with suppliers to remove artificial ingredients from the dessert menu, including the house-made Rice Crispy treats, as well as beverages, he said.

Mears said the chain has spent months reworking its recipes and ingredients, and some changes were necessary. Instead of serving Saltine crackers with soup, for example, the chain has shifted to a new petite baguette made without artificial ingredients.

“We’ve been researching this for almost a year. We wanted to make sure we did it right and that our brand position was rock solid,” he said. “It’s not a campaign or slogan. This is, indeed, a platform for everything we do moving forward.”

Kevin Reddy, Noodles & Company chairman and CEO, said the campaign is designed to “tell the story about our real food, real ingredients, and the fact that we have flavors from around the world in a much more purposeful and specific way.”

The chain has long been known for freshness, with about 14 vegetables prepped in house and made-to-order pastas. But Reddy said the brand needed to better communicate the quality of ingredients.

A key target audience for Noodles & Company is the demographic that includes Millennial parents, Reddy said.

“One of our real strengths is with groups and families, particularly Millennial parents,” he said. “That’s a group that really wants diverse flavors and tastes. Our menu meets their needs, and they tend to be more adventurous in what they feed their children.”

Last week, the chain rolled out new customizable kids’ meals, priced at $5. For a year, proceeds from kids’ meal orders will benefit the nonprofit organization No Kid Hungry, with the goal of providing 1 million meals to children in need.

The new ad campaign will also attempt to convey the brand’s internal commitment to “nourish and inspire” every guest, team member and community served, Mears said.

The “real food” message has been increasingly promoted by restaurant chains recently, led by brands like Chipotle Mexican Grill and Panera Bread.

Along with clean ingredients, the marketing message portrays Noodles & Company restaurants as a place to reconnect as a family.

“We believe life happens over a bowl of noodles,” Mears said. “With so many people distracted by various devices, we want to bring families back together over a meal.”

Video ads will appear in movie theaters, as well as digital pre-roll and on social media — but not yet television — in four markets, including Denver, Colorado Springs, Colo., Washington, D.C., and Madison, Wis., Mears said, though it will likely be expanded to other markets as the company collects feedback.

The campaign will also include radio, billboards and other outdoor advertising, as well as a direct mail drop in November. A microsite, to launch Tuesday, will also give more information about specific ingredients.

Mears said the real-food focus is not expected to impact menu prices, though the test of antibiotic-free chicken in Colorado did require about a 20-cent increase in pricing because it’s a higher-cost product.

“We passed a portion of that on to guests, but it was a nominal amount,” he said.

Noodles & Company’s marketing campaign is tied to its 20th anniversary celebration and National Noodle Day on Tuesday. But it also comes as the 486-unit chain attempts to reignite sales and traffic, which have been stalled in recent months.

For the second quarter ended June 30, Noodles & Company’s same-store sales were flat systemwide, increasing 0.1 percent at company-owned locations but decreasing 0.5 percent at franchised units. For the year, same-store sales guidance was downgraded to flat to a low-single-digit increase.