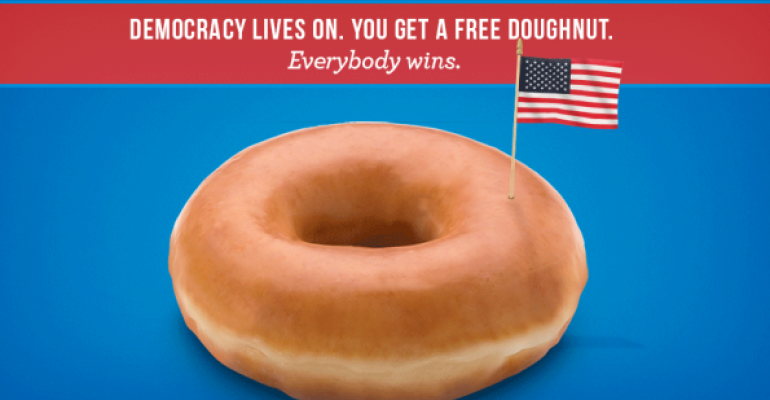 See which chains boosted traffic with promotions on Nov. 8

Operators electing to offer one-shot promotions might consider early returns from what a few restaurant chains did on Nov. 8.

Sense360 analyzes more than 150 million consumer trips a month via location and sensor-technology on more than 2 million devices in the United States.

Portnoy said the company analyzed more than 150,000 quick-service restaurant visits on Election Day and found traffic increases due to promotions at:

• Krispy Kreme, which offered voters a free donut. That provided the Winston-Salem, N.C.-based operator a 133-percent jump in market share compared with an average Tuesday.

• Starbucks, which offered a free tall coffee. The Seattle-based coffeehouse operator saw a 7.9-percent lift in market share compared with an average Tuesday.

• Chick-fil-A, which offered a free chicken sandwich at a number of its 1,400 locations. The Atlanta-based operator had a 7.8-percent lift in market share compared with an average Tuesday.

Less successful at driving visits, according to Sense360’s data, were:

• White Castle, which offered a free gallon of iced tea with the purchase of a Crave Case of 30 Original Sliders. “This did nothing, as they actually had a lower market share on Election Day than they average on Tuesday,” Portnoy said of the Columbus, Ohio-based quick-service operator.

“It does look like there was a slight decline in QSR traffic on Nov. 8, but I can't say for sure just yet until we get in the last trickles of data,” Portnoy said Friday. “The rest of the analysis is on a relative basis or looking at market share, so we have enough data to conclusively present that.”