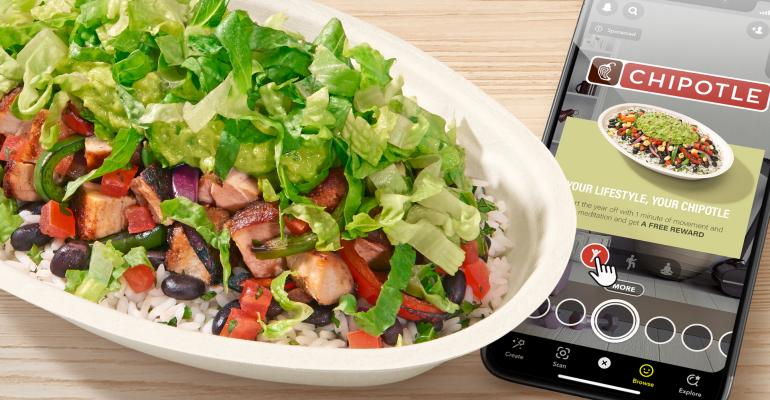 Chipotle and Snapchat partnered for a New Year's resolution-themed campaign, prompting users to move or mediate with "Chipotle-inspired" prompts.
Marketing

Chipotle strives to be an early mover on social media platforms like BeReal to resonate with Gen Z consumers.

Photo-sharing social media app BeReal launched three years ago and started picking up real traction in the U.S. just a few months ago. Its relative newness means most brands haven’t yet figured out their place on the platform, though some have started trying.

Chipotle is one such brand. In October, the company leveraged BeReal as part of its signature Boorito promotion, giving customers the chance to win free burritos if they posted a BeReal photo in costume at a restaurant. Notably, BeReal doesn’t allow advertising, so Chipotle’s campaign on the app was completely organic, which may tamp down the brand’s otherwise massive metrics. Most of the chain’s other social media channels – including Twitter, Facebook, Instagram and TikTok – have well over 1 million followers (Facebook has nearly 3.4 million).

Still, it was important for the brand to be there to test the waters on a channel experiencing meteoric growth and one that has especially found favor among coveted younger consumers. There are now over 73 million installations of the BeReal app, an estimated 1,000% increase year-over-year.

“We saw incredible potential with being an early mover on BeReal and tapping into the Gen Z audience,” said Candice Beck, Chipotle’s director of social, influencer and Web3. “We aim to meet our fans where they are.”

That said, social media is a swiftly moving environment with preferences changing alongside algorithms. For a Gen Z-favorite brand like Chipotle (according to Piper Sandler’s semi-annual Gen Z survey), that means it can be hard to keep up. Beck said the chain has introduced new channels and prioritized various platforms over others based on constantly changing results. The key to finding solid ground is simple immersion.

“Being immersed in each platform is critical to delivering a successful activation that resonates,” Beck said. “Depending on the campaign’s objective, we may choose to activate on specific channels where we can provide the most value to that audience. We may also utilize social listening to understand the conversation and tone on each platform in real time and post all content natively versus scheduling through a tool so that we have full control and can tweak to quickly match any cultural shifts.”

Cultural shifts happen on a dime in social and Chipotle has capitalized. On TikTok and Instagram, for instance, the company partnered with Tariq, a boy who went viral for his love of corn, as part of a broader social media campaign. The video featuring Tariq became Chipotle’s highest-performing Instagram post of all time, and its top organic TikTok video of all time. Reflecting Gen Z preferences and macrotrends in general (TikTok has more than 1 billion monthly active users), Beck said TikTok has the biggest scale for the brand “by far,” and that includes through organic reach and engagement metrics. The company, however, creates different content based on what's suitable for each of its channels. For example, Chipotle most recently jumped on the perennial trend of New Year’s resolutions, launching a lineup of Lifestyles Bowls supported by a Snapchat Lens that encourages users to exercise and mediate through “Chipotle-inspired” prompts.

“Sticking to New Year’s resolutions is tough, so we partnered with Snapchat to create an immersive, gamified AR Lens that motivates our fans to move and meditate wherever they are,” Beck said. “We love to supercharge our superfans with uniquely Chipotle experiences that deliver real value.”

How does it measure such value? Beck said impressions and engagement are the key metrics for the brand. Also, shares.

“We highly value shares, understanding that for a share, the content resonated with someone so much so that they told another person about it,” Beck said.

Of course, the company also evaluates redemption rates on promo codes, sales, and earned media impressions with an objective of “culture hunting,” as Beck calls it: “Our team is immersed in social culture, and it enables us to activate authentically and quickly on each platform.”