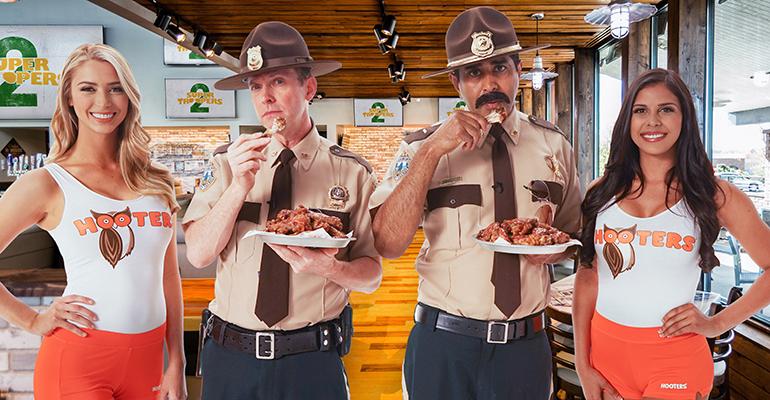 Hooters gets saucy with Snozzberries

Celebrants of 4/20 and fans of the 2002 cult movie “Super Troopers” will find that their worlds converge on Friday, when Hooters offers a limited release of Snozzberry Sauce for its chicken wings.

The fictional Snozzberries, which trace their roots to the lickable wallpaper in the 1971 classic “Willy Wonka & the Chocolate Factory” and the 1964 book on which the musical was based, were featured in a short but memorable squad car scene in the original “Super Troopers.” The sequel to the police-officer comedy will be released on Friday.

“It’s a cult classic,” said Carl Sweat, chief marketing officer at Atlanta-based Hooters of America LLC, in an interview. “Our agency was looking for ideas that would set us apart from all the noise out there, and after some legwork with the movie studio, we got snozzberries.”

While Sweat cited the movie’s admonition that “snozzberries taste like snozzberries,” he said Gregg Brickman, Hooters’ director of product development, came up with a sauce that has “berry notes” that go well with the brand’s smoked chicken wings.

And for customers too paranoid to leave the safety of their homes on Friday, Hooters is also partnering with third-party service DoorDash to deliver the wings and sauce for free.

“Our food-to-go sales are growing tremendously,” Sweat said. “We’re seeing good traction. In partnering with DoorDash, anyone who orders wings with Snozzberry Sauce will not only get free delivery but some gift packs to surprise them — movie posters, T-shirts, things of that nature, maybe even a fake moustache.”

The genesis of the Snozzberry Sauce promotion started late last year with Hooters’ advertising agency, with many of its creative employees fans of the original “Super Troopers.” With the sequel set to be released on April 20, the agency tracked down the movie studio and planned the Snozzberry promotion, Sweat said.

“We’re always looking for opportunities like this from a promotional and public relations perspective,” he said. “We’re looking to bring to life the idea of our slogan, ‘Hooters Makes You Happy.’”

And lapsed and infrequent users are a target as well.

“We want to connect especially with those who aren’t coming into the restaurant as frequently as others,” he said.

Hooters was aware of other sauce promotions that have gone awry, Sweat said, such as the ill-fated McDonald’s Szechuan Sauce offer in October that was linked to the “Rick and Morty” cartoon.

In February, Oak Brook, Ill.-based McDonald’s made a second run at promoting its once elusive Szechuan Sauce, increasing production 5,000 percent to avoid the long lines of disappointed customers it experienced in October.

Hooters had produced enough Snozzberry Sauce to make it through 4/20, a traditional weed-based holiday, and beyond, Sweat said.

The promotion was strategically positioned not with 4/20, he said, but to highlight Hooters’ variety of sauce flavors.

“Generally, from a national standpoint, we offer 17 sauces and three dry rubs. Some individual locations have a few more or a few less,” he said.

Snozzberry Sauce will be available at participating restaurant locations across the U.S. and Canada, which fits into the “Super Troopers” sequel’s plot line of an international border dispute. For additional details, visit hooters.com/supertroopers.

Hooters of America owns, operates and franchises more than 425 Hooters restaurants in 39 states and 31 countries.