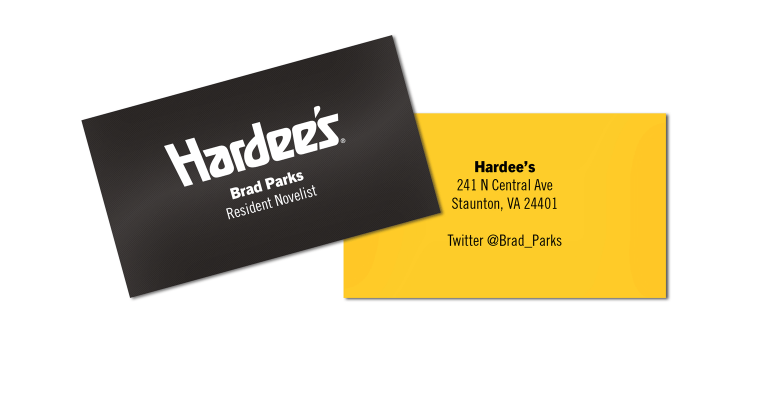 For some writers, it’s a room of one’s own. For others, it’s a fast-food restaurant booth.

Last week, a story about crime fiction author Brad Parks’ affinity for working at his local Hardee’s was published in the News Leader of Staunton, Va. Parks has haunted a Hardee’s in Staunton for the past year and a half while he wrote his latest book, “Closer Than You Know,” and in the process developed a bond with the staff. Employees and customers have even served as inspiration for some of his characters.

Although Parks admitted to the newspaper that Hardee’s was an odd choice for writing, the locale seems to be working for him. This is the eighth book he’s completed at one of the chain’s restaurants. Before moving, he previously wrote at another local Hardee’s location. “Hardee’s was really the writing sanctuary,” he told the News Leader.

For Hardee’s parent company CKE Restaurants Holdings Inc., it seemed like a perfect opportunity to go “big for one of their biggest fans.”

“We love hearing about customers doing extraordinary things,” a CKE spokesperson told Nation’s Restaurant News. “We nearly fell out of our chairs reading Brad’s story and knew right away we had to do something special for him.”

On the occasion of Parks’ latest book release Tuesday, the company placed a full-page ad in the News Leader. The ad was created by Havas, CKE’s new creative agency partner. The company also plans to gift the author business cards with the title “resident novelist,” and displayed a lifetime achievement plaque at Parks’ usual booth at the Staunton Hardee’s.

Never one to miss an opportunity for a quirky social media play, Hardee’s is urging its Twitter followers to buy Parks’ book and help make it a bestseller using the hashtag #BestsellerBrad.

Oh I'm sorry you haven't pre-ordered your copy of Closer Than You Know by @Brad_Parks yet? Gonna need you to get on that so we can make Brad a bestseller: https://t.co/frATNjgFk7 #BestsellerBrad