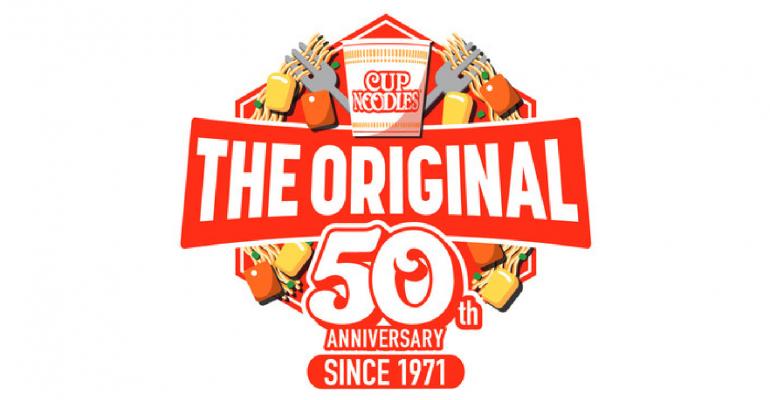 Cup Noodles wants innovators, entrepreneurs, cooks, and community leaders to use their noodles to come up with original food concepts, products, gadgets, ideas or unexpected flavors that could rock the food industry.
Marketing

The iconic brand calls on fans and foodies to use their noodle for a chance to be awarded $50,000 to help make their bold food idea a reality

Today, Nissin Foods, the inventor of Cup Noodles, celebrates its 50th anniversary by calling on all budding culinary minds to submit original ideas for the "Use Your Noodle" innovation contest, which acknowledges the creative, unconventional possibilities in the food industry starting on Sept. 18 - the brand's birthday. Submissions will be judged based on creativity, originality, and quality by acclaimed teen chef and social media talent Eitan Bernath and Nissin Foods President and CEO Michael J. Price.

Just like Nissin's founder Momofuku Ando, the inventor of instant ramen, Cup Noodles wants innovators, entrepreneurs, cooks, and community leaders to use their noodles to come up with original food concepts, products, gadgets, ideas or unexpected flavors that could rock the food industry. One visionary will win $50,000 to help bring their transformative vision to the world.

"Innovation is the cornerstone of Nissin Foods," said Price. "Mr. Ando believed 'peace will come to the world when there is enough food,' and that revolutionized the industry with the debut of Cup Noodles in 1971. Today, the brand is sold in 100 countries worldwide, selling 50 billion Cup Noodles products to date. This anniversary marks a major milestone for the brand as we continue to celebrate Cup Noodles as a global food innovator and fan-favorite, cultural mainstay."

How to enter: Entries don't need to be Cup Noodles-related but should be food-focused and inspired by the noodle-maker's beginnings and history of bold creativity. Submit a short video (no more than 1 minute in length) on your personal Instagram or Twitter feed, using the hashtag #UseYourNoodleContest to share your most innovative food idea, the inspiration behind it, and how it could revolutionize the food industry or pop culture. Be sure to tag @OriginalCupNoodles on Instagram or @OrigCupNoodles on Twitter so we can see your creative ideas.

"I'm honored to celebrate Cup Noodles' 50th birthday by helping an aspiring innovator disrupt the way we think about food," said Bernath. "Inspired by Mr. Ando and his belief that 'inspiration leads to invention,' the 'Use Your Noodle' contest not only honors and celebrates the brand's history of innovation, but also encourages the next generation of culinary thinkers to dream big for a chance to turn their ideas into reality!"

For complete submission guidelines and how to enter the "Use Your Noodle" innovation contest, visit nissinfoods.com. Call for entries will close on October 15, 2021.

Nissin Foods was established in 1958 by Momofuku Ando, who invented the first instant ramen noodle in Japan inspired by his belief that "peace will come to the world when there is enough food." In 1970, Nissin Foods USA opened its first plant in Gardena, California, introducing ramen noodles to American consumers. In 1971, Cup Noodles was launched in Japan, and then debuted as Cup O' Noodles in the U.S. in 1973, revolutionizing the industry by creating a product that could package, prepare, and serve noodles all in one. For over 60 years, Nissin Foods has created delicious and convenient Asian-inspired meals at an affordable value. Nissin Foods USA develops and markets a variety of products including Cup Noodles®, Top Ramen®, Cup Noodles® Stir Fry™, Hot & Spicy Fire Wok, and RAOH®. The company's corporate philosophy inspires commitment to taste, convenience, and quality.