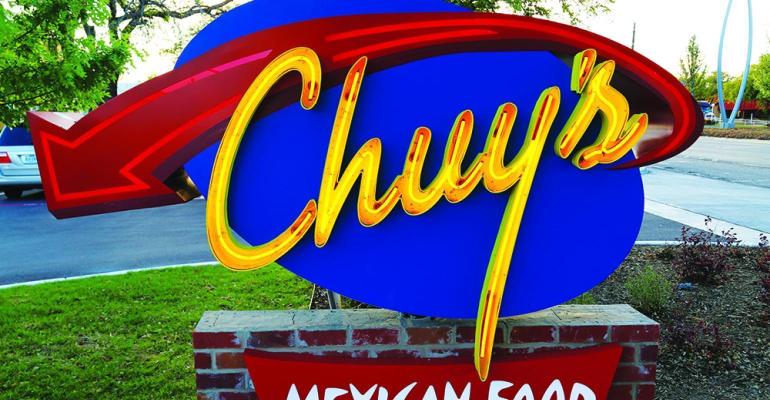 Chuy's is aiming for six-to-nine new restaurants this year and 10% growth in 2024 and beyond.
Marketing

Chuy’s is getting some momentum from LTOs, catering

Chuy’s has also maintained much of its off-premises sales mix, which is more than double pre-pandemic levels.

Historically, Chuy’s has shied away from limited-time offerings, but that changed in the fourth quarter with the launch of a new platform – Chuy’s Knockouts, or CKO. The three new menu items ran for a six-week period and generated a strong enough tailwind that the nearly 100-store casual dining chain now plans on running such promotions each quarter.

“This is the first time we’ve done that. We’re very pleased with the numbers. Normally, you see a spike during weeks one, two and three and a dip in four, five and six. We didn’t see that. It was stable the whole time and that’s exciting,” CEO Steve Hislop said during the Jefferies Winter Restaurant, Foodservice, Gaming, Lodging & Leisure Summit over the weekend.

The CKO platform made up 2.5% of the chain’s sales mix and contributed to a 1.5% guest count increase that has continued since the promotion ended. Additionally, the new items created excitement from employees, Hislop said. Moving forward, Chuy’s will tinker with a barbell approach on the CKO platform to test what customers are willing to pay up for.  The CKO lineup will be one of four areas Chuy’s will focus its marketing efforts on this year, in addition to its core food and drink items, its culture and its made-from-scratch approach. The chain will also ramp up its catering channel with the hopes of creating a higher sales mix. Chuy’s had catering in about 13 markets prior to the pandemic and has since built that up to 17 markets. The channel generated about 2.6% of sales last year, which increased to about 3.7% in the fourth quarter.

Catering is contributing to Chuy’s elevated off-premises mix overall, which used to run 12-to-14% and has since more than doubled. In addition to catering, close to 10% of that is on delivery, while the rest is carryout.

Chuy’s is also riding some momentum from other changes made throughout the past few years, including the elimination of one and a half work stations, a tighter menu, shorter operating hours in some restaurants and smaller buildings. Traditional Chuy’s restaurants are about 7,600 square feet and the company’s new prototype is about 5,500 square feet with an enhanced to-go area and bigger patios.

“There are some small sites in the past that we passed on because we thought they were too small. With our model today, we can basically fit that into a lot more sites,” Howie said. “That’s the prototype we’re going to build – it’s a more efficient box.”

These prototypes yield average unit volumes of $3.5 million to $3.7 million “or better,” Howie said, and stronger cash-on-cash returns. They’ll support the chain’s expansion plans in the next three to five years, including a goal of six-to-nine new units this year and 10% growth next year. The chain is focused on growing in five of its existing 17 states where it has the highest AUVs and strong brand recognition, and the company has identified close to 100 sites in those states that won’t cannibalize existing stores.

“This gives us consistent growth and a lot less risk because we know in those states, the AUVs are a lot higher than average and we know our margins de-risk the situation,” Howie said.