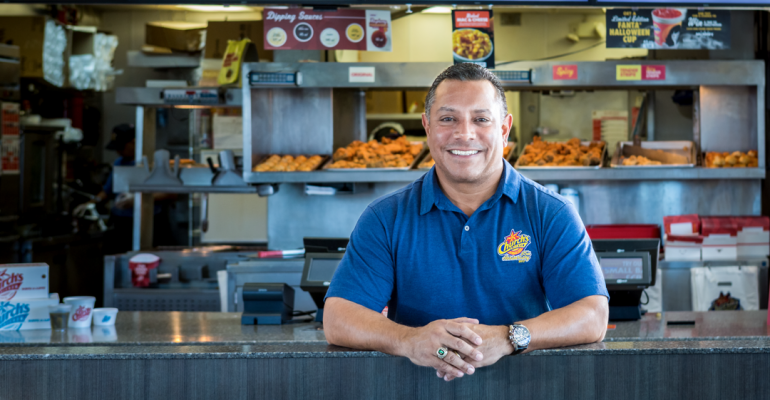 Just over a year ago, Hector Muñoz started his second stint at Church’s Chicken.

The chief marketing officer of the Atlanta-based quick-service chicken chain began his foodservice career at Church’s Chicken in 1991. “There are a lot of things that are still the same,” Muñoz said. “It’s obviously still a great fried-chicken product. The biscuits are still delicious. There are lots of franchisees that were there when I started. A lot of them were actually working in the restaurants or were multi-unit managers. Now they’ve climbed through the ranks and are owners, so at least a dozen [are franchisees] I know based on relationships I had when I was first starting out.”

“We’ve had a great year, and there’s nothing but upside with this brand.” Muñoz said of Church’s Chicken.

Although both Popeyes and Church’s Chicken are based in Atlanta, their heritages lie elsewhere. Popeyes underscored that fact starting in 2008, when it changed its name from Popeyes Chicken & Biscuits to Popeyes Louisiana Kitchen.

Church’s Chicken opened its first location in San Antonio, across from the Alamo, in 1952. Muñoz, who is working on a new brand strategy that he plans to unveil in the fourth quarter, said he intends to leverage the chain’s heritage.

“It’s got a lot of rich history, and a lot of these assets have been dormant for the last 10, 15, 20 years,” he said. “So it’s my job now to revitalize that, be in a position to create a story and be able to articulate that moving forward in an effort to become relevant.”

For example, since Church’s Chicken has been offering jalapeño peppers with its chicken, customers have developed a ritual of squeezing the peppers’ juice onto their chicken.

“I mean, that was the original spicy chicken,” Muñoz said, “and it’s something that’s been going on since we introduced jalapeño peppers in the restaurants. So that’s an example of a ritual that we could really bring to life and make a story out of it.”

There are also opportunities to promote the chain’s culinary chops.

“We have the best spicy chicken in the industry. We don’t talk about that. That’s another opportunity,” he said. “We have the best biscuits in the industry. They’re made from scratch. They’re delicious. We don’t talk about them. So those are some of the assets that have been dormant that it’s now my job to really figure out how to tell that story.”

Popeyes under Muñoz had monthly limited-time offers, and Muñoz said he’s working on a product pipeline for Church’s Chicken as well.

Last month, the chain reintroduced Smokehouse Chicken, bone-in chicken with a spice rub that gives it a smoky flavor, and is fried but not battered. The chicken is available through June 24, priced at $5 for half a chicken with a biscuit and choice of side.

“It’s a product that we’ve had a lot of success with in the past, and we’re using it strategically as a springboard for continued innovation around this platform that’s going to happen very shortly,” he said, but declined to elaborate on that innovation.

But he noted that while other chicken chains focus on boneless, Church’s Chicken would likely innovate in bone-in chicken.

“Our goal with this product is to convey to consumers that bone-in chicken isn’t old-school, he said. “That it doesn’t have to be boring, that there is an opportunity to innovate around bone-in chicken.”

Muñoz and his team have interviewed more than 6,000 people throughout the world to develop a new brand strategy both for the roughly 1,000 domestic Church’s Chicken locations and the 500 Texas Chicken units in Latin America, the Middle East and Asia.

“There’s a lot of history in this brand,” he said. “And my job is to be in a position to define what that is and then articulate that throughout the world.”