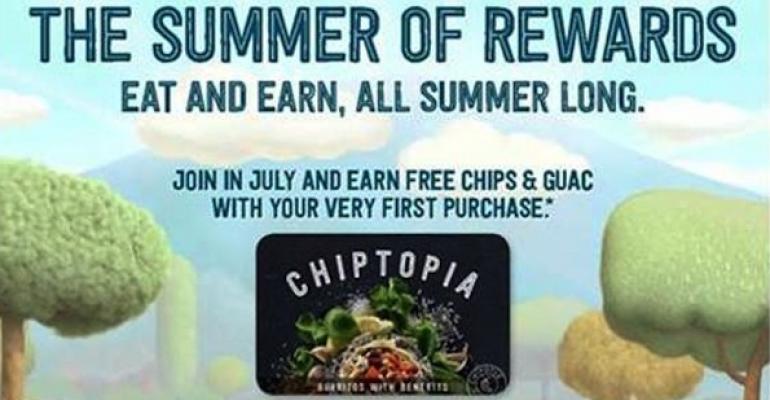 Chipotle Mexican Grill Inc. this week is scheduled to launch what could be the most complex restaurant chain loyalty program yet, one designed to keep its most frequent customers coming back to earn free food over the next three months.

Dubbed “Chiptopia,” the summer rewards program kicks off July 1 and is based not on dollars spent or points accumulated, but on frequency of paid visits. The more guests eat at Chipotle, spending a minimum of $6 before tax, the more freebies they can earn.

And while the summer loyalty program is a temporary measure to spark traffic lost after a series of foodborne illness incidents last year sent the Denver-based chain into a tailspin, company officials hint that a more permanent rewards program is in the works.

“We created Chiptopia to reward our most loyal customers who continue to support our efforts to cultivate a better world,” said Mark Crumpacker, Chipotle’s chief creative and development officer, in a statement. “While Chiptopia Summer Rewards lasts just three months, we will be carefully listening to our customers and using what we learn as we consider the design of an ongoing rewards program.”

The move may be just what Chipotle needs to rev up its recovery.

Chipotle’s foodborne illness crisis was officially over in February, and a flurry of coupons and buy-one-get-one offers that followed resulted in modestly improving same-store sales that climbed from a decline of 36.4 percent in January to a decline of 22 percent in the first three weeks of April.

For the first quarter overall, same-store sales were down 29.7 percent. The company is scheduled to report second-quarter results on July 21.

After the first-quarter report in April, Crumpacker said the chain saw single-digit declines in frequency from its most loyal customers, those who visit Chipotle 25 or more times per year. Chiptopia is designed to bring that customer back into the habit of visiting Chipotle as they did before the foodborne illness crisis hit last year.

The answer may require more work than summer-dulled brains can handle. Still, those who do the work will find a treasure trove of free food.

The program offers three levels of status: Mild, Medium and Hot. The first step is to visit a Chipotle in July and pick up a Chiptopia card.

Just doing that before July 31 earns guests free chips and guacamole with their first entrée purchase of $6 or more, and they’ll be eligible for special bonus rewards at the end of the promotion.

Once guests have a Chiptopia card, they can earn credit toward the various status levels for individual visits within the month. During each month of the program, a customer’s fourth, eighth and 11th visit with entrée purchase triggers a reward for one free entrée and elevates the customer to a new status level.

For example, a guest that picks up a card on July 1 with his lunch, who comes back for a meal another three times during the month, can reach Mild level and earn a free entrée.

Redeemed rewards also count as a purchase toward attaining the next status level, but guests can only visit once per day, and even if the guest buys three meals at a time, it only counts as one visit.

At the end of the month, everything resets and Chiptopia participants must begin again.

Customers that earn the same status level three months in a row will be eligible for bonus rewards. Those who achieve Mild status during each of July, August and September, for example, earn an additional free entrée.

Three months of Medium status achievement earns guests $20 in Chipotle merchandise at store.chipotle.com. Guests who manage three consecutive months at the Hot level can earn a catered banquet for 20, a $240 value.

Not clear is whether delivery or catering orders count toward Chiptopia achievement. Complete details about the program are available at Chipotle.com/chiptopia.