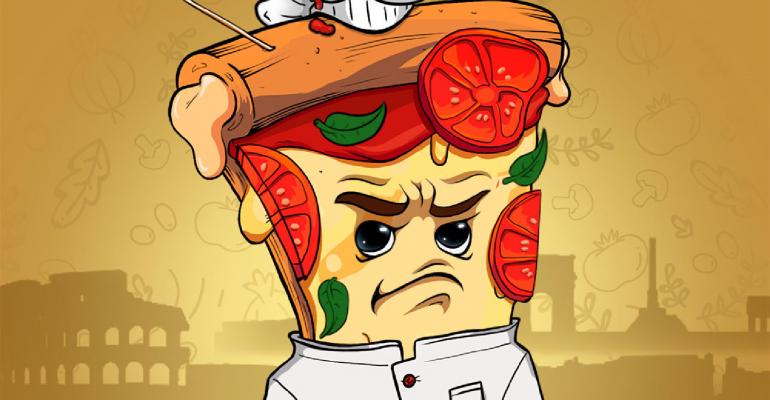 An example of a CHFTY Pizzas NFT avatar. Each is unique.
Marketing

Chfty Pizzas NFT to go on sale this week on Ethereum

The NFTs — represented as images of pizza slices as various characters — are scheduled to go on sale publicly on March 24. The plan is to sell 2,777 of them for the initial price of .07 ETH, or the cryptocurrency Ethereum, which as of Monday was about $205, plus “gas,” or transaction fees.

But first, a private pre-sale is scheduled for March 23, available only to those on the elite “Slicelist,” a designation within the group’s Discord, a social media platform where Chfty Pizzas has been building a highly engaged network of fans and professionals from the food-and-beverage world for months.

If all goes as planned, Chfty (pronounced “chefty”) Pizzas will establish a more than $500,000 funding base that will help the founders build a community designed to “bridge the gap between the food-and-beverage community and web3.”

Mendelsohn, a restaurateur in Washington, D.C. known for PLNT Burger, Vim & Victor and We, The Pizza, in a recent interview with Nation’s Restaurant News explained that the Chfty Pizzas NFT is not just an avatar of a “silly” pizza slice. Each one represents a ticket of sorts to a community that could transform the way people in the food world interact.

Even without an NFT purchase, Mendelsohn and Colicchio, of "Top Chef" and Crafted Hospitality fame, have created a space where members can interact with chefs like Andrew Zimmern, for example, who might be posting on the Discord site about food in a certain airport, or Food Network star Jeff Mauro might be debating deli meats or Mendelsohn might be looking for restaurant suggestions in Austin, Texas, where he was last week for SXSW.

Some 3,000 members — including a roster of “all star” celebrity chefs such as Zimmern, Eric Adjepong, Ming Tsai, Marcel Vigneron, Amanda Freitag, Marc Vetri, Cat Cora and more — interact with restaurant operators and fans within the space, which is something like a blend of Slack, Instagram and Twitter.

There’s plenty for the NFT curious, without having to purchase a token. The more members engage, the faster participants can level up, or obtain status within the group that unlocks certain benefits.

There are channels devoted to discussions about the best restaurants in certain cities, for example, news of cookbooks, the sharing of food photos, debates on the merits of pineapple on pizza — and there’s even a job board where members can look for jobs or recruit.

In fact, the members have helped shape what the NFT project has become, Mendelsohn said. “As you grow your community, you get to learn from them. You ask them what they’d like to see,” he said.

The NFT sale this week, however, is expected to create another microcosm of “holders,” who will have access to channels exclusively for them.

Benefits will include access to master classes, merchandise and pizza parties with Mendelsohn, Colicchio and other chefs across the country.

Mendelsohn said the master class alone is worth the NFT price of admission. “People pay hundreds of dollars for a master class just with one chef. So that utility is a great utility,” he said.

The goal is to show the value of a Chfty Pizzas NFT goes far beyond the amount it is worth in dollars or even Ethereum — though hopefully the tokens themselves will also become more valuable as an asset, despite the volatility of cryptocurrencies. The internet is rife with stories about NFTs that have sold for millions, though skeptics point to evidence of a bubble bursting.

Each Chfty NFT avatar is unique and has certain characteristics — like wearing a hat or holding a pineapple — designed to appeal to collectors, the same way some Pokemon cards might be more valuable than others, Mendelsohn said.

No doubt some will buy the NFTs as an investment and resell them, which kicks a 10% royalty back to Chfty Pizzas and generates revenue for the project.

It’s a for-profit venture and a startup that has been built by a team working largely on the promise of payoff, Mendelsohn notes, though some proceeds will go toward the Big Green DAO, a philanthropic crypto-fueled project founded by restaurateur Kimbal Musk, the brother of Elon Musk.

Ultimately, Chfty Pizzas will be one project within a larger space that will be called just “Chfty.” Mendelsohn hopes it will become the place chefs and others turn to for help entering the world of NFTs, cryptocurrency and web3.

“We will offer consulting for chefs who want to launch an NFT project. We’ll do the smart contracts. We’ll do the artwork. We’ll do it all,” he said. “Chfty is here to guide you through that because we spent a hard year getting into the space, and it’s not easy.”

Mendelsohn envisions a secondary asset that could be called a “Chfty Pass,” for example, that would give holders access to all the projects developed under the Chfty umbrella.

“If you’re part of this community, you’re going to hear about it first and get this opportunity to get these assets,” he said.

The same way a person’s profile on Instagram, Facebook or LinkedIn might define their interests, Mendelsohn believes a person’s Metamask wallet — a common method of payment with cryptocurrency, which is public — will reflect what people love and what drives their purchasing decisions.

“If you’re a foodie, it’s like a culinary passport,” he said.

But first Chfty must prove out the dream Mendelsohn and Colicchio have for the project and their ability to communicate why anyone should spend the time or money to get involved.

“The idea is, if we don’t create demand for it, no one will be able to do much in this space,” he said. “If there’s no demand for this to exist, nobody wins.”