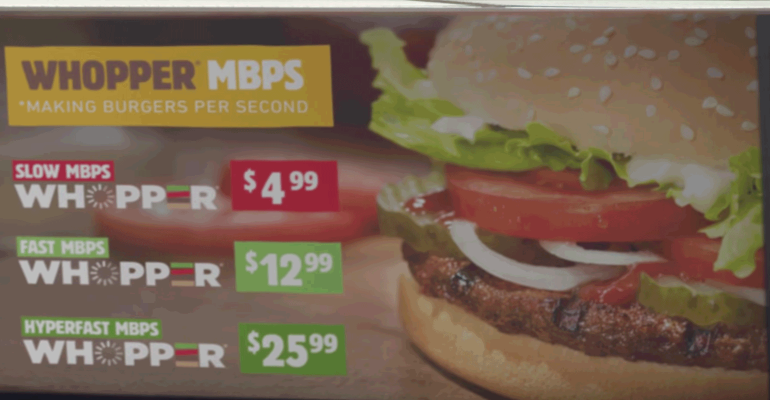 A 3-minute video that Burger King released Wednesday explaining net neutrality in terms of hamburger sales has garnered more than 1.2 million views in a day and spurred a flood of Twitter comments.

In the ad, customers paying the regular price for a Whopper are forced to wait, while customers who pay a premium — up to $26 for a sandwich — get their burgers faster.

So - the Burger King marketing department probably should be awarded a medal.https://t.co/kx9w99ITZD

I am going to @BurgerKing for lunch today and ordering a #WhopperNeutrality because of this.

Other than on election day, my wallet is my voice. Kudos. #NetNeutralty https://t.co/7VmpyfKT8w

Higher priority $26 whopper = everyone else is made worse off from negative spillover effect, i.e. not left the same

CUSTOMER (WHO IS DEFINITELY NOT AN ACTOR): pic.twitter.com/nlv9TbJ2aR

Miami-based Burger King equates that approach with doing away with net neutrality, which guarantees that Internet service providers treat all data and web traffic equally.

The Federal Communications Commission repealed those rules in December, allowing Internet providers to speed up access to some content and slowing down others.

Although this might be the first time that the Miami-based quick service chain has taken on government policy, it has gone after its opponents, most recently its giant competitor, McDonald’s, which it trolled with the launch of its Quarter Pound King Sandwich — a knockoff of the McDonald’s Double Quarter Pounder with Cheese.