Buffalo Wild Wings, in its first ad campaign since being acquired by Arby’s earlier this year, will debut a series of four 30-second commercials on Thursday in preparation for the professional football season, which starts on Sept. 6.

The casual-dining sports bar chain of more than 1,200 restaurants is also launching $5 specials and an exclusive game in partnership with fantasy sports contest company DraftKings.

The Escape to Football advertising campaign was developed by Figliulo & Partners and is comprised of four 30-second spots of people in tedious situations — a PTA meeting, a house tour, an office meeting and taking family photos — who flee to watch a football game with the cheering crowd at a Buffalo Wild Wings. The commercials will run through football season and additional ads will run on the radio.

The campaign, with the catchphrase “Buffalo Wild Wings: Wings, beer, sports,” also features a new logo with a forward-leaning buffalo and a brown and honey mustard color palette.

Starting Sept. 6, the chain is offering $5 specials Thursday through Monday, including specialty cocktails, tall craft and imported beer, 38-ounce pitchers of domestic beer, a cheeseburger and fries, and a new bratwurst and fries. 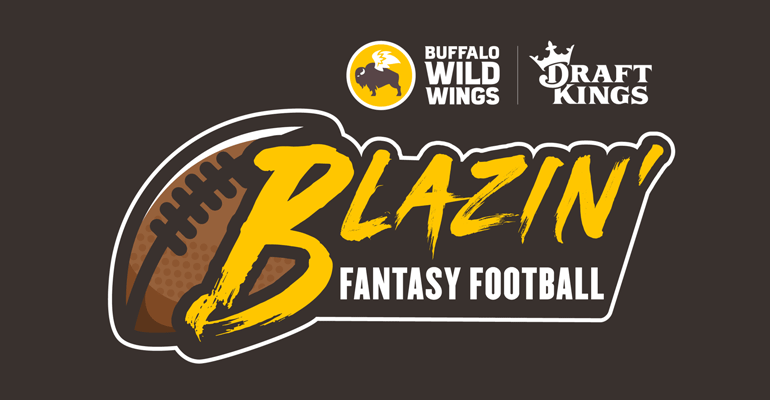 Starting Sept. 9, guests with the chain’s Blazin’ Rewards App can play Blazin’ Fantasy Football, a contest in conjunction with DraftKings that will award 600 winners a week with prizes such as free wings for a year. Guests have a chance to draft a football team with the option of selecting a player as their “Blazin’ Pick” choice. That player will receive double the points in that game.

The contests start at the beginning of each football game that starts at 1 p.m. and 4 p.m. Eastern Time on Sunday, and again at half time. Teams must be selected before the start of the first and third quarters.

Buffalo Wild Wings is also the official presenting sponsor of DraftKings’ Thursday Night Showdown contest available to all DraftKings customers, beginning Sept 6, in which players can win up to $10,000. 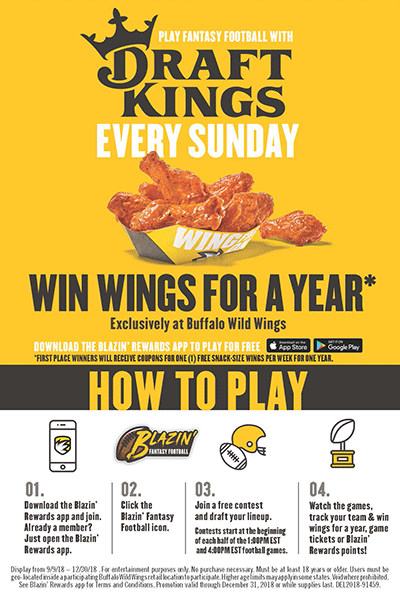 “As America’s largest sports bar, millions of fans spend their game days at Buffalo Wild Wings each week,” Paul Brown, CEO of Inspire Brands, the parent company of Buffalo Wild Wings and Arby’s, said in a press release. “We are thrilled to partner with the industry leader in fantasy, DraftKings, to deliver an experience to our guests that they can’t get anywhere else.”