This is being designed as an “edibles only” concept with a menu developed by Jeff Danzer, known as “Jeff the 420 chef.” He has also been dubbed “the Julia Child of weed.”

Budberry is scheduled to open in February 2020. Owners Jon Locarni, CEO and co-founder with Patrick Fogarty, formerly of Los Angeles-based nightclub and restaurant operator H.wood Group, are scheduled to go before the business licensing board for permits in September.

The concept will offer breakfast, lunch and dinner, though the menu hasn’t been finalized yet. Author of “The 420 Gourmet: The Art of Elevated Cannabis Cuisine,” and host of the “Wake and Bake with JeffThe420Chef” podcast, Danzer said the goal is to “redefine the cannabis consumption experience.”

Danzer has developed a unique product line called FreeLeaf, for which Budberry will be the first point of entry, he said.

FreeLeaf is a line of pre-packaged, pre-dosed herbs that mimic the flavor of plants like oregano, basil, thyme and rosemary which carry the THC and CBD potency of cannabis without the skunky flavor. The product line will include sweet ingredients, like syrups, and drink mixes also.

This will allow Budberry to serve dishes like pizza onto which guests can sprinkle their oregano-like cannabis products (the restaurant will also be a dispensary). The guest will be limited to no more than 10 milligrams per meal.

“We can’t sell to one individual more product than can be reasonably consumed on site at that moment,” he said.

The Antidote is the working name of this concept, but that may change, said owner Kirk Cartozian, who is also owner of the separate two-unit Argentinian steakhouse concept Gaucho Grill in the Los Angeles area. A third Gaucho Grill is under construction.

“We’re trying to do a true full-service restaurant,” said Cartozian, who said his company has a 4,450-square-foot location but is still doing due diligence.

This concept will be edibles only, he said. The intent is for guests to have a progressive experience, where they can be “educated by our receivers,” who will tailor their cannabis consumption individually. In the same way a bartender sometimes has to size up the customer drinking alcohol, Cartozian said his staff will have to be “in tune with what each individual’s body can absorb and handle” without having any harmful effect.

The Antidote will have a celebrity chef — whose name Cartozian said he couldn’t yet reveal — and the plan is to have a Spanish-style tapas menu. The edibles they plan to use will be prepackaged and tested, so dosage and portions can be carefully controlled.

How exactly that will work has yet to be determined. Cartozian said they may use a commissary or another supplier, but there are still challenges to work through when it comes to execution, given the maze of regulations.

The goal, however, is to create a space where all feel welcome and included, even people like Cartozian’s own parents, who may feel cannabis is taboo, he said.

The Antidote will be a separate company from Gaucho Grill, with a different ownership group, he noted. But there may be one common element:

“We might allow for the [Gaucho Grill] chimichurri to be produced in a manufacturing facility with THC” to serve at The Antidote. “So it will be cannabis chimichurri.”

The name is tentative, and this concept won’t open until 2020 at best, but Greenwolf is owned by Sol Yamini, who also owns the Pink Dot, a Los Angeles-based food and liquor delivery service.

Yamini said details are still taking shape and the location has not been finalized, so Greenwolf doesn’t yet have final approval from West Hollywood. But his goal is to create something “super high end and super nice,” that will go above and beyond what can be found in Amsterdam.

“It’ll be a destination for tourists,” he said. “We want people to talk about West Hollywood being this mecca or epicenter of cannabis.”

For the restaurant, the company is working with Seth Glassman as general manager, Yamini said. Glassman has years of experience in the Los Angeles restaurant world with his restaurant Pistola, now closed, Takami Sushi and Elevate Lounge, for example, and the multiconcept group Innovative Dining Group (Roku, BOA Steakhouse, Katana).

Yamini said they also are working with a chef who could not be revealed. Greenwolf has also partnered with cannabis retailer and manufacturer Loudpack, he said.

The Artist Tree LLC is planning two separate locations in the same plaza: a smoking lounge and an edibles outlet that will be more like a restaurant, said founder Lauren Fontein. The group also has a retail license and is planning to open a retail store in West Hollywood in October as an independent location.

Next up, hopefully in 2020, will be the consumption spots, which Fontein said are being designed as part art gallery with a performance arts stage with live music or comedians.

“It’ll be more of a hang-out space,” said Fontein. “It will be a destination.”

The edibles lounge will be a full-service restaurant. Fontein said the group is talking with Los Angeles chef and restaurateur Akasha Richmond about developing the menu. But both Fontein and Richmond said they are still in the discussion stage. “We really like her style and her current restaurant with her emphasis on organic, wholesome ingredients,” said Fontein.

Fontein, an attorney who has been working in legal compliance for the cannabis industry for several years, said the group hasn’t found the right location yet for the restaurant and lounge, though there are several potential options. The challenge is finding the right 4,000-square-foot spot within the zoning district for cannabis with a landlord open to an industry not recognized as legal by the federal government. 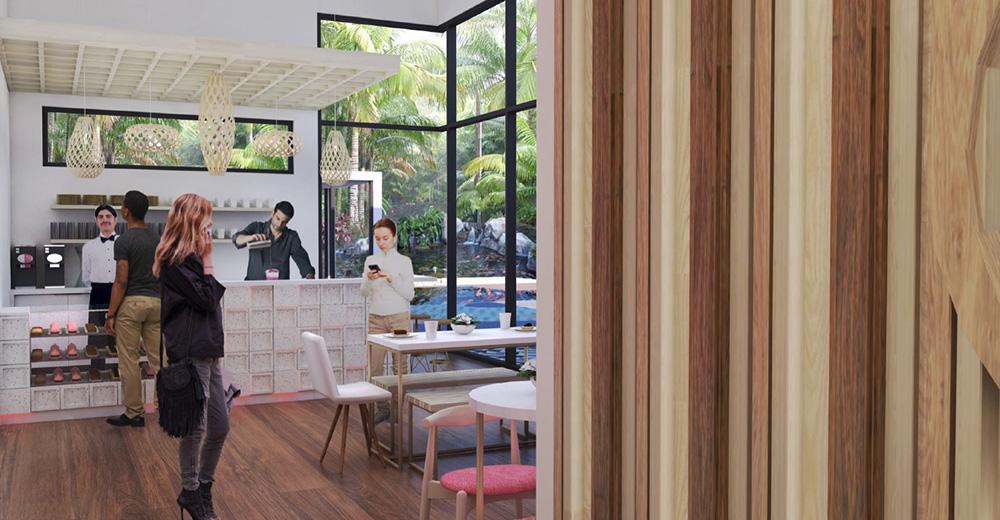