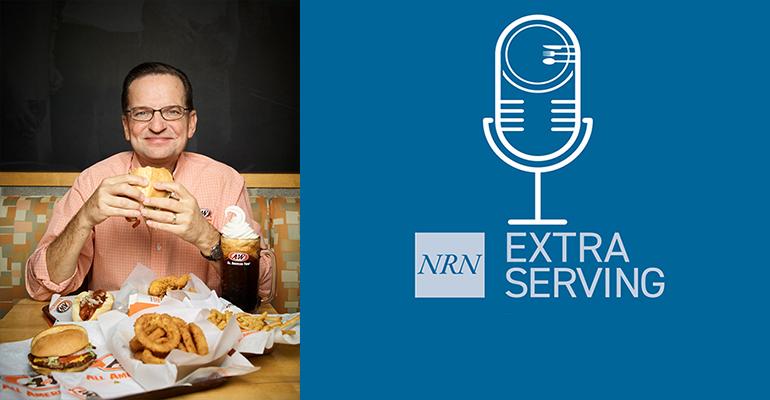 A&W expands franchise advisory board with eye toward the future

A&W Restaurants has expanded its franchise partner advisory board from 11 to 14 directors as it prepares for the next generation of leadership and stores, according to company CEO Kevin Bazner.

“The impetus behind expanding that board was to get more new and useful ideas,” Bazner said during this Extra Serving podcast. Two board members retired in the past year, he said, so the openings and expansion gave the brand an opportunity to bring in younger partners.

Yum Brands Inc. spun off the A&W U.S. and Asia business to franchisee ownership in December 2011. A&W has had a franchise association since 1972. Canadian A&W stores remain a separate company.

Bazner, who has two tenures with the A&W brand, was named CEO and president after the sale in 2011. In total, he was been with the brand 28 years.

The past 13 months of the COVID-19 pandemic provided opportunities for the A&W brand, he said, especially because of the drive-thru.

“The brand has performed exceptionally well,” Bazner said. “Our franchise partners who do all the work out there in the field with their operators and their managers have really done a terrific job, and it's really been all about execution at the drive-thur and, in our case, our legacy drive-ins.”

A spokesman said 2020 was the ninth straight year of same-store sales growth, with single-brand locations up 9.7% and entire system up 8.5%.

Freestanding restaurants with a drive-thru now average just more than $1.1 million a year in sales.

“We're benefiting from the heritage of the brand,” Bazner said. “During times of crisis people gravitate to brands that they know and they love well. We're one of those brands for 102 years now and so we've got that and that continues. And we've exposed a lot of new customers and a lot of lapsed users to our brand over the last 13 or 14 months that are continuing to come back.”

As consumers emerge into the vaccine era, A&W is seeing the 96 convenience store units, of 900 restaurants, begin to perform well compared to other traditional and co-brand locations, Bazner said.

“We're starting to see that flip this year as people are moving around more,” he said. Many of the A&W c-store units are in travel plazas.

As the brand emerges from the pandemic, Bazner said it is keeping an eyes on development costs.

“Material cost, particularly lumber, has spiked,” he said. “Indicators today are that that's going to start to temper later in the summer as a supply catches up with demand.”

During the pandemic, three units created double drive-thrus to accommodate traffic, he added.

“It's a pretty seamless process once you get it down,” Bazner said, “but we are not developing every new store with a second drive-thru because as dining rooms reopen there is a consumer– about 30% of the consumers – who still wants to come into the dining room given a choice. So we want to be careful that we don't overinvest.

“But what we are doing is we're doing the site plan,” he said, “and we're doing the underground work that we can easily add that second order point if the business demands.”

Listen to the rest of the conversation in this Extra Serving podcast.