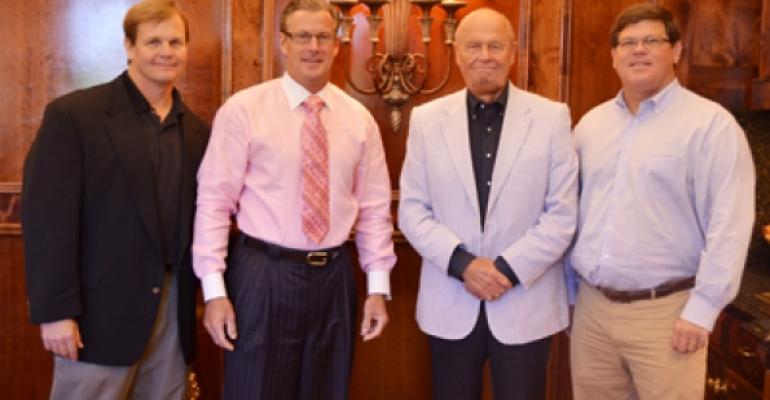 Zaxby’s has signed a multi-unit development agreement with Wendy’s franchisee Hoover Foods Inc. for the Virginia cities of Richmond, Norfolk and Virginia Beach.

This is the first time Zaxby’s has sold the rights to develop an entire market, according to officials at the 550-unit fast-casual chain, which specializes in chicken fingers and Buffalo wings.

Duane Hoover, head of Hoover Foods, based in Suwanee, Ga., has developed more than 100 Wendy’s units over the past 40 years and currently owns more than 50 of them, mostly in Atlanta and Florida, as well as several Subway units. He said he was looking for a restaurant company that had a corporate culture similar to Wendy’s in terms of integrity, commitment to quality and treatment of employees and customers.

“Zaxby’s kept coming up,” he said. “The food is wonderful. It’s fresh and comes in on ice every day, and they hand-batter the chicken. It has very similar goals and objectives to Wendy’s.”

Hoover said his agreement with Zaxby’s was similar to Wendy’s-style area development deals. He had previously developed Wendy’s units, which he ultimately sold, in shopping malls in Richmond and Norfolk.

“I think Zaxby’s is the next big thing," said Hoover. "We hope to be part of that dynamic growth which I think you’re going to see explode.”

He has created a new company, Hoozax Foods Inc., to develop the locations, the first three to four of which he hopes to open by the end of the year, likely in the Norfolk/Virginia Beach area, a market that he said has the capacity for 17 Zaxby’s restaurants. The Richmond market could handle 15 units, Hoover added.

“Duane shares Zaxby’s vision for the brand and brings with him added knowledge of the industry that will fuel our continued expansion plans,” Zaxby’s co-founder and chief executive Zach McLeroy said in a press release.

There are currently three Zaxby’s locations in Virginia — one each in Roanoke, Salem and Williamsburg. The Athens, Ga.-based chain also has restaurants in Alabama, Arkansas, Florida, Georgia, Indiana, Kentucky, Mississippi, North Carolina, South Carolina, Tennessee and Texas. More than 80 percent of them are franchised.

Editor's note: An earlier version of this story incorrectly stated the location of Zaxby's company headquarters.