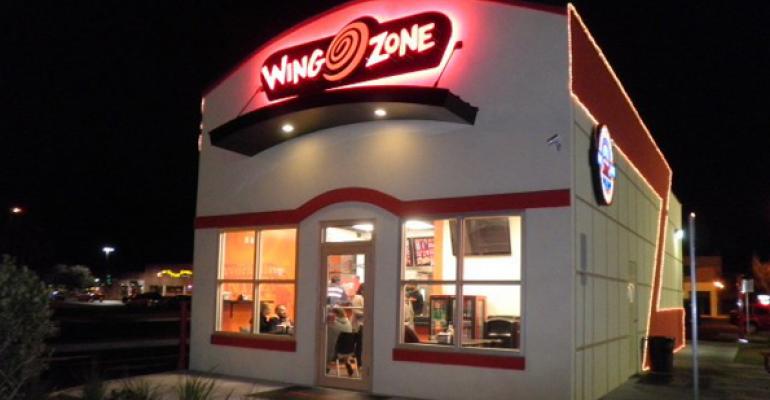 Wing Zone soft-opened its flagship unit Sept. 10—a nearly 50-seat unit in Smyrna, Georgia, that will focus on product development, training and new food service strategies for the brand.

Among the key aspects of the flagship, which will hold its grand opening in mid-October, are its drive thru in lieu of delivery and its digital menu boards, both of which are intended to propel the brand into the future, said Matt Friedman, Wing Zone’s chief executive and co-founder. The facility will also serve as the brand's main training zone for new franchisees, he said.

Delivery is still a hallmark at most Wing Zone locations, but with this product and service development unit, it’s possible to try out a new core model and more easily train new franchisees on new practices, Friedman noted. Drive thru, he said, will be a vital part of Wing Zone’s future.

The dining area at the flagship location is also much larger than the average Wing Zone, with the full store totaling 1,700 square feet. Atlanta-based Wing Zone currently operates 83 stores in the U.S., and eight abroad.

“This is really our core model going forward,” he said of the drive-thru flagship store.

Freidman spoke with Nation’s Restaurant News about the flagship store, as well as the strategies his chicken wing chain is using to spur growth.

At this test location, you’re using drive thru instead of delivery. Why is that?

The delivery business has changed and it has become a lot more challenging. Fuel prices are tough. Labor costs are an issue. We can be more profitable without it. We can reduce our labor significantly by doing non-delivery locations.

Wing Zone still [has locations] that deliver. Specific markets work for delivery—colleges do well, military bases do well. That type of consumer really has a desire or need for delivery.

The other big thing about this [drive-thru] model is that it’s a little bit larger. We are focusing more on a dine-in focus. We consider it to be mixed dine-in and take-out concept. At this point we’re doing 50 percent of our dining in stores and 50 percent either by delivery or drive thru

What impact does delivery versus drive thru have on average check?

In this [delivery] take-out model the average check is $11. Traditional take-out delivery is $16 on an average check. We’re getting more and more people through the drive thru, but more people who just order for themselves, instead of themselves and others.

What is the benefit of having digital menu boards?

There’s no doubt that we’ve seen that the digital menu signs have helped up average tickets because we’re able to promote certain items. It just goes to the overall improvement of the image of our stores.

We’ve really gone systemwide with them. [At the flagship location] we have digital menu boards both inside and in our drive thru. Obviously, it makes a lot of sense. We’re able to promote certain items. We’re able to redo the menu quickly without having to use static clings. Our whole new image is very modern — very bold.

[Having digital menu boards] has been a requirement for the past 12 months for any new stores, and we did an incentive for existing franchisees where their out-of-pocket expense [to replace the signs] would be $2,000. Wing Zone took up the rest of that [cost].

What else is significant about the new flagship store?

This is really a new branding for us. We do custom seating. We do branded wall graphics. This is really the store where we bring prospective franchisees, and this is where our training happens.

We wanted to build something that we could train different models in. So whether you’re a food court, a military base, or traditional location, we felt we could build this one location and have everyone trained in it. We have international people coming to train later this month. It really kind of encompasses everything we’ve been working on the last couple of years. We’ve really started out above expectations from a sales perspective.

I’ve heard that in order to make great chicken wings, you need to cook them for at least 15 minutes. Is that true? And, if so, how do you get around this in your drive-thru concept?

We have to be able to put out product in this environment in 2-3 minutes. We do fully cook the product before and [put them in heaters], and we do cook our wings typically for 11-12 minutes. We don’t customize the product, meaning flavor-fuse the product and add the sauce, until after its ordered. It’s customized and flavored once they’ve ordered it.