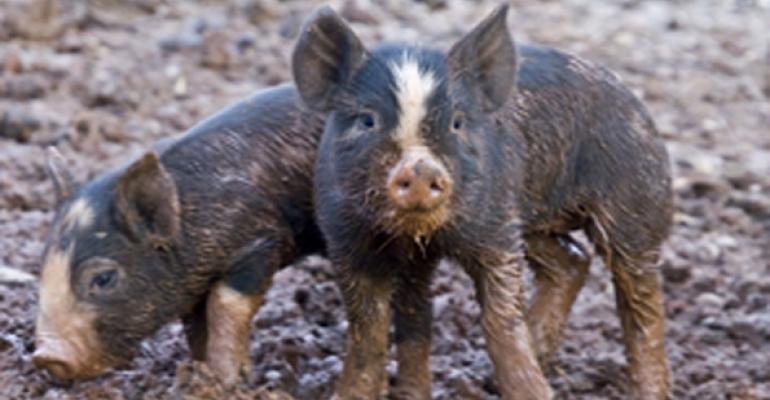 Restaurants are going to greater lengths to source local ingredients

Look at any list of trends in the food world and the word “local” will be found right near the top. Local sourcing has become a fact of life for independent restaurants, and a growing number of regional chains are joining Burgerville and Eat ’n Park in putting the fruits of their neighbors’ labor on their menus.

But lately, it takes more than an onsite garden or shopping at the farmers market to get customers’ attention. Some smaller chains and independent restaurants are going to great lengths to cultivate local bounty and share it with their customers, as evidenced by the efforts of Jim 'n Nick’s, No. 246, Kelly Liken and Sweetgreen. Here's a look at those efforts.

Nick Pihakis wanted to source the sort of naturally raised, free-range pork that Chipotle Mexican Grill uses at its 1,225 restaurants for his 29 Jim 'n Nick’s units throughout the Southeast, and he wanted to buy locally raised hogs.

However, he said, “When I first started considering sourcing our own product seven years ago, I rode around Alabama and Mississippi, and there was really no infrastructure for it." So he decided to build his own infrastructure.

Pihakis will be opening his own hog processing plant in Eva, Ala., 59 miles north of Jim 'n Nick’s headquarters in Birmingham, Ala. Funding for the project came partially from the state of Alabama, which gave a grant to Morgan County to reopen the plant, which previously was used to process emus.

The plant is slated to start operations on October, and Pihakis’ goal is to process 162 hogs at a time, twice a week, to fulfill the chain’s demand for 320 to 330 hogs per week.

And that’s just the beginning. Pihakis is now working with five farms to breed the ideal hog. The farmers are currently breeding a mix of fatty Mangalitsa and meaty Berkshire, but Pihakis plans to introduce some Yorkshire into the mix. “We’re experimenting every day,” he said, adding that he hopes to get up to 40 farmers in the program.

Although he said that his approach will never be cheaper than mainstream production, Pihakis noted, “It’s got to be affordable, it’s got to be available, and people have to be aware of what we’re doing."

He said raising hogs outdoors costs about twice what it does to produce them using mainstream methods, so he has to save money by doing his own processing. Transportation costs need to be streamlined, too, and to help facilitate that, one of Pihakis’ distributors is a partner in the plant. The distributor will help strategize back-hauling of deliveries, similar to what Sweetgreen is doing to get product from its farmers.

Additionally, plans are underway to make cured meats and sausages at the plant. “The real money is in value-added products,” he noted.

“Once it’s scalable, then it will change the way we do food in the South,” said Pihakis, who currently owns a total of 62 restaurants, including the 22-unit Taziki Mediterranean café chain and some smaller chains and single unit restaurants. “Hopefully, we’ll be able to serve pork that we’ve controlled from birth to plate."

No. 246: Foraging for ingredients

Executive chef Drew Belline and pastry chef Taria Camerino of restaurant No. 246 in the Atlanta suburb of Decatur, Ga., are part of a growing number of chefs that forage in the area for what they need. Camerino tracks crabapples, mimosa flowers and figs to use in the desserts at that restaurant and sister venues JCT. Kitchen & Bar and The Optimist. Belline was foraging for ramps this past spring.

“Mostly I’m really big into mushrooms,” Belline said, expressing delight at his haul of chanterelles, hedgehogs, black trumpets and oyster mushrooms. “Then it gets really fun in later September, when we get a big push of wild maitake mushrooms — like anywhere from 10- to 25-pound mushrooms.

“We’ve also messed around with getting some sassafras and making homemade root beers out of different barks,” he added.

So where does an executive chef find the time to go foraging?

“This is kind of what I do on my day off,” Belline said. He also goes "urban foraging" during work hours.

“During work, if I know we had a good rain, between lunch and dinner service I forage in Decatur for chanterelles and muscadine [grapes], which seem to grow together." Unfortunately, poison ivy grows with them, too, he added.

Kelly Liken: Reaching out to kids

Kelly Liken, the chef-owner of the eponymous fine-dining restaurant in Vail, Colo., gets the children in her community involved in her sourcing efforts, starting with the local annual 4-H animal auction.

“Every year we purchase a steer raised by one of our local kids,” she said. Then the restaurant features the youngster’s animal on its menu — “Jacob Schweiger's 4-H beef,” for example — and encourages guests to ask about the daily preparation.

“Of course there are only so many New York strips and tenderloins," Liken noted, "so this becomes a great way to honor an animal by utilizing everything from snout to tail."

Liken and her husband Rick Colomitz, the restaurant’s general manager and wine director, also established a nonprofit organization called Sowing Seeds, intended to teach elementary school students where their food comes from. The program includes a classroom, a greenhouse and outdoor raised beds. Sowing Seeds’ director, Sandy Story, developed the curriculum and is working on extending it to middle school.

Sowing Seeds is currently in three schools and is slated to enter two more. “Of course we buy produce from these students to use in the restaurant on a regular basis,” she said, including semi-exotica such as the Mexican herb epazote.

Sweetgreen, a salad and frozen yogurt chain founded in Washington, D.C., in 2007 by three recent Georgetown University graduates was founded on the green principles of the day. The original unit was made mostly with recycled products and an intention to use local products when possible and organic products when they couldn't use local.

Now with 13 locations in two markets — the greater Washington area and Philadelphia — partner Nicolas Jammet said anywhere from 25 percent to 40 percent of their product is local, depending on the season, with summer and fall being the best time of year.

“We used to just go to the farmers markets and then go to the stores,” Jammet said, “and if you have one, two or three stores, the farmers can drop it off.” But once a chain gets bigger than that, as Sweetgreen did, “distribution becomes a challenge,” he noted.

Supply becomes a challenge as well. “We need pretty high volumes of everything we use,” he said — and that eliminates some smaller farmers. On the other hand, Sweetgreen’s volumes are now high enough that if Jammet wants to buy from a local farm, it’s worth it for his distributors to pick it up.

On top of that, Jammet said he has worked with distributors who now send their empty trucks, returning from deliveries two or three hours away, to stop by farms on their way back. “It’s super-efficient and more environmentally friendly,” he said.

Sweetgreen’s menu is mostly standardized, and the chain sources out-of-season items of the best quality possible from wherever it can find them, but it highlights local, seasonal items in its monthly salad. In September the salad includes eggplant, basil, bell peppers, tomatoes and mesclun greens.