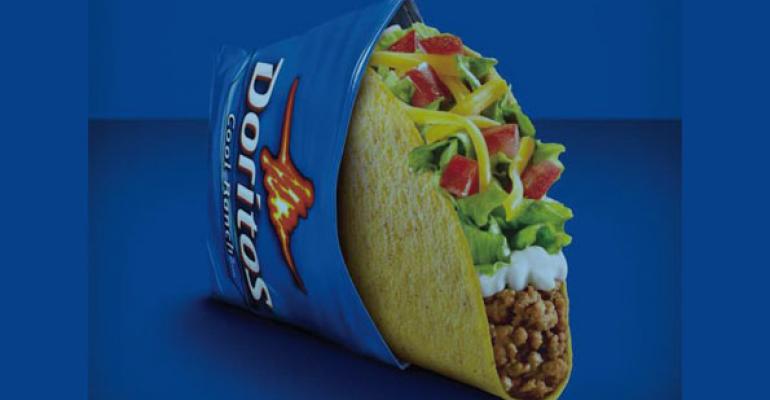 With its introduction earlier this month of a Cool Ranch version of Doritos Locos Tacos, Irvine, Calif.-based Taco Bell has sustained the major improvements it made during 2012 to its brand buzz, according to new research from YouGov BrandIndex.

For the past 14 weeks, Taco Bell has steadily risen above the average "buzz score" for national quick-service chains among consumers who have dined at Mexican restaurant chains.

BrandIndex calculates its proprietary buzz score by surveying more than 5,000 people each weekday and inquiring for every brand, “If you’ve heard something about the brand in the past two weeks, was it positive or negative?” Positive responses are subtracted from negative responses, and a moving average between negative 100 and positive 100 is calculated, with a zero measurement denoting neutral perceptions about a brand. Respondents in this recent study were screened to include only American consumers who had dined at any Mexican restaurant in the past month.

Over the past year, buzz scores for the 5,600-unit Taco Bell improved to the point that the brand consistently began outweighing the indexed buzz score for all quick-service brands when Mexican-food fans were surveyed. At the brand’s lowest point in March 2012, its buzz score of 10.8 trailed the segment-average score of 17.6. By October 2012, Taco Bell's buzz score began scoring consistently above the industry average.

“Taco Bell was below its industry peers [in buzz perceptions], even among Mexican-food eaters, so that’s the clear improvement,” said Ted Marzilli, senior vice president of New York-based BrandIndex.

Taco Bell’s buzz scores were hovering between 20 and 21 in the winter, even before the March 6 launch of Cool Ranch Doritos Locos Tacos. The day of that introduction, the chain’s buzz score was 19.1, ahead of the segment average of 15.7. The buzz score then rose to a high of 21 on March 16-17 before leveling off slightly and finishing back at 19.2 on March 25 — well above the industry average of 15 on that day.

The Doritos Locos Taco was a major restaurant industry standout in 2012, powering Taco Bell’s same-store sales recovery most of the year, including a 13-percent increase in the second quarter, the first full period that it was on the menu. The item won the 2012 MenuMasters Award for Best New Menu Item.

The quick-service brand’s “buzz score” jumped from a low of 10.8 days before the March 2012 introduction of Doritos Locos Tacos to a yearly high of 20.2 the following December — far exceeding the threshold to be considered statistically significant, according to Marzilli.

“Taco Bell has had two at-bats, and they’ve hit the ball well both times,” he said. “If they keep doing this in a way where consumers are just waiting for the next flavor because it’s a great experience, this could last several more years."

However, Marzilli cautioned that there may be a cap on the number of flavors of Doritos Locos Tacos the chain could realistically sell. "My sense is there’s a limit, and I don’t know if it’s one more flavor or a dozen, where maybe it gets overwhelming,” he said.

Taco Bell is a division of Louisville, Ky.-based Yum! Brands Inc., which also operates or franchises KFC and Pizza Hut.