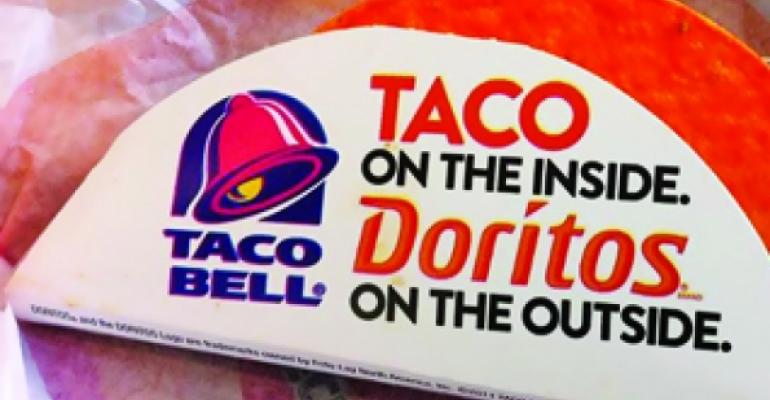 As Taco Bell chief executive Greg Creed said to investors gathered Wednesday at the Morgan Stanley Retail and Restaurant Conference, “what a difference a year can make.”

At this time last year, Taco Bell was fighting its way past the damage a consumer lawsuit caused to its reputation and same-store sales, Creed said.  Now, based largely on the success of its Doritos Locos Tacos rollout — Taco Bell has sold more than 100 million of them in a little over 10 weeks — the brand is projecting second-quarter same-store sales in the high single digits to low double digits. Creed added that the turnaround’s momentum could carry over into several initiatives for 2012 and beyond.

“Taco Bell has an exciting story that is driven out of insights, and the evidence suggests that what happened a year ago is now history,” Creed said. “We’ve rebounded about as well as we could.”

He laid out several strategies Taco Bell plans to implement in the coming years to drive sales, including an expansion of Doritos Locos Tacos, as well as the continued test and eventual rollout of the Cantina Bell menu, the FirstMeal breakfast platform, and a new Happier Hour daypart for snacking.

Several key insights informed the menu moves Taco Bell has made this year, Creed said, including the notion that customers have moved from “food as fuel” to “food as experience.” He added that Taco Bell’s most frequent users wanted the brand to just be better, while light and lapsed users needed the chain to become more relevant.

“To be a better Taco Bell, the obvious solution was the Doritos Locos Tacos,” he said. “People love it, it’s driving frequency among our heavy users, and we’re selling it at a 30-cent premium. … It’s really a platform we can build off, not a one-off LTO, and we can drive it for years to come.”

Of the more than 100 million Doritos Locos Tacos sold since the product’s March 8 launch, about 90 million of those transactions have been incremental, Creed said.

The next version of Doritos Locos Tacos will be a Cool Ranch flavor to complement the Nacho Cheese item, which is now a permanent fixture on Taco Bell’s menu, Creed said. A Hot and Spicy version likely would come later next year, and the fact that Frito-Lay has more than 100 flavors of Doritos around the world speaks to the limitless potential of the product, he said.

Taco Bell hired 15,000 incremental staffers in its system of 6,000 restaurants in the United States to accommodate demand for its “fastball down the middle,” Creed said. Its taco shell suppliers and Frito-Lay will expand their manufacturing capacity to produce more shells.

Creed also disclosed that the Cantina Bell menu currently being tested in Louisville, Ky., and Bakersfield, Calif., would roll out systemwide before the end of the year. Taco Bell will “flip the switch” overnight rather than introduce the higher-end menu incrementally across the country, he said.

The menu, which is intended to elevate the brand’s perceptions of food quality and freshness with items like burrito bowls, whole black beans, and corn and pepper salsa, has increased not only average check and average unit volumes but also guest counts in test marketing.

“What’s interesting is that Cantina Bell has done slightly better in Bakersfield, where there is a bigger presence of Chipotle [Mexican Grill],” Creed said. “Chipotle kind of acts as a context for this menu.”

Not only does the Cantina Bell menu sell more premium products below the $5 price point, but its consulting partner, celebrity chef Lorena Garcia, also has worked with Taco Bell to reformulate its core ingredients to higher-quality specifications.

“In testing, we’ve seen significant movement in our quality scores, freshness scores and all the other things that will really halo across the brand,” Creed said. “It will fundamentally change people’s perception of our overall brand.”

The brand’s First Meal breakfast platform, currently in test in 750 locations in the West, would spread to another 250 locations this year, Creed said. The menu will roll out to another 1,000 locations next year, including in Texas and Florida, and is expected to be in place systemwide by the end of 2014.

“We’re trying to do what we did for late night and build the business one hour at a time,” he said. “We have a simple economic model: If you reach a certain threshold for sales in the last hour of trading, stay open later another half hour. We’re going to do it in reverse for breakfast.”

Creed added that the Happier Hour menu Taco Bell plans to begin testing for in between meals could be an “icing-on-the-cake opportunity for the business,” driving incremental traffic without risking customers trading out from higher-price items at meal times.

“People are grazing a lot more, so the ability to have a daypart where you don’t have to sell a complete meal catches up with how people are eating,” he said. “These won’t be traditional snack items like cupcakes or cookies, so it will be a nice way for us to address this grazing, snacking behavior in a way that comes from our value proposition at our everyday price points.”

Taco Bell is on pace to have 55 percent of its locations in the United States reimaged to its “Bold” décor package by the end of 2012, and franchisees are enthusiastic about getting the domestic system to 90-percent remodeled by the end of 2013, Creed said.

After that, Taco Bell plans to move forward with a new prototype design. One company-owned store and one franchised store will be built next year to reflect the new building design, both in the state of Texas, he said.

The goals of all the reimaging and the eventual shift to a new prototype are to grow average unit volumes by approximately $150,000, reduce building costs by another $150,000 and improve profit margins by about 3 percent, Creed said.

Editor's Note: A previous version of this story has been updated to state that Taco Bell hired 15,000 incremental staffers to accommodate for the Doritos Locos Tacos.