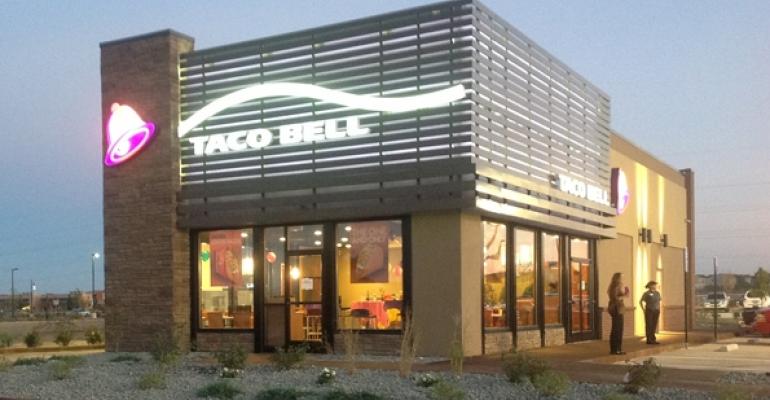 Taco Bell is working on improving the nutritional quality of menu options, saying that the tastes and needs of customers are evolving.

Without offering specifics, the Irvine, Calif.-based quick-service chain announced general goals for developing more meal options that meet recommended nutritional guidelines based on the notion that most customers eat three meals a day — even though Taco Bell is notorious for suggesting a Fourth Meal daypart.

With a menu-labeling mandate on the near horizon, Taco Bell is not alone in any move to add more healthful offerings. However, the chain’s “commitment” to nutrition, announced Wednesday, remains somewhat vague.

The company set a goal of improving its nutrition profile by the year 2020 in two ways:

The chain will offer meal options that meet one-third of U.S. Dietary Guidelines for Americans Recommended Daily Intake values. The one-third is a reference to the notion that any meal at Taco Bell will be one of three consumed in a day.

In addition, the company intends for 20 percent of combination meal options to meet one-third of the recommended guidelines.

Nutrition guidelines vary, but for a man who should be aiming for about 2,000 calories per day, that would mean Taco Bell would be striving for less-than-660-calorie options. Under the guidelines, those items would also be designed with less than 25 grams of fat and about 760 milligrams of sodium.

Taco Bell noted that there is much on the current menu that already meets those guidelines. A Cool Ranch Doritos Locos Taco Supreme, for example, has 200 calories and 12 grams of fat. Two of those tacos, however, along with a 30-ounce Mountain Dew Baja Blast, bring the calorie count to 810, with 24 grams of fat, which would not likely be deemed a healthful choice by most dietitians.

Margo Wootan, director of nutrition policy for the Center for Science in the Public Interest in Washington, D.C., said the guidelines were a good start.

“It’s great that Taco Bell is looking at the nutritional quality of its offerings, especially because eating out is a much bigger part of Americans’ diet that it was in the past,” she said. “Today people get about one third of their calories, on average, eating out.”

Wootan said she was pleased to hear the chain intended to have more than one or two healthy options, as some restaurant chains do. “I hope to see them add more fruit and vegetable options that are balanced and healthful, but also satisfying,” she said. “Most people are not going to be satisfied by two tacos and a soda.”

Taco Bell said it has already reduced sodium levels by about 20 percent in recent years, and those efforts are continuing. For example, the chain uses low-fat sour cream across the menu, and guests can order dishes “fresco style,” swapping sauce and cheese for the less-calorie-dense pico de gallo.

Over the past two years, Taco Bell has been shifting away from seeing “food as fuel” and attempting to improve perceptions of the brand’s food quality. Last year, for example, the launch of the new Cantina Bell menu with celebrity chef Lorena Garcia brought in new ingredients like whole black beans, fresh cilantro and pico de gallo, which are being worked elsewhere into the menu. The three versions of the Cantina Bowl, featuring chicken, steak or veggies, for example, are all 580 calories or slightly less.

Greg Creed, the chain’s chief executive, said the Cantina Bell menu has been bringing women back to the brand, whose target audience is young men, as well as boosting food quality scores.

“It has fundamentally changed people’s perceptions,” he said.