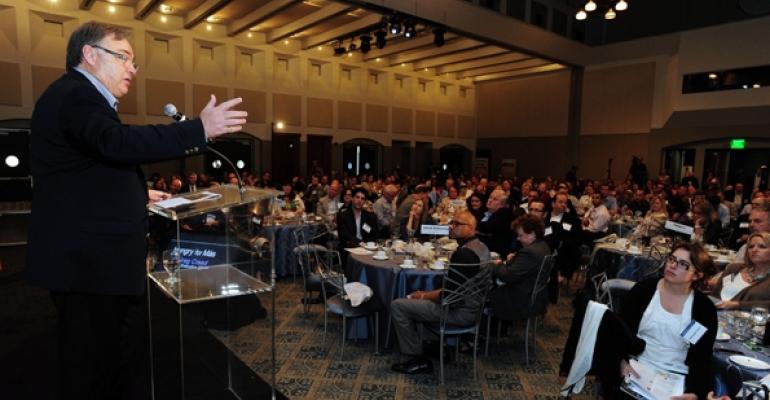 Taco Bell intends to double its domestic sales from $7 billion to about $14 billion over the next decade with more menu innovation, the rollout of breakfast and a new snack-focused afternoon “Happier Hour.”

Doritos Locos Tacos and Cantina Bell were credited with driving an 8-percent increase in same-store sales for the chain in 2012. Now, Creed said the company’s goals include growing restaurant average unit volumes from a current $1.3 million to $1.8 million over the next decade.

Moving into new dayparts will be key to growing sales, he said. Taco Bell has been testing breakfast, or “First Meal,” in about 800 locations in the West over the past year.

Creed recently said the chain has been testing breakfast with full media marketing support in three markets, and will likely be ready to roll breakfast out systemwide in the first half of 2014.

“Everyone’s saying we’re crazy because McDonald’s owns this,” said Creed, estimating that the nearly 40,000-unit burger chain sees about $9 billion in breakfast sales alone annually. “That has to stop.”

In addition, about two weeks ago, the chain rolled out its new “Happier Hour” promotion between 2 p.m. and 5 p.m., offering drinks and the chain’s new Loaded Griller items for $1.

“I like to say there used to be people in our restaurants between 2 p.m. and 5 p.m., but they were just called employees,” he said. “So we decided to put some customers in there, and it’s been a huge success.”

The successful Doritos Locos Tacos and Cantina Bell lines will also be expanded this year.

With the debut of Cool Ranch Doritos Locos Tacos last month, Creed said the chain has sold about 450 million of the tacos, including the original Nacho Cheese version introduced last spring. “At about $1.50 each, that SKU is nearly a $700 million business for us,” Creed said.

A Flamas-flavored shell is scheduled to debut in the second half of 2013. About 75 percent of Doritos chips sold are either Nacho Cheese or Cool Ranch flavor, Creed said. The Flamas Dorito chips are sold largely only in Hispanic communities. The new shell flavor was tested “in the Hispanic hotbed of Toledo, [Ohio],” he joked, “and it blew the doors off.”

Creed predicted Flamas will “have the highest depth of repeat [customers].”

In addition, a double-steak quesadilla and fajitas will be added to the Cantina Bell menu this year. “We found a way to do it so the vegetables stay crisp,” Creed said, “but I don’t want to give that away.”

Taco Bell also plans to add another 2,000 units to the nearly 6,000-unit chain, moving into more rural and suburban areas. “We think we can finally crack urban areas,” Creed said. Roughly 100,000 new employees will also be hired, he added.

Some of that new growth will be corporate, but about 85 percent will be franchised, he said. “With margins of 18 percent, that’s really exciting for franchisees who want to be a part of that growth,” he noted. “So they’ll do most of that for us.”

With its bold goals, Creed said the company has also focused on treating its employees better, which he believes translates directly to better customer service.

Recent internal research at Taco Bell indicates that customers judge how companies treat their team members, and that is a factor in their purchasing decisions, he said. On health care, for example, Taco Bell said it will not cut employee hours to avoid paying health care costs, as some companies have predicted for the industry.

“We will not take anyone who’s currently over 30 hours to under 30 hours,” Creed said, adding that the chain’s improved productivity will cover any expected increases in health care costs. “I’m convinced we will make more money because customers will rate the brand based on how they treat their employees.”

Taco Bell is also working on a new asset design, including a re-imaging program for restaurants, and its logo will be updated. “It’ll still be a bell, but it’ll look like a bell in 2013, not one from the 1990s,” Creed said.

Improving food safety is also a focus, Creed added, noting that Taco Bell has had its share of foodborne illness incidents over the years. The company is improving the way its produce is grown and processed, he said.

“We can track a piece of lettuce from the field to the restaurant,” he said. “Our belief was to be a brand that’s gone from having more than its fair share of food safety issues to one that’s trying to lead the industry to do a better job.”