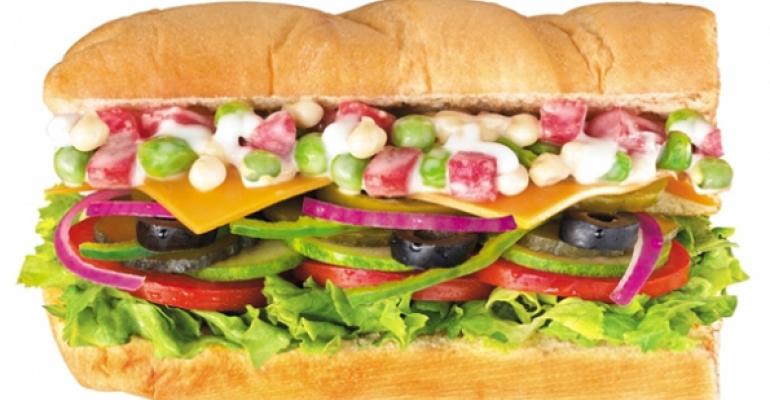 McDonald’s recent decision to open vegetarian-only restaurants in India next year will once again pit it against quick-service competitor Subway, which already has a toehold in that market.

Beginning last year, the Milford, Conn.-based Subway chain has opened three vegetarian-only locations in India, chiefly in nontraditional venues, which account for 20 percent to 25 percent of the brand’s 37,000 outlets.

Plans call for a fourth outlet to open by the end of 2012.

So far India-based franchisees have introduced all-vegetarian Subway locations in Lovely Professional University in Punjab, Amity College in Delhi, and a third unit in Gahtkopar, a suburban neighborhood in eastern Mumbai.

The fourth is expected to open next month in Fortis Hospital in Gurgaon.

Subway, which has been operating in India for about 10 years, currently has 293 units in India catering to country’s 300-million-member middle class, about 80 percent of which is Hindu and consumes no beef. As a result, no Subway locations sell beef or beef products, and all have designated counter and preparation areas to accommodate a limited menu of vegetarian items.

“Whenever we go into a country, we try to accommodate the religious and cultural nuances,” Winograd said. “India is one of the best examples of how our menu has changed. We already have quite a few items designed specifically for Indian consumers.”

While standard Indian Subway locations offer menu items made with chicken, turkey and lamb products, the vegetarian outlets offer no meat products at all.

The vegetarian-only menu includes such items as Aloo Patty, potato patties flavored with turmeric and other Indian spices and herbs; Paneer Tikka, slightly crisp cottage cheese slices marinated with Indian barbecue seasoning and cooked in traditional clay ovens; Corn and Peas sandwich, made with a blend of corn and peas with carrots in a mayonnaise-based sauce; and Veg Shammi, kabobs made from soy and lentils with garlic and onions.

All items are available as sandwiches or salads, Winograd said.

Subway’s area developer in Hyderabad, Sandeep Shah, earlier estimated that between 40 percent and 45 percent of his customers are vegetarian.

Winograd said franchisees plan to open another 35 Subway locations in India by the end of the year, and could have as many as 530 units there by the close of 2015. About 60 percent of Indian franchisees are multiunit owners with more than one restaurant.

McDonald’s, which has some 33,000 restaurants around the world, currently has about 270 branches in India. KFC has about 160 units there, while Starbucks said it plans to open its inaugural unit in October.

Subway has opened about 1,800 restaurants around the world this year, 710 of which are in the United States.