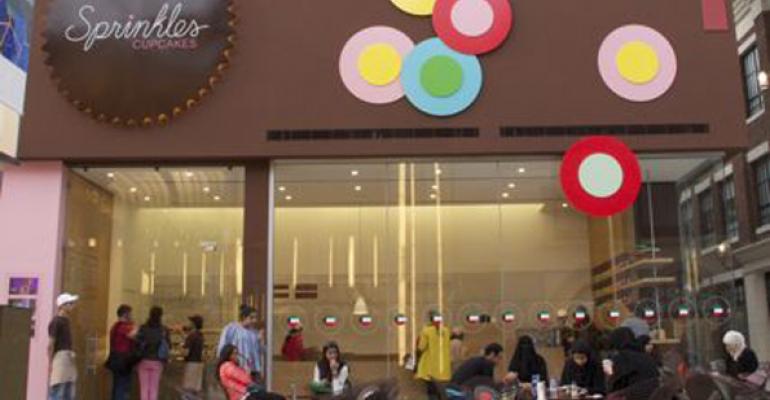 Sprinkles Cupcakes, the bakery credited with spurring a modern cupcake craze, is poised for growth with new product lines designed to build the company into a global premium dessert brand.

Sprinkles, which has 12 cupcake bakeries across the country and one in Kuwait, is planning to expand into new cities and countries this year, not only with cupcake shops, but also with a new ice cream and gourmet cookie concept.

“We want to grow as a cupcake brand, but we also want to be known as a premium dessert brand worldwide,” said Charles Nelson, president and co-founder of the company.

When Nelson first opened Sprinkles Cupcakes in Beverly Hills, Calif., in 2005 with his wife and co-founder Candace Nelson, it was one of the first contemporary cupcake-only bakeries.

With its use of top-quality ingredients and contemporary design to recreate the traditional childhood birthday treat, Sprinkles quickly became a celebrity favorite, touted by A-listers from Oprah to Tom Cruise. Candace Nelson added to the brand’s fame by becoming a judge on the Food Network television show “Cupcake Wars,” which is about to film its ninth season.

Last May, the company took its first step away from its cupcake-only focus with the launch of the first Sprinkles Ice Cream shop next door to its original location in Beverly Hills. With ice cream flavors that rotate daily, the shop was designed to complement the cupcake brand. Sundaes, for example, are made with cupcakes, and the shop offers ice cream “sandwiches” between two cupcake tops.

A new line of Sprinkles chocolate, inspired by the chain’s eclectic cupcake flavors, is coming soon to its cupcake and ice cream outlets. Other desserts, such as doughnuts, are "on the drawing board," Nelson said.

The next generation of Sprinkles

In the fall, the company will debut a new prototype location that combines the cupcake, ice cream and gourmet cookie lines in one location, which will be called simply “Sprinkles.” The first is scheduled to open in Atlanta, with another planned this year for Las Vegas, Nelson said.

The company is also working on a next-generation version of its cupcake ATM, a self-serve vending machine that has been added to select bakery locations, offering a revenue stream during off hours.

Currently, the cupcake ATMs are attached to bakeries, where they can be stocked with fresh cupcakes throughout the day and night. By late 2013, however, Nelson said the ATMs will expand to some high-traffic stand-alone locations, such as airports.

The ATM machine’s design is also evolving to meet demand, Nelson said. “The new generation machines will vend faster, and you’ll be able to buy more than one at a time,” he explained.

Eventually, the ATM machines will offer the company’s expanded line of products, including Sprinkles cupcakes, cookies, chocolate bars and even ice creams, he said. "The ATMs will even have our doggie cupcakes — cupcakes for dogs — which we now sell in our stores," he noted.

The first Sprinkles location under that deal opened in Kuwait in February, and Alshaya plans to expand the brand to 10 countries in the Middle East, with units in Dubai and Saudi Arabia up next.

Nelson said the company is looking for growth in several other regions of the world, including China, Japan, and Korea, as well as Canada, Mexico and Western Europe.

Though Nelson declined to characterize the investment, he described KarpReilly as “an amazing group with a lot of operations expertise.”