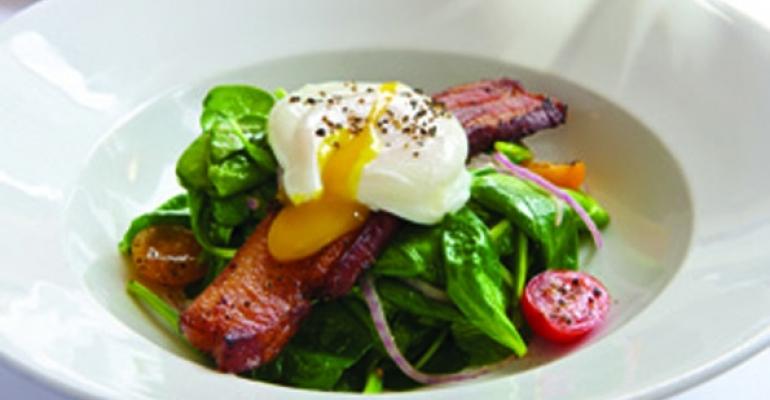 Smith & Wollensky is taking inspiration from classic European salads and appetizers with its summertime specials — including its own versions of gravlax, frisée aux lardons and salade Niçoise — as well as American staples such as crab cakes, surf and turf, and spice-rubbed meat.

The gravlax is part of Salmon Three Ways, an $18 appetizer that also includes salmon pastrami and ceviche. Matt King, the nine-unit Boston-based steakhouse chain’s national director of culinary development, said the gravlax is made by rubbing salmon with a mixture of dark brown sugar, star anise, coriander seed, citrus juice and lime, lemon and orange zest. Rum is poured over that, and the salmon is cured for 48 hours.

To make the pastrami, the gravlax is rinsed off, brushed with molasses, and crusted with a rub of peppercorn, paprika, mustard seed and coriander, and refrigerated for an additional 24 hours.

For the ceviche, th

“We’ve always had a crab cake on the menu, but we tried to really focus on showing the quality of the crab we were using,” King said. Instead of a heavily breaded cake, he said the new version is “almost more of a warm crab salad. It’s loosely held together and lightly dusted with the bread crumb.” The dish sells for $18.

Frisée aux lardons is a popular salad in France, made with chicory greens, warm chunks of salt pork and a vinaigrette, often topped with a poached egg.

Smith & Wollensky uses baby spinach instead, and thick-cut applewood smoked bacon. The salad also has heirloom tomatoes and red onion. It’s tossed in a warm sherry vinaigrette that King said “softens the spinach a little bit,” and topped with a poached egg. It is priced at $15.

Also new to the appetizer menu is a $19 barbecue wild shrimp dish. Colossal-size Mexican Gulf shrimp are marinated with smoked paprika, a house-made Cajun spice blend, lime zest, cilantro, scallion and olive oil. It is then grilled and served with a jícama-mango slaw with cilantro and a citrus dressing. The shrimp is served over a bourbon-chipotle barbecue sauce.

The shrimp, along with the jícama-mango slaw, is being paired with a 10-ounce filet mignon for Smith & Wollensky’s summertime surf and turf dish. It sells for $52.

A new coffee- and cocoa-rubbed filet is rubbed with coffee, dried porcini mushrooms and cinnamon that are combined in a fine espresso grinder and mixed with cocoa powder. The steak is charbroiled and topped with ancho chile butter made with lime juice and zest, “to make it a little more summery,” King said. It is also priced at $52.

“Coffee rubs have been around for awhile,” he added. “We’ve come up with one that adds a little bit of flavor with the porcini and cinnamon. It all complements the steak really well.”

King said they were also giving some of the rub to favorite guests and thinking of selling it on their website for customers who want to grill steaks at home this summer.

One of the fish specials this summer is a $38 sautéed red snapper served with whipped potatoes with colossal lump crab and chives folded into it, sauced with a tomato-fennel essence.

The essence is made by sweating celery, fennel, Serrano peppers, tomatoes, garlic, and Spanish onion. The mixture is further cooked with white wine and then hung overnight in cheesecloth.

“You get huge flavor,” from the liquid that drips out, King said. The fish is served in a bowl over the potatoes and the essence is poured around it.

The new $36 Tuna Steak Niçoise features all of the flavors of a traditional French salade Niçoise. It’s pan-seared and served with fingerling potatoes, green beans, olives and a tomato-caperberry relish. It’s dressed with basil and lemon-infused olive oil.

The chain also has added three cocktails for the summer, priced at $13 or $14, depending on the market.

Several new summer drinks are also featured, including those cocktails. The Hangar Lime Spritzer features Hangar One Kaffir Lime vodka, Smith & Wollensky’s “Private Reserve” Sauvignon Blanc and Lime Juice. The Skinny Rita is made with Ty Ku sake liqueur and tequila, and the Skinny Mojito is made with the same liqueur, Bacardi Limón, mint leaves and club soda.

Returning this year for the summer are favorites from last year, including a $25 lobster mango salad served with applewood smoked bacon, mango chutney, avocado aioli and crispy tortilla.

Seared scallops with a summer vegetable salad and a shooter of tomatillo gazpacho also is being reprised for $15.