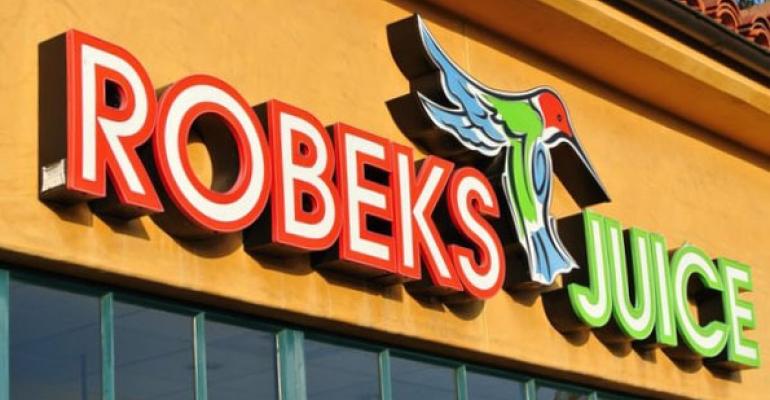 The 118-unit chain’s new menu aims to tap into growing consumer demand for Greek yogurt, touted for its high protein content, as well as fresh juice from so-called super foods, such as kale.

Davidson, chief executive of Los Angeles-based Robeks Corp., said the brand has long been known for its fresh juice blends, but demand is rising as more people replace meals or address health concerns with fresh juices.

Fresh juice sales now account for about 20 to 25 percent of sales at Robeks, up from 7 to 12 percent before the menu expansion, Davidson said.

Robeks’ U.S. same-store sales rose 6 percent in 2012 over the prior year. Same-store sales increased 15 percent during the most recent quarter, coinciding with the new menu and indicating that new offerings hit the mark, Davidson said.

“We’ve been talking about health for decades, but I think there’s a tremendous amount of enthusiasm now, particularly among younger generations,” he said. “But people are still in a hurry, so getting that cup of vegetables is very convenient.”

The new Tropi-Kale juice, made with pineapple and kale, has become a best seller, along with the Greek yogurt smoothies, Davidson said.

In its early days, Robeks saw mostly repeat customers who usually came after their workout. “Now there’s no such thing as a homogenous smoothie customer,” Davidson said.

The chain has also started posting calorie counts, though final rules for the federal menu-labeling mandate are not expected until April. “They kept putting it off, so we decided to bite the bullet and just do it,” Davidson said.

Additionally, the chain is designing a new “generation three” unit prototype this year. The new design might include new equipment, which could increase menu possibilities, such as “healthy eats.”

Like many other U.S. chains, Robeks is looking for growth overseas. The smoothie chain has two units in Japan, and Davidson said six to 12 locations are expected to open this year in Qatar, Honduras, Singapore and Hong Kong.

Robeks joins a growing number of smoothie chains that have expanded fresh juice offerings in recent months, including Juice It Up! and Jamba Juice. Starbucks has also stepped into the juice game with the acquisition of Evolution Fresh, and there are a growing number of juice bar concepts popping up across the country.