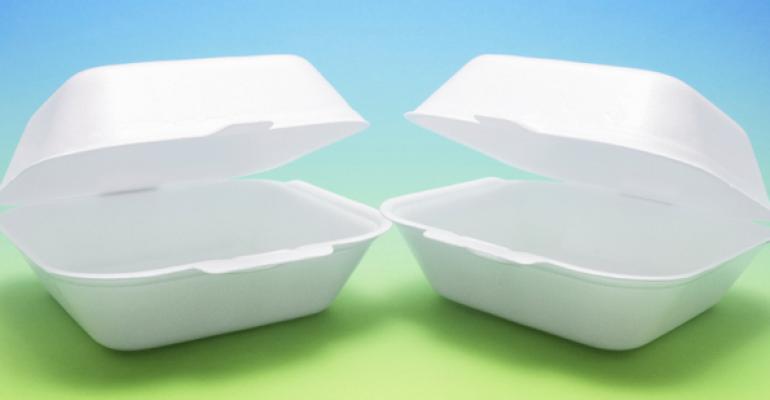 The New York City restaurant community once again found itself facing a potential new regulation when Mayor Michael Bloomberg declared in his recent State of the City address that he intends to introduce a measure that would ban the use of plastic-foam food packaging.

The proposed ban, which is expected to include cups, takeout boxes and trays, would force operators throughout the five boroughs who currently use such nonbiodegradable material to switch to potentially more environmentally friendly but expensive items, observers say.

If implemented by the City Council, New York would join such cities as San Francisco; Portland, Ore.; and Seattle that already have such bans in place.

Andrew Moesel, spokesperson for the New York State Restaurant Association, said while he has yet to see the actual proposal, he hopes that City Council members “keep in mind both environmental concerns as well the costs to small businesses.”

Plastic foam, he noted, “is clearly the cheapest option. Typical Styrofoam containers cost about seven to eight cents each in bulk; comparable paper products are about 15 cents each.”

Costs for higher-grade plastic or biodegradable containers can run as high as 45 cents per container, he added.

The National Restaurant Association also weighed in on the proposed ban, saying in a statement that while it supports the increased use of sustainable packaging, it would like to work with the city to develop “a plan that is feasible for the industry to implement and cost-effective for operators and consumers.”

Scott DeFife, the NRA’s executive vice president of policy and government affairs, also noted that in some cases, “a suitable supply of alternatives to polystyrene foam packaging does not exist or is prohibitively expensive to obtain. This could create a great burden for restaurants, more than 90 percent of which are small businesses, if those concerns are not addressed as the city moves forward.”

The Mayor’s proposal drew mixed responses from restaurant operators. Canton, Mass.-based Dunkin’ Brands Inc. franchises dozens of Dunkin’ Donuts branches throughout the city and uses plastic foam cups. “Although a viable cup solution does not exist today, we are taking a holistic approach to the issue that we believe will be more effective in the long term than a polystyrene ban,” Karen Raskopf, chief communications officer for Dunkin' Brands said in a statement.

“Dunkin' Donuts is working diligently to find a solution that's better for our guests, our franchisees and the environment. We have reviewed or tested nearly every type of single-use hot cup on the market, but a viable alternative does not yet exist,” she said. “This is a process, and we will continue to test and try new things until we find a cup that keeps drinks hot, hands cool and is better for the planet.”

Raskopf also argued that banning polystyrene “will not eliminate waste or increase recycling; it will simply replace one type of trash with another. To minimize waste in the interim, we have reduced the weight of both our foam and plastic cups and have offered our franchisees a reusable mug program.”

Zane Tankel, chief executive of Apple-Metro, a 35-unit Applebee’s franchisee based in Harrison, N.Y., said the casual-dining operator uses plastic foam containers for its takeout business. He estimated his business purchases about 5,000 cases of plastic-foam food packaging annually at a cost of about $130,000.

“We don’t see [the ban] as being a bad thing by itself,” he said. “I’m fine with it because of its intent — anything that helps the environment. But at the end of the day restaurateurs are facing a lot of [economic] headwinds — commodities increases, minimum wage, energy, Obamacare — and this makes it that much more difficult.”

“We applaud Mayor Bloomberg's goal to eliminate plastic foam food packaging in New York City,” McKerrow said. “As convenient and inexpensive as Styrofoam is, particularly for restaurants with to-go packaging, there just has to be a better way. If we as restaurant owners can come together and create demand for alternative, eco-friendly options, we can increase buying power and drive down prices — while challenging our suppliers to come up with new technologies that are kinder to the environment."

The measure is expected to be introduced in the City Council within the next several weeks, after which it will be the subject of a public hearing, and then voted on by the council.

This proposal marks the latest in a series of face-offs between New York restaurateurs and the mayor. During his three terms as mayor, Bloomberg has banned smoking in public places, outlawed trans fats in restaurants, eliminated supersized sugary beverages, and mandated that chain operators post calorie counts and other nutrition information on their menus and menu boards.

Correction: February 22, 2013 An earlier version of this article incorrectly stated that Los Angeles has a plastic foam food packaging ban in  place. Los Angeles, together with 65 other California cities, accepts foam foodservice packaging in their curbside recycling program.