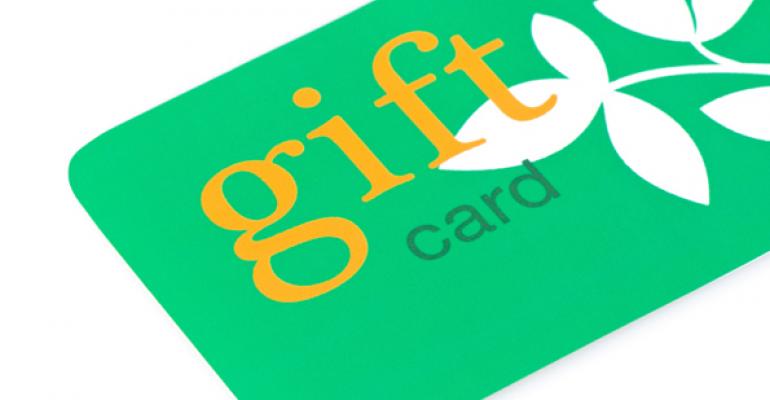 The National Retail Federation predicts that 81.1 percent of shoppers this year will purchase at least one retail gift card of some sort, spending an average of $156.86 – the highest amount in a decade. Total spending on gift cards will reach $28.79 billion this year.

According to an NRF survey released in October, close to 60 percent of respondents said they would like to receive gift cars this year, up from 57.7 percent last year. When asked what kind of gift card they planned to buy this year, those offered by restaurants were among the most popular: More than 33 percent of respondents said they planned to give the gift of a restaurant meal during the holidays.

Virtual gift cards on the rise

Increasingly popular this year is eGifting — giving virtual gift cards that can be sent by email and used at checkout with a mobile device.

In its recent report, CEB TowerGroup calls eGifting a “fledgling component of gifting,” saying such virtual gifts are projected to reach $3 billion in sales this year, about $1 billion lower than previously expected, as mobile payment trends have been slow to take off.

New to the eGifting game this year, however, is Orlando, Fla.-based Darden Restaurants Inc., which is offering both traditional and eGift cards across its primary brands, including Red Lobster, Olive Garden, LongHorn Steakhouse, Bahama Breeze, Seasons 52 and The Capital Grille.

Frozen yogurt chains Red Mango and Pinkberry are both offering eGifting for the first time as well, following the launch of their mobile apps earlier this year.

“People use their phones and computers for almost everything these days, so a virtual gift card is the perfect option for gift giving,” said Dan Kim, founder and chief concept officer of Red Mango Inc.

Through Dec. 31, those who buy $25 in Red Mango gift cards receive a $5 bonus, which can also be rewarded digitally — no need to bring a plastic card to the store. Guests can simply open the gift on a mobile device at check out.

“I think you’ll see a lot more eGifting and more integration of mobile payment,” predicted Kim. “We’re really geared toward mobile becoming the primary process for gifting.” He added that one benefit of eGifting is that guests can accumulate rewards through the Dallas-based chain’s loyalty program, and those can also be shared as gifts.

With the popularity of gift cards, a growing number of websites are popping up allowing people to sell or trade cards they don’t want. Some restaurants are taking steps to discourage consumers from buying gift cards through these third-party sites.

Chipotle Mexican Grill, for example, is offering a free burrito, bowl, order of tacos or salad to those who buy $30 in gift cards before Dec. 31. The free food can be redeemed with the original receipt from the purchase, but it doesn’t count if the cards were acquired online or through a third-party site.

Almost without exception this season, restaurant chains — from high-end independents to quick service — are promoting gift card sales through the end of the year with limited-time incentives or kick-back offers of free food, bonus cards or merchandise for the gift card buyer.

Chef/owner Joe Miller’s independent Joe’s Restaurant in the hip Venice, Calif., neighborhood of Abbot Kinney, for example, is offering a $25 bonus card for every $125 gift card purchased through Dec. 31. At the Fleming’s Prime Steakhouse and Wine Bar chain, those who buy $100 in gift cards receive a $20 bonus card.

At The Capital Grille, those who spend $500 or more on gift cards receive 10 percent on a bonus card and a free set of steak knives. At Jamba Juice, guests get a free 16-ounce smoothie if they buy at least $25 in gift cards, and Freddy’s Frozen Custard & Steakburgers in Wichita, Kansas is offering a free bottle of seasoning with the purchase of a $25 gift card.

Other chains are making an appeal to those with charitable inclinations during the holidays. Lazy Dog Café, based in Huntington Beach, Calif., for example, is making a donation to The Foodbank of Southern California to provide 30 meals to those in need for every $25 in gift cards sold through the end of the year. Gift card buyers also will receive a $5 gift toward their next visit.