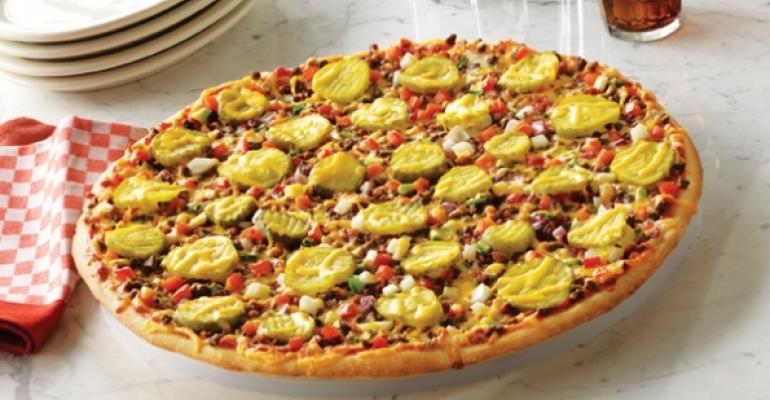 The American Pizza Community was formed last year and represents about 20,000 pizza locations around the country.

A coalition of pizza chain operators has voiced support for bipartisan legislation that would amend existing federal menu labeling regulations in the Affordable Care Act to allow for more flexibility in how calorie counts must be disclosed.

The American Pizza Community, which was formed last year and represents about 20,000 pizza locations around the country, endorsed the “Common Sense Nutrition Disclosure Act of 2013,” or. H.R. 1249, which was introduced Thursday by Reps. Cathy McMorris Rodgers, R-Wash., and Loretta Sanchez, D-Calif.

The APC’s position places it in opposition to the National Restaurant Association, which is critical of a provision in H.R. 1249 that would likely exempt a greater number of chain grocery and convenience stores from having to post standardized labeling requirements for prepared restaurant-style food.

The NRA has long maintained the need for standardized menu labeling regulations as opposed to a patchwork quilt of rules that would force chain operators to accommodate multiple state or local laws.

Many pizza operators, however, have expressed dissatisfaction with the existing federal menu labeling regulations, claiming that the current legislation does not take into account many of the differences inherent in the pizza business.

“This legislation seeks to address widespread concerns regarding the menu labeling regulations as currently drafted by replacing impractical, one-size-fits-all rules with flexible approaches based on real-world experience,” said Lynn Liddle, chair of the American Pizza Community and executive vice president of communications, investor relations and legislative affairs for Domino’s Pizza.

The current regulations — which are being finalized by the U.S. Food and Drug Administration — stipulate that chains with 20 or more outlets must post calorie counts and other nutritional information on in-store menus or menu boards adjacent to where customers place their orders. Critics of the measure maintain that most customers of delivery-based chains never even step foot in the stores. The new regulations would allow restaurateurs to provide calorie information on a remote-access menu for those customers who are ordering off-premise.

The new legislation also would provide flexibility in posting caloric data for variable food items like pizza, where many toppings, crusts and sauce can result in millions of ordering options. H.R. 1249 would allow operators to provide calorie information either in ranges, averages, individual component labeling of ingredients or labeling of standard menu offerings.

In addition, the measure would enable operators to provide calorie labeling by the slice as compared with whole pies, as the current law states.

“This would allow for more flexibility for everyone,” said Jenny Fouracre, director of investor relations and legislative affairs for Domino’s Pizza. “It would apply to anyone who has customization or carryout and delivery issues.”

Strong voices on both sides

Scott DeFife, executive vice president of policy and government affairs for the NRA, maintained that the association does not oppose any of the provisions favored by the APC in H.R. 1249. “We agree with the need for flexibility, about standard builds [the finished version of a menu item], about not having to label every [menu] variation,” he said. “But, in fact, the proposed regulations don’t call for that. They don’t propose that you have to label every single pizza. We support [the APC] — but, in fact, [the provisions [they want] are already in the base bill.”

What the NRA objects to, DeFife continued, is the provision in H.R.1249 that would codify “a bad definition” of “similar retail establishments,” like convenience or grocery stores that also offer prepared restaurant-style food. The measure states that a retail food establishment that derives more than 50 percent of its total revenue from the sale of restaurant-type food would need to comply with all menu labeling requirements. However, DeFife said, that revenue test is completely unrealistic and would exempt many retail food purveyors, thereby preventing consumers from having ready access to the kind of nutritional information mandated in restaurant chains.

In a letter to lawmakers opposing H.R. 1249, the NRA stated the bill “would create an unlevel playing field between restaurants and other entities that serve restaurant food, casting different requirements depending on where you purchase the food.”

Meanwhile, DeFife said the issues supported by the APC can be addressed by the FDA through rulemaking rather than through legislation.

The FDA is currently in the process of crafting the final rules for menu labeling and is expected to present them sometime this year. However, FDA commissioner Margaret Hamburg recently said in an interview with the Associated Press that the process “has gotten extremely thorny.

“There are very, very strong opinions and powerful voices both on the consumer and public health side and on the industry side, and we have worked very hard to sort of figure out what really makes sense and also what is implementable,” she said.

H.R. 1249 replaces an identical measure — the “Common Sense Nutrition Disclosure Act of 2012” — which was introduced in the U.S. House of Representatives and Senate last year but expired.