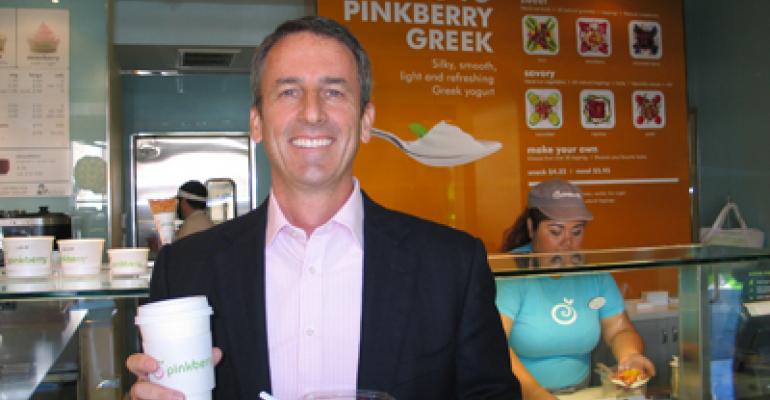 Pinkberry wants to become the destination for yogurt.

Not just the frozen yogurt the chain has been known for, but a new Greek yogurt — both sweet and savory — that is not frozen. It will also available for new breakfast hours, as well as throughout the day.

After testing a new Greek yogurt platform since late May, the Los Angeles-based frozen yogurt chain is rolling out the new addition to select stores in Los Angeles, Boston and Washington, D.C. this week.

The Greek yogurt is currently available in about 17 units, and more locations are expected to add the platform along with earlier opening hours that begin at 8 a.m.

The goal, said Pinkberry chief executive Ron Graves, is to tap into the growing interest in Greek yogurt, a product that now accounts for about 35 percent of yogurt sales across retail channels.

A growing number of frozen yogurt chains are adding Greek yogurt to their menus, responding to the growing popularity of the higher-protein product as a meal replacement. TCBY, 16 Handles, and Ben and Jerry’s have introduced new frozen Greek yogurt flavors this summer, but generally as a sweet and later-daypart snack.

“Our challenge is that we’re offering an authentic Greek yogurt, not a frozen version,” said Graves. “We’re still learning and getting feedback from customers about what they like. But the response so far has been great.”

Adding the breakfast daypart also made sense, given how many customers would order frozen yogurt when stores first open at 11 a.m., said Graves.

A growing number of American consumers eat Greek yogurt for breakfast, said Graves, but the goal is to market the new platform as a meal replacement or snack later in the day as well.

The yogurt is nonfat and low in sugar. A six-ounce serving has about 18 grams of protein and about 100 calories, said Laura Jakobsen, Pinkberry’s senior vice president of marketing and design.

At Pinkberry, guests can select any of the same toppings available for frozen yogurt for the Greek version, including fruit, nuts, granola or natural sweeteners like fruit purees, infused honey or agave nectar.

In addition, Pinkberry is offering a line of savory Greek yogurt toppings, with signature options such as the combination of fresh cucumbers, sesame nuggets, red and yellow diced peppers and a drizzle of honey and chili powder; or almond pesto with sliced almonds, tomatoes, olives and a pinch of sea salt.

The rollout also includes the addition of brewed coffee and espresso. The chain is using a proprietary medium roast brew, available hot and iced, with flavored options such as a mint iced coffee available.

Pinkberry is partly owned by venture capital firm Maveron LLC, which was co-founded by Starbucks’ president and chair Howard Schultz.

Graves, however, said the coffee is not affiliated with Starbucks. It’s a blend of coffee beans from Sumatra and Colombia with a sweeter taste profile, he said.

Pinkberry’s coffee prices start at a recommended $1.50 for a regular cup and $2.50 for a latte.