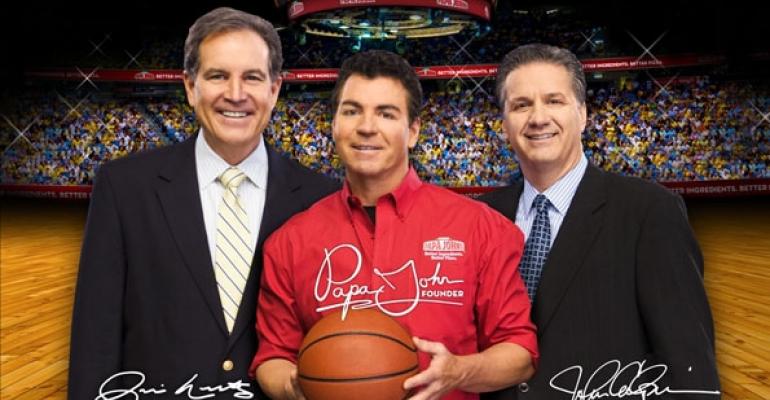 Offer rivals that of Domino's, the tournament's official pizza sponsor

Now through April 8, the day of the national championship game, fans who order at least $11 worth of food on PapaJohns.com can enter the promo code “HOOPS” to receive an offer for a free large pizza with up to three toppings on a future order. The freebie must be redeemed by April 28.

The 64-team tournament tips off Thursday in venues across the nation, but Papa John’s is introducing its offer the day before with commercials featuring founder and chief executive John Schnatter, CBS sportscaster Jim Nantz and University of Kentucky head basketball coach John Calipari.

“This is an exciting time of year for every basketball fan, and we are pleased to add to the excitement by offering a free pizza to our loyal customers,” chief marketing officer Andrew Varga said in a statement. “No matter how your team fares on the court, you’ll be a winner with this great offer.”

Louisville, Ky.-based Papa John’s is no stranger to this sort of offer. For the past three years, the brand has been the official pizza sponsor of the National Football League and the Super Bowl, a partnership it recently extended. Papa John's has also staged a national free-pizza giveaway for the Super Bowl during the past three years, including the past two seasons with commercials starring quarterback Peyton Manning, who is now a Papa John’s franchisee.

Domino’s Pizza, meanwhile, is in its second year as the official pizza sponsor of the NCAA basketball tournament. This year, the brand reprised its March Madness Perfect Combo for $19.99, which includes two medium one-topping pizzas, a 16-piece order of Parmesan Bread Bites, one order of Cinna Stix and a two-liter bottle of soda.

Not to be outdone by competitors running their own creative promotions, Domino’s announced this week another aggressive value offer for basketball fans: 50-percent off pizzas ordered online at menu price through Sunday, March 24, the first full weekend of March Madness.

Both Domino’s and Papa John’s have remarked in recent quarterly earnings calls that digital ordering accounts for more than one-third of their domestic sales.

In North America, Papa John’s operates 648 company-owned units and franchises another 2,556 locations in all 50 states. Its international system comprises 959 restaurants in 35 countries.