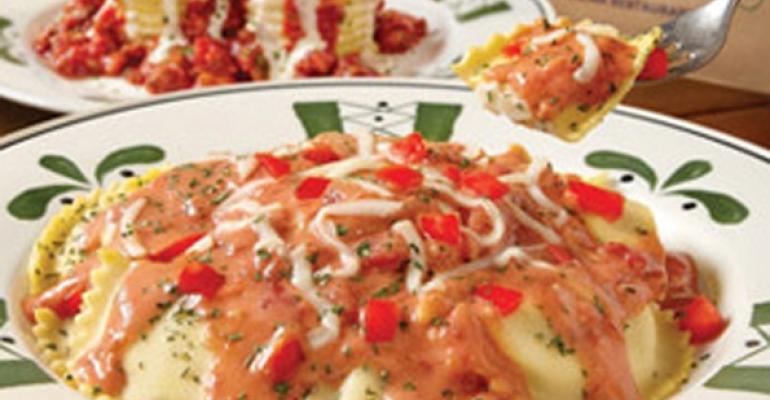 Olive Garden debuted this week a lighter-fare menu section, Porta Vita Signature Wines, and a limited-time “Dinner Today & Tomorrow” promotion alongside the brand’s first new television advertising campaign in 10 years — all of which is expected to drive sales at the struggling casual-dining restaurant chain.

The new menu will feature a section titled “Lighter Italian Fare” that features five entrees with fewer than 575 each. The entrees in the lighter-fare section are seafood brodetto, herb-grilled salmon, lasagna primavera with grilled chicken, linguine alla marinara and Venetian apricot chicken.

Concurrently, Olive Garden announced its new “Dinner Today & Tomorrow” promotion, which offers two dinners for $12.95 — one at the table and one packed up for the guest to take home. The deal is similar to Maggiano’s “Classic Pastas” take-home pasta promotion, first introduced during the recession in May 2009. The promotion was such a success that the company decided to make the promotion permanent.

Although executives at Darden could not immediately be reached for comment, industry experts suggested the changes may be a reaction to struggling sales at the Olive Garden brand. During the first quarter of 2013, Olive Garden reported a 0.3-percent increase in same-store sales, its first positive same-store sales report in a year and a half.

After earnings report Miller Tabak + Co. analyst Stephen Anderson wrote: “We argue the worst is over for Olive Garden, and as that concept continues to reassert its value heritage with a revamped menu and new messaging in the next couple of quarters, we anticipate continued momentum on same-restaurant sales.”

“It’s important that we continue to innovate to meet the changing needs of our guests,” said Jay Spenchian, Olive Garden’s executive vice president of marketing in a statement.

The advertising campaign, called “Go Olive Garden,” highlights the chain’s menu and promotional changes. In separate spots, the campaign features a woman stretching in yoga pants to illustrate the fact that the menu caters to health-conscious consumers, and a couple sitting down to eat Olive Garden’s food in front of their television, highlighting the company’s take-home dinner promotion.

“We believe this new campaign better reflects Olive Garden as a lively Italian gathering place where out guests can enjoy spending time with family and friends,” Spenchian said in a statement.

The ads are a departure from the company’s long-running “When You’re Here, You’re Family” campaign.

“One word I would use to describe [the campaign] would be aspirational,” said Dan Dahlen, chief executive officer of Dahlen Communications Inc., a branding and advertising company. “It seems to be moving from a very family-focused type model to a young, vibrant, on-the-move, watching-what-you-eat, careful-of-calorie-intake kind of target.They’re definitely wanting to expand their base beyond an aging boomer brand to be a more hip, relevant brand.”

The ad campaign, however, might be giving too many messages at once, Dahlen said. “The problem with that is that you don’t take away the one thing they really want you to focus on,” he noted. “I have no idea what their one thing is.”

Jay Spenchian, Olive Garden’s executive vice president of marketing, said in an e-mail that these menu changes are "only the first phase of a significant menu transformation" planned for Olive Garden. “During the next year, we’ll continue to evolve our menu, and the changes we’re making will result in the most comprehensive transformation in the brand’s history,” he said.

Editor's Note: This article has been updated with additional commentary from Olive Garden executives.