The changes revealed at that location will be rolled out to all of the chain’s units throughout 2013 and the beginning of 2014, according to Hazem Ouf, president and chief executive of American Blue Ribbon Holdings, a subsidiary of Fidelity National Financial Inc., which bought O’Charley’s earlier this year.

The reason for the revitalization is, in part, to attract more franchisees and to expand the O’Charley’s brand, Ouf said. “O’Charley’s is our largest brand, with 220 restaurants and nearly half a billion dollars in revenue,” he noted. “So, clearly, it’s a priority for us to get our arms around this brand.”

A highlight of the redesign is the company’s new logo, which is more modern, he said. “It’s also a little easier to read from a signage perspective,” he said, adding that in the new logo, the “O” in “O’Charley’s” is more clearly offset. 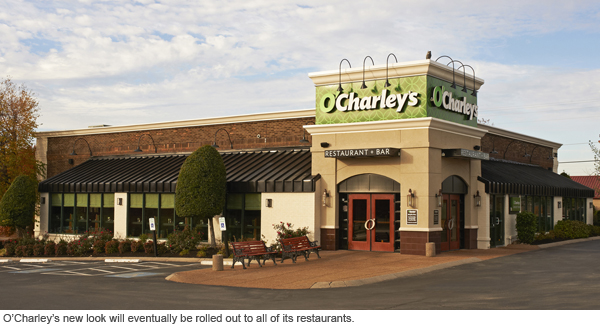 “It has not really changed for 40 years,” Ouf said of the brand’s logo. “The logo is the element that’s going to signal that O’Charley’s is changing.”

In addition, the redesigned stores will have different rooms named after O’Charley’s Southern heritage, such as “The Piedmont” and “The Porch.”

The new floor plan is also open, providing a clear line of sight from the tables to O’Charley’s bar area, the company said in a statement. The redesigned locations will also feature more booths for guests and more floor space to accommodate larger parties.

The menu at O’Charley’s has also been revamped, with Southern items like Crispy Pickle Chips, Honey Drizzled Southern Fried Chicken and signature pies, such as Country Apple and Ooey Gooey Caramel. 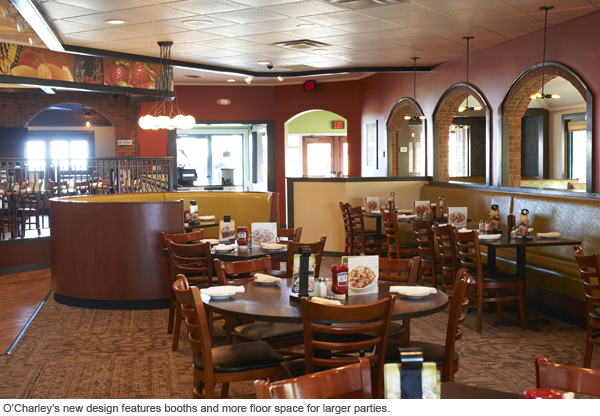 “O’Charley’s culinary approach should be classic American fare with a Southern twist,” Ouf said. “We’re doing an exhaustive quality improvement initiative throughout the menu, from soups to dressing to an entire new burger.”

The company will also experiment with half-portion menu items, lunch-portioned menu items and smaller entrees, he said, to give guests greater variety and choices.

On average, the changes will cost $250,000 per store. Franchisees, Ouf said, are responsible for paying their own redesign costs.

In May, O’Charley’s closed 14 underperforming locations in Wisconsin, Alabama, North Carolina and Indiana.

“O’Charley’s needed a revitalized look and feel,” Ouf said. “It’s very important for us to ensure that this concept is heading in the right direction.”

O’Charley’s was founded in 1971 and is based in Nashville, Tenn.