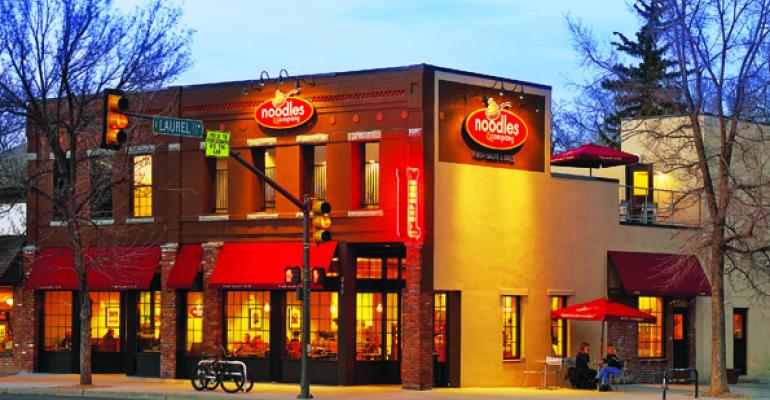 The fast-casual Noodles & Co. pasta chain is testing a new not-quite-full-table service format in the evenings that aims to build dinner sales.

The program, dubbed Noodles PLUS, an acronym for Please Let Us Serve, is currently being tested in five units in Colorado, Maryland and Illinois, and will expand to all locations in North Carolina later this summer, said Jill Preston, Noodles & Co.’s director of corporate communications.

Under the program, restaurants will add hosts to the dining room floor starting around 4:30 p.m. Guests will still order their meals at the counter, but the host will welcome diners; get water; and offer to get another beverage, coffee or dessert, so that customers don’t have to get back in line at the counter.

Noodles & Co. has long offered beer and wine, but the chain is also testing an expanded wine program with new labels — such as Clos du Bois Chardonnay and Dreaming Tree wine from musician Dave Matthews’ vineyard — as well as new craft beers.

Wines are available by the glass or bottle, as well as a half carafe. The chain is also testing new upgraded glassware, and the wine and beer options are more prominently displayed.

Also in test is a platform of plated desserts, such as a tres leches cake with vanilla cream and strawberries, a carrot cake and an Italian double chocolate cake. In the past, desserts have been more grab-and-go, such as Rice Krispies treats or cookies.

The idea, said Preston, is “to make that dinner experience a little nicer for when people have time to sit and hang out.”

A growing number of fast-casual chains are looking at “flex-casual” formats, offering counter service by day and full table service at night.

Preston said Noodles & Co. is not looking to fully staff its restaurants with servers at night, but the expanded service offerings will help the chain compete with casual-dining competitors.

“It’s similar to casual dining, but for consumers it means paying about 30 percent less on menu items, and they don’t have to tip,” said Preston.

Some of the test locations are looking at offering the expanded table service all day, not just at night, Preston said.

While still preliminary, the company is expecting to bring the Noodles PLUS test to more locations beyond North Carolina this year, with the potential of a systemwide roll out next year, she said.

“Early indications are that it’s working,” said Preston, though she declined to offer details on sales. “We’re meeting our targets and seeing a lot more in alcohol sales.”

Broomfield, Colo.-based Noodles is on schedule to open its 300th restaurant in July, with another 30 expected to open this year.